There is a reason people with low IQs are happy. I'm talking about people with Down's Syndrome, the clinically retarded, etc. Public perception conceives of them as simple, happy people. There are things that might make them sad, but they are capable of finding joy in so many things. They often seem happier than the average person.

That is because they cannot comprehend the evil and cruelty of the world, and the blackened souls that inhabit it. Psychologists tell you to ignore the terror and entropy that eats away at your heart like cancerous rust--the people who face reality down often succumb to madness, so the best way to avoid that madness is to pretend the world is happy and bright.

Noir film and fiction denies us that fantasy. Noir isn't escapism. It is an embrace of the black nightmare that resides at the depths of the human soul and rattles all of our cages with it. In reading it, you are engaging in a theraputic act. The pain of others gives you joy, even if those others are fictional. The effect is cathartic. The schadenfreude that you experience is bittersweet. You feel pity for the characters. Perhaps even remorse. But that remorse and sadness for them is what draws out the feeling of satisfaction. Because there is no closure for them. 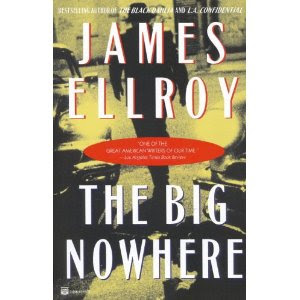 James Ellroy's The Big Nowhere is probably one of the best noir novels I've read so far. Ellroy most certainly the greatest writer of hardboiled fiction alive today. His writing is exquisite, to the point, perfectly balanced. It hits you like rapid-fire shots to your ribcage. The action begins slow, like a train, but not boring slow. There's always tension, even with the first sentence, palatable, hovering around the book, making it vibrate in your hands. The pace is not lethargic, it is inevitable. The slow beginning only serves to make the action more frantic later.

And it isn't much later. Soon, you are standing alongside the characters, watching the world inevitably spin out of control. And, not unlike Philip Marlowe or Sam Spade, these guys don't always come out on top. They aren't always the winners. Oftentimes, their victories are hollow, but more often, they aren't even victories at all. And everyone inevitably suffers.

I don't want to give anything away, just in case people actually read the book. But it is seriously recommended. So far, Ellroy is proving to be the culmination of everything that noir and hardboiled crime fiction could ever aspire to be. It is gritty, dark, nasty, filled with vice, sin, sex, racism, hate, and the black and dirty depths of the human psyche. He goes places that Hammett and Chandler didn't. Maybe you can argue that Chandler and Hammett didn't have to go there, didn't have to resort to that sort of depravity, and I'd agree, they didn't. But Ellroy does, and it isn't because it sells books. It is because he must delve into those nighted vaults in the uttermost depths of the twisted human heart. It's there. Everyone ignores it. Everyone hides from it. Except him. And he isn't a good little boy like the psychologists say. He dives in and pulls up the slag-covered morass of putrescent hate and evil that each one of us buries deep down in the crushing depths of ourselves and holds it in the sunlight where we can't look away.

And I love him for it. He writes the sort of book that I only wish I could. He is not a happy man. Neither am I. And if you read about him and his life, he takes his place among some of my favorite writers--men deeply disturbed by the horrors and realities of our true selves.

So, I've got my copy of The Big Nowhere, and thinking about reading it again. Especially for the catharsis. Ellroy writes one of the most sublimely tragic scenes of perfect, pure despair that I've ever read in a book. It's incredible. And it's next on my list for a re-read.
Posted by Dave Cesarano at 2:44 PM