To continue with my analysis, today we're going to be discussing the theme of war in Super Dimension Fortress Macross. 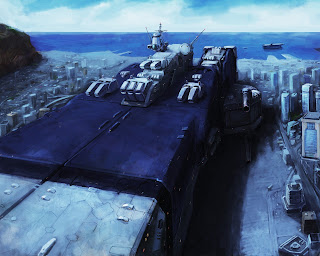 THE SPACE WAR
The entire frame in which the personal drama takes place in Macross is the overarching drama of a sudden and incredibly destructive war between humankind and the Zentraedi.  The shadow of the Pacific War stretches forth from the Japanese psyche to loom heavily over the series.  The tremendous loss of life, property and infrastructure from the firebombings of major cities and the destructive atomic attacks on Hiroshima and Nagasaki are reflected by the bombed-out buildings on South Ataria Island, the destruction of a city due to a barrier malfunction, and eventually the annihilation of almost every population center on the planet during an orbital bombardment (see this video, which is taken from the Robotech adaptation).

The YouTube video here (fast-forward to about 2:00), although from the film Do You Remember Love? and not the series, reflects the sense of defeat and futility against the inexorable Allied advance in the later years of the Second World War.  In Macross, the enemy is an indescribably powerful force, nigh unstoppable, a literal race of giants to be compared to the proverbial "sleeping giant" that Admiral Yamamoto Isoroku warned that Japan had awoken at Pearl Harbor and "filled with a terrible resolve."  This defeat had an incredible impact on the Japanese psyche, much more profound than the American experience in Vietnam.  In a sense, the entire society took on that proverbial "thousand-yard stare" of a shell-shocked survivor.  Other films, such as the original Gojira, Akira, or Nihon Chinbotsu (Japan Sinks) explore this sense of destruction and national annihilation--something that, ironically, is very much a revitalized concern with the worsening of the ongoing Fukushima nuclear catastrophe.

The Zentraedi have a powerful galactic armada far beyond comprehension.  Their resources are immeasurable and twice in the series (the second occasion being Earth) a mere fraction of their total military strength bombards a planet's surface into barren, cratered desolation.  The ignorance of the U.N. Spacy regarding the power of the Zentraedi matters little, in fact, throughout the entire series.  From a military standpoint, the Earth is an insignificant backwater.

The strange truth where both Earth in Macross and Japan in reality have power are not through military might but through culture.  How poetic, then, that Macross would have such a phenomenal impact across the Pacific in the very nation which had bombed Japan's cities.  Although this indubitably stretches the metaphor far, far beyond the intentions of Kawamori, if the Zentraedi are a sort of stand-in for the United States and the Earth for Japan, then anime in general is music and Macross in particular is Minmay.  Animation has perhaps done more to foster positive feelings towards and interest in Japanese culture throughout the West than any number of 19th century linguists and scholars ever achieved.

There is much more to the conflict than a mere metaphor that explores Japan's experience with war, destruction, and rebuilding.  Although I will go into greater detail about the following in a future post, allow me to briefly discuss the impact of warfare with regards to the society of the Zentraedi species.  The Zentraedi also represent a society that is, in some ways, more of a mirror for Japan's own than of any Western nation.  Japanese society is infamous for being very homogeneous (although I would argue that Korean society is more so).  The group takes precedence over the individual, who must submit their own feelings and desires to the group in order to attain  和 (wa--social harmony).  To a Westerner, this may sound quite oppressive but in reality it is a common feature of all societies--Japan simply exhibits a more defined and elevated manifestation of the concept.  Those in Japan that tend toward individuality or sub-cultural interest (especially otaku) can find themselves socially ostracized for expressing their uniqueness.  "The nail that sticks up gets hammered down" is a common proverb attributed to Japanese society.

The Zentraedi are a reflection of an extreme version of this group-identity.  Hierarchy is paramount.  The Zentraedi are cloned, not bred.  Each clone is genetically engineered for a singular purpose in the military hierarchy of the species (officer, soldier, pilot, adviser, fleet commander, etc.).  Their entire purpose is to fight.  The culture and society that created them has long since gone extinct and only relics persist (such as the gigantic ship-producing facilities).  No engineers or scientists are to be found in the ranks of the Zentraedi, so no new technologies are developed and nothing is ever repaired (although the ships themselves seem somewhat capable of "healing" damage given time).  Nor are there entertainers, poets, writers, philosophers, or artists of any sort.  The entirety of Zentraedi "culture" is geared towards military conflict.  Their entire existence is predicated upon conquest and battle.

Macross does not simply spoon-feed the viewer with a "war is bad" theme.  Kawamori produced a narrative that is far more complex than that and wrestles very deeply with the occasional necessity of war juxtaposed against the stupidity and ignorance of blindly choosing war without considering its consequences.  Characters like Lynn Kaifun are very representative of anti-war movements (especially anti-Vietnam War protesters) during the mid-to-late 20th century.  It is ironic that Kaifun, for all of his posturing, is a master martial artist that does not hesitate to use his skills to subdue rowdy customers and stars as the hero in a wuxia-style martial arts action film.

Kaifun is disingenuous and self-serving.  He despises the military and accuses soldiers of being "warmongers."  He exhibits no gratitude towards the pilots or officers who sacrifice their lives in order to protect the Macross and its precious cargo of civilian refugees.  It is clear to the viewer that Kaifun is both ignorant with regards to the realities of the conflict against the Zentraedi and is uninterested in being properly informed.  His mind is made up.  His relationship with Minmay develops in very unhealthy ways and he grows into a very disappointed, alcoholic and abusive person.

Macross' depiction of Kaifun is not-at-all flattering.  He is not the stereotypical heroic hippy that swoops in and disabuses the characters of their "evil, capitalist notions" and single-handedly dismantles the military-industrial complex of the U.N.  (The Zentraedi cannons are far more effective, more's the pity.)  Hikaru and company are engaged in an existential conflict--survival is the reason they are fighting, not economic gain, resource acquisition, or imperial power.  He serves as the foil to Hikaru on three levels--with regards to Misa, Minmay, and the war itself.  Through Kaifun, Hikaru's heroism is enhanced.  Kaifun possesses all of the traits that would make him a hero but he chooses to persist in naive idealism, assuming that the characters prefer war as opposed to their true desire for peace.  When Kaifun says, "War is not the answer, it only serves to strengthen those in power," we may recognize that he's right, but we know that his reasoning is flawed and his personal agenda is highly suspect.

The war was not chosen by Earth, Captain Global, or the U.N. Spacy.  This war arrived at their doorstep and they choose to fight because there does not appear to be any option of surrender.  Indeed, their ignorance of the enemy makes any option of surrender highly dubious and so they persist in fighting.  Ignorance is a powerful weakness and every opportunity Global and his crew have to learn more about their enemies is seized.  When Misa, Hikaru, Max, and Kakizaki escape from Britai's flagship, they return with a great deal if information that eventually leads to the hope that a peace may be brokered between the two.

Kawamori demonstrates that war may be necessary at times in self defense.  Learning about one's enemy, however, may plant the seeds of peace between the two.  Doing so, however, may threaten the established hierarchy.  The current U.N. Spacy high command is loath to consider peace talks because of their trump-card--the Grand Cannon in Alaska.  Similarly, Boddole Zer realizes the threat that human culture presents to the Zentraedi and seeks to annihilate the Earth and destroy those Zentraedi exposed to culture in order to preserve their strict militarized existence.  Both are blind to what is really best for their own species because they cannot see past their own fears and vested interests.  This is a very common problem with political authority--from the Roman Republic to the Japanese military government during the early 20th century to modern American politics.  Kawamori doesn't shrink from this and paints these characters as understandable but still tragically blinded to their own catastrophic failings.

The consequences are tremendous.  Victory is achieved for the Macross but the cost is nearly total extinction coupled with the near-total annihilation of all life on the Earth's surface.  What is both surprising and brave of Kawamori's vision is that Macross continues on after the eponymous vessel lands on the devastated Earth like Noah's Ark (in a crater instead of on a mountain) and disgorges humankind upon the surface to resuscitate and repopulate the world.  Instead of ending here, though, the narrative forges ahead, giving the viewer the full scope of the consequences of victory.  These consequences give value and meaning to the triumph against the Zentraedi.  Reconstruction is not easy and no one gets the Hollywood ending.  Life goes on and everyone is forced to rebuild and readjust--especially the Zentraedi.

The most tragic victims of both the war and the eventual victory of the Macross and her allies are the Zentraedi.  The readjustment that the Zentraedi are forced to endure is tremendous.  Although many come to enjoy their new cultured lives a sort of existential ennui sets in for many of them.  Since battle was all that they knew and was their purpose, without a commanding hierarchy over them providing direction and a strict chain of command, many of the Zentraedi become disgruntled and listless, turning to violence and raiding as a means to try and reachieve their lost sense of purpose.  Many of them become a sort of "lost generation" in the post-Great War sense.  Even though rebellion will result in death, that death in battle seems preferable to a meaningless existence.  I am reminded of reading about the many veterans of war who returned hope with severe cases of post-traumatic stress disorder and am certain that Japan's own experience with Pacific War veterans discharged after the United States' victory and the horrific price Japan paid in defeat deeply inform Kawamori's depiction of the Zentraedi after the Space War concludes.

This also leads into a discussion regarding the value of individuality and the responsibility for each person to choose their own purpose in life and to pursue it, and will be touched on in greater detail in future posts.
Posted by Dave Cesarano at 4:58 PM

Hi, Yun-ho! I saw your email and sent one to you. I don't know if it worked. So, I sent a new email from my other address.

I've really enjoyed your Macross posts - I hope you resume writing about the series soon!