Introduction
The Harem Problem
The Harem is a common trope in Japanese manga and anime.  From Ranma 1/2 to Genshiken Nidaime itself, the harem situation is often used in a sit-com manner.  The thing is, Shimoku is turning this trope on its ear.  Since Genshiken and Genshiken Nidaime are "slice-of-life" and strive somewhat for a realistic depiction of otaku interrelations within the larger macrocosm of Japanese relationship dynamics, Shimoku is constantly struggling against the tyranny of trope and audience expectation.  What makes things more interesting is that the characters are genre-savvy.  They become aware of the harem situation and begin to take actions in accordance with this awareness.

Japanese society is predicated upon the maintenance of harmony between all the members of a social group.  The harem situation is humorous from a Japanese standpoint because it creates a uniquely Japanese problem--how to maintain the status-quo between members of one's social circle when a number of females are crushing on a single male (note that the reverse-harem situation is not unheard of--not by a longshot).  That status-quo is harmony.  Thus, how does one maintain that harmony, especially if one is the singular object of romantic affection?

To an American, this situation is easily resolved.  Who do you love?  Pick her (or him) and the rest just have to get over it.  This has happened constantly before my eyes in high school and college.  Sure the status-quo is disrupted and harmony broken but just as often than not, people find a way to recover and preserve the social circle without the sense of weirdness and alienation.  We're far more used to the boat getting rocked, even though (given the situation) such boat-rocking may often be seen as bad form.  We're more forgiving, especially depending upon the situation when the boat is rocked.  We ask ourselves, "Was the boat-rocker justified in doing so?  Do they have a good excuse?"

In Japanese society, so much social capital is based on maintaining tatemae, face, and an avoidance of shame, that harmony becomes integral to every single social situation.  Criticism is not well-received, even between friends (indeed, less-so than in American society) unless very, very serious social and linguistic precautions are taken.  Hurting someone else's feelings is a moderate faux-pas in American culture--in Japanese society it is a grave offense.

What does this have to do with Genshiken Nidaime?  Simply put, Madarame has been placed in a situation that is far, far beyond his capabilities of handling.  And he knows it.  The poor guy is in so far over his head that it is a serious problem.  While Shimoku may be playing with the harem idea and its lampshading for laughs, the situation that the character finds himself is potentially destructive and could result in his alienation from anyone and everyone for whom he cares.  The stakes are incredibly high for Madarame and this is no laughing matter.

Mada's Dignity
Put simply, Mada has none.  Mada has no tatemae.  Mada is stripped, weak, and open.  Vulnerable.  These things are absolutely dangerous in Japanese society.  As my friend once said, a girl won't even admit she likes a guy but instead frame it as a double-negative: "I don't not like you."  There's always that shield, that barrier, that (to crib from Anno Hideaki) A.T. Field (you see what I did there?) between two people in Japanese society.  Trust is paramount in being able to reveal honne.  Unfortunately, Mada has no tatemae.  He has no defense.  He's honne to everybody.

The most poignant moment is when Mada is shot down by Saki.  He's crushed on her since very early on in Genshiken.  She was always with Kousaka and Mada came off as this creepy otaku guy who masturbates to cartoon porn.  He'd go off on long soliloquies (much to Saki's annoyance and disgust) in order to push her away as a form of self-protection.  This is a defense-mechanism.  Girls aren't yucky and have cooties but instead are this mythical creature that exists somewhere else, somewhere where the guys are handsome and athletic, in shape, tall, cool, attractive and completely and utterly unlike the guys in Genshiken.  Many geek girls complain about how they're perceived and treated by geek guys but what they don't understand is that none of these guys have any idea how to relate to actual women.  Tanaka and Sasahara both manage to make the adjustment and get girlfriends but that step actually helps them overcome their situation and begin to view women in a much more egalitarian manner.  It is through their relationships that they achieve that maturity.  Madarame gains no such advantage.


To overcome his social dysfunctions and his romantic disabilities, he cloaks himself in a tatemae intended to reinforce the disgust of females.  In doing so he exercises a degree of choice, of free will.  He cannot get a girl to actually like him but he can make her find him repulsive.  When given a choice between "do nothing and fail" and "do something and fail gloriously" Mada chooses the latter.  So long as failure is his conscious decision, he can exercise agency and is therefore empowered.  He is not a victim of social prejudice and misunderstanding.  While this refusal is empowering in that it allows him to keep his own sense of dignity through an act of free will, it is a hollow victory, a Maltese Falcon ending where Sam Spade surrenders love because he cannot bring himself to trust.  It's not healthy but it is what he has.

All of this comes crashing down when others gradually clue into his crush and orchestrate his "confession" of love to Saki.  I almost cheered when instead of confessing he attempts to maintain his dignity by saying "you had a hair sticking out of your nose."  Bravo, Mada!  You already know you don't have a shot with her, accept it, move on, and keep your dignity!

But I'm an American.  The Japanese don't approach things in that manner.  Mada would have continued to carry a torch for Saki and not been able to move on.  This I realized in retrospective.  Mada needed to be shot down.  I may be wrong in seeing this as a part of the Japanese character--as an American, I'd have told Mada to get over Saki and move on.  Perhaps Mada needed to be shot down because he is Mada, or perhaps because he's Japanese.  I am not sure where the one starts and stops, blends into the other, etc.  I'm not Japanese so my insight here is limited.

Anyway, Saki shoots him down and leaves him with no illusions.  Mada must douse the torch.  Now he can grow and move on.

And he's met by all of his supposed friends and... .  I found the reaction absolutely repulsive.  Again, maybe it is because I'm an American and not Japanese but Sasahara's sister does her utmost to utterly humiliate him.  She cheers that he got his heart broken.  No one stops her, no one says anything about it and his male friends don't come to his rescue in any way.  They don't extradite him from the situation as quickly as possible and get him into a new situation where he can a) get his mind off of what just happened and b) rebuild his dignity.  Mada even attempts to go on a repulsive diatribe and it falls flat, fails to restore his defenses, and just ends up making him look ridiculous.  As a result, Mada's dignity is utterly demolished, eradicated, and any real sense of agency or control, any capacity for free choice and self-empowerment, has been entirely nullified and stays nullified for quite some time.

What really bothers me is how his guy friends all mentally and emotionally just sort of check out when this happens.  They don't try to rescue him at all.  Frankly, they should all drag him off someplace away from Saki and Keiko.  They should take him to a baseball game, movie, or maybe even an izakaya where they can get him drunk and talk about anime and manga--anything to get the poor guy's mind off of the fact that he's been both humiliated and heartbroken.

This has set up a situation in which others can exercise choice and empowerment at Mada's expense.  This dynamic seems to have been utterly missed by every commentator and blogger I've read.  Mada is utterly and completely objectified by everyone around him (with, perhaps, the exception of Sue, which I'll address further below).

Love Among the Ruins of Mada's Dignity
With everything above considered, it should come as a sudden shock, both to reader and to Mada himself as a character, that there are a number of females (and one very confused and confusing male) who are crushing on Mada.  At face value, none of them are good choices for him.  Let's run through the list briefly. 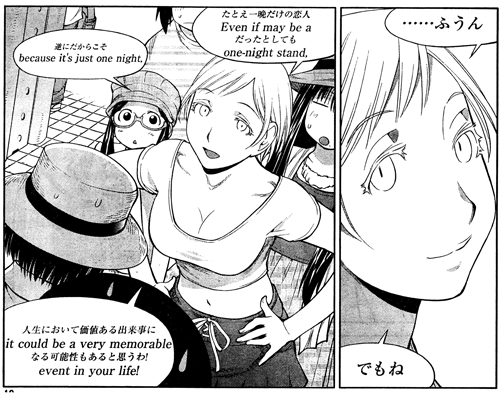 Angela Burton:  The blonde bombshell.  Well-endowed, exquisitely beautiful, the pinnacle of physical perfection.  Korean men speak of having a "white horse" at least once in their lives and if there is a Japanese equivalent, then Angela is the Platonic ideal of the "white horse."  She's ferociously attracted to Mada in a very predatory manner.  The phrase "virgin-breaker" comes to mind--the fantasy "first-time" for a young guy who has no sexual experience.  She's American (and so, stereotypically "slutty"--perhaps American girls have a reputation in Japan for being "easy" or something).  She doesn't speak Japanese but seems to understand it well enough.  She's also a complete bull in a china shop when it comes to Japanese social dynamics.  She has no concept of wa--harmony--and barrels her way through social situations that rocks the boat so hard as to nearly capsize it.

While on the surface, Angela seems like the ideal rebound for Mada.  She's in Japan once every six months.  That nixes any chance of a real relationship.  If she wasn't so utterly carnal and sexual (i.e. "stereotyped" and "objectified") she might be a decent match for Mada.  As it stands, she's only around for a few brief issues and therefore never developed past being a stereotype or an object.  As she is, she'd actually leave Mada far more emotionally damaged and romantically broken than he already is.  To her, Mada is a conquest.  If there was any evidence that she actually loved and cared for Mada, an encounter between the two may have massive healing potential for his character.  However, there's no evidence that she, herself presented as an object/plot device/stereotype, views Madarame as anything more than an object in return.  To be treated in such a manner by her would actually do more harm than good. 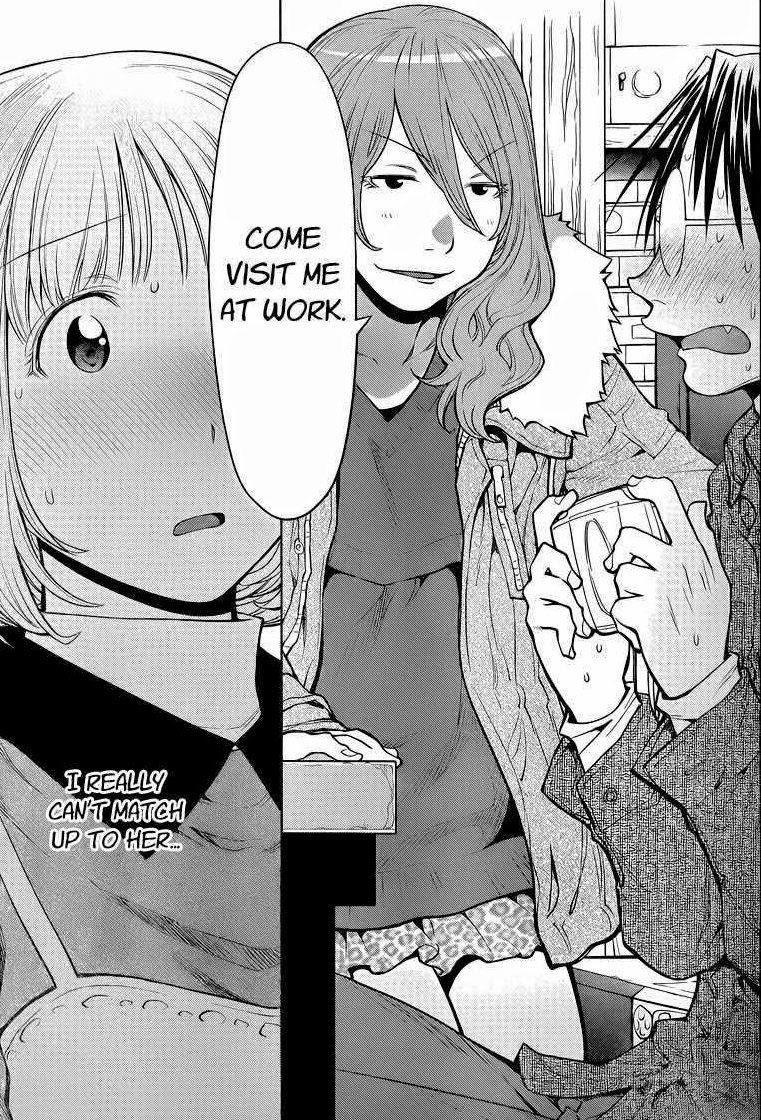 Sasahara Keiko:  Keiko sees Mada as a challenge much as Angela does.  Humorously, the two of them become heated rivals for "who gets Mada" and both are roundly defeated by Sue (who saves both the day and Mada's sanity).  Whereas Angela is sexually aggressive, gazing hungrily upon the hapless Mada like a female mantis, Keiko is flat-out abusive.  She purposely gets his name wrong, calling him "Wantanabe," conveying the very poignant insult that he isn't even worth her learning his name.  Keiko has no respect for Mada and did much to not only orchestrate his "confession" to Saki but also to spearhead his humiliation and the stripping of the remaining shreds of his dignity in the aftermath.  Any relationship with Keiko would be abusive and further damaging to Madarame.

This leaves Hato and Sue.


Continued in Part Two.
Posted by Dave Cesarano at 2:53 PM