THIS IS AN ANALYSIS OF A WORK OF FICTION.  IT IS NOT ABOUT ACTUAL, FACTUAL, REAL-LIFE GENDER DYNAMICS.  If you disagree with my observations and analysis, please keep that in mind and don't make assumptions about my actual thoughts/ideas on actual, real-life gender relations. 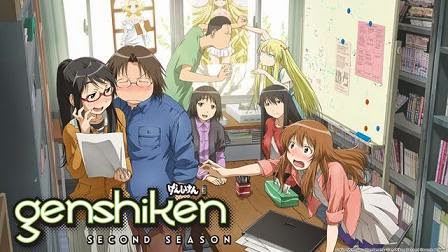 I've always enjoyed reading Genshiken from its inception.  Currently, I'm reading the sequel, Genshiken Niidaime and I've watched as the years have turned and the club has changed as the "old guard" graduated and moved on (or tried feebly to move on) and a new "generation" of students has taken over the club and dominated it.  This post is primarily in response to a number of posts made on Hearts of Furious Fancies regarding Genshiken Nidaime in specific but for the uninitiated reader, I will give a bit more of an introduction to my thoughts, which I'm airing out here to help me organize them a bit.  After all, that's what this blog is really for--its my own personal soapbox from which I can think aloud and help organize my own throughts and ideas as well as keep myself somewhat sharp in an environment that can easily result in myself growing duller.

Genshiken is a Japanese manga about an university otaku club--basically geeks and dorks who are on the fringes of Japanese society.  The otaku boom/Akihabara boom last decade and the success of such stories as Densha Otoko brought a degree of sympathy for otaku and their corollaries (such as the hikkikomori, cf. Welcome to the NHK, for example).  The boom did not result in the superlative mainstreaming of this fringe element the way that the success of "fringe-demographic" films, such as the Avengers and related Marvel films, the Star Trek reboots, the Game of Thrones HBO series, The Lord of the Rings/The Hobbit films, etc., mainstreamed American "geekdom."  The otaku was, is, and will always be on the fringe of Japanese society and the otaku hobbies must always be buried and hidden with shame from the steely gaze of Japanese culture, a culture which perceives strength in uniformity in ways American society does not.

The author and artist, Kio Shimoku, created Genshiken around 2002 and it ran in Afternoon until 2006--right smack dab in the middle of the otaku boom.  Through the manga, he explored the dynamics of otaku interrelations, friendship, and even romance.  His characters are all rather flawed and very much human.  The original run ended with the characters graduating from college and (hopefully) getting jobs at the end of their final year of college.  Genshiken Nidaime takes place after the old characters have graduated and the new circle is predominately female.  Whereas the first iteration of the comic had to deal with females invading a male-dominated space and disrupting the safety and security of that space with their femininity, their sexuality, and their own tastes in the erotic (which brought interesting levels of tension to the comic), the new generation is centered on a club that is now a female space, is female-safe and female-friendly, and the only male that actually fits into the group comfortably and contribute constructively only does so when dressed and acting as though he were a female.

There is a great deal of detail that I am leaving on the cutting room floor and this blogpost isn't entirely for the uninitiated.  I'm going to be throwing names out there so it may be useful to the reader to at least have read the wikipedia entries and maybe Genshiken Nidaime itself, if not the original Genshiken in order to be up to speed.

With this caveat and preamble, I'm going to dive into a sort of dialogue with Hearts of Furious Fancies spurred by this post on one of the main male characters' romantic attraction to heroic females.  Other posts have also given me a great deal of food for thought and after a few discussions with friends who understand Japanese culture far better than I, I've just gotta put my ideas down in print to see where things go.  So, let's jump right in with both feet, shall we?

Continued in the Part One.
Posted by Dave Cesarano at 7:50 AM

Dave, you know, one thing you could really do would be to break a post like this into six parts or more, with one part for each thematic point, making it possible to comment on each theme separately. I just can't write and write today doing that, so I'm going to keep it to two points.

Quote: "And he's met by all of his supposed friends and... . I found the reaction absolutely repulsive. Again, maybe it is because I'm an American and not Japanese but Sasahara's sister does her utmost to utterly humiliate him. She cheers that he got his heart broken. No one stops her, no one says anything about it and his male friends don't come to his rescue in any way."

I don't really follow manga, so I've got to keep my points to what I can relate to.

IF you found four students, say one girl and three boys, living harmoniously in a very open ménage a quatre, which came to your attention but seemed to miss everyone else's, including other teachers and parents, what steps would you take . . . recognizing that in North American culture there are consequences for not reporting such things.

The kids know this; that is part of why they adore manga . . . because it ISN'T North American culture.

Actually, Teacher, the bigger question is, how do some people maintain geographical cultural norms in a world that is being blown apart by globalization? And where do we, as adults, have a responsibility to recognize that the tide will not be stemmed, but must be instead admitted and therefore incorporated into the educational framework?

Anyway, break them posts up, Dave. I think you'd get a lot more comments. People feel overwhelmed. I mean, where do you start?

Dave, you know, one thing you could really do would be to break a post like this into six parts or more, with one part for each thematic point, making it possible to comment on each theme separately.

You're positively correct. I blasted this out in the course of an afternoon so I never really thought about how huge it is. I'll do so.

You make the argument yourself for why his friends behave this way. Being shot down is BETTER than his fantasy going on.

You're absolutely right about why he needed to get his heart broken. However, I don't think I was clear enough about the reactions of everyone else. Saki announced that Mada's heart was broken, Keiko laughed and cheered and everyone else just... I dunno. The girls were total spectators which really is humiliating. What makes matters worse is that his pals didn't drag him outta there and take him to an izakaya to get drunk and get his mind off of it by discussing Kujibiki Unbalance or some other anime, take him to see the Yakult Swallows play the Hanshin Tigers, or see the new Godzilla flick. Anything to help him 1) get his mind off of it for a while and 2) help him recharge his batteries and remind him that he has a support network around him.

IF you found four students, say one girl and three boys, living harmoniously in a very open ménage a quatre, which came to your attention but seemed to miss everyone else's, including other teachers and parents, what steps would you take . . . recognizing that in North American culture there are consequences for not reporting such things.

Do you mean underage students? I'd run it past a couple of my fellow foreign and native teachers (assuming I'm in Japan or something) and see what the appropriate action to take would be. Different cultures approach these things differently. I really can't impose my own morality on a culture that has a different moral metric.

Actually, Teacher, the bigger question is, how do some people maintain geographical cultural norms in a world that is being blown apart by globalization?

Globalization is overrated and not really working out, I think. Part of this is because I'm rereading John Ralston Saul's The Collapse of Globalism. Great book, I highly recommend it.

And where do we, as adults, have a responsibility to recognize that the tide will not be stemmed, but must be instead admitted and therefore incorporated into the educational framework?

... Eeeehhhhhh... This is a really hard thing to consider and maybe I should write an entire post about it later.