Let's begin an analysis of Super Dimension Fortress Macross in earnest, beginning with a broad overview of the plot. 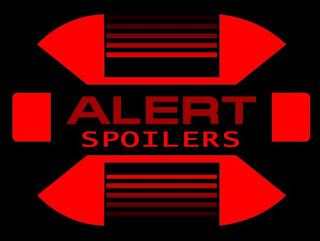 PLOT OVERVIEW
The series opens with the crash-landing of an alien warship on South Ataria Island in a remote part of the western Pacific Ocean.  Earth is in the midst of a world war but the appearance f this alien vessel quickly unites mankind under the auspices of a powerful United Nations, which forms the U.N. Spacy.  Over ten years, the ship is rebuilt and remodeled, its technologies reverse-engineered, and is christened the Macross.  To support the massive undertaking of repairing and examining the ship and its technologies (including a spacefolding FTL drive), an enormous city springs into existence surrounding the vessel and occupying most of the island.

The story begins in earnest with the celebrations to launch the vessel.  It is here that we are introduced to most of the characters that will dominate the narrative.  Captain Bruno J. Global, an Italian submarine captain who had fought for the United Nations during the unification wars and whose appearance exemplifies the "Mustache Pete" stereotype.  His first officer is First Lieutenant Hayase Misa, a Japanese woman whose father, Admiral Hayase Takashi, was Global's superior during the wars.  Her coworker, companion and close confidante is Claudia LaSalle, an African American bridge officer.  The leader of the Skull Squadron, Roy Focker, is a heavily drinking, smoking, womanizing, American cowboy who started out as a stunt pilot before joining the United Nations forces during the U.N. Wars.  He is in a romantic relationship with LaSalle and hosts his young friend Ichijyo Hikaru, the son of the air circus owner for whom Roy flew before the wars.  Ichijyo Hikaru is introduced as an energetic, brash Japanese pilot of age 16 with a record of seven championship awards for stunt piloting.  Finally, Lynn Minmay is a 15-year-old, half-Chinese, half-Japanese girl from Yokohama who moved to South Ataria Island with dreams of becoming a star.

The celebrations and launch preparations are interrupted by the arrival of the Zentraedi, an alien race of giants who are searching for the crashed vessel since it is identified as belonging to the Supervision Army, an enemy force with whom the Zentraedi are at war.  Their commander, Britai Kridanik, orders an assault to capture the vessel, brushing aside all orbital defense platforms encircling the earth and bombarding the island before launching ground and air attacks.  Hikaru and Minmay are immediately swept up into the events and find themselves, along with many of the survivors, as refugees aboard the Macross when a space-fold operation goes wrong.  The Macross, with its precious cargo of civilian refugees, then battles its way across the solar system back to Earth.  Once it arrives, the crew and refugees alike must navigate the complexities of government policy and military command that wants to mitigate the impact of the alien attacks on Earth and use the vessel to distract the Zentraedi away from the home planet.

Throughout the story, interpersonal drama unfolds in the form of a love triangle between Hikaru, Minmay, and Misa.  Hikaru is initially attracted to Minmay who, although she finds herself drawn to Hikaru, is ultimately career driven and extremely capricious due to her youth.  However, the 19-year-old Misa and 16-year-old Hikaru, despite the intense dislike the two have for one-another, gradually find solace in companionship.  As the series progresses, years pass and they grow older and more experienced and mature.  As they age, Hikaru gradually detaches himself from Minmay and finds in Misa a more sophisticated and meaningful relationship.

THEMATIC DEPTH
What sets Macross apart from other "real robot" anime?  Mobile Suit Gundam arguably has a sophisticated plot full of intrigue and illustrative of the horror of war (especially involving advanced robotic technology and futuristic weaponry).  There are a great deal of similarities between the two, as well.  Hikaru appears to be much like Amro--both are excellent pilots who become leaders.  Both the Macross and the White Base are iconic vessels that serve as major targets for the enemy to capture or destroy.

The similarities are mostly surface.  Macross actually subverts many of the elements that are prominent in Mobile Suit Gundam.  In addition, Macross isn't as unambiguous about war.  Where Mobile Suit Gundam simply depicts war as bad, Macross demonstrates how war can often be unavoidable.  Nevertheless, Macross still tries to provide a positive message by exploring how misunderstanding and lack of communication can create military conflict and give methods by which negotiation can lead to peace.  Mobile Suit Gundam is far more pessimistic in its outlook.

The characters in Macross are multifaceted.  It is difficult not to care about them and find oneself deeply engaged by the narrative.  Actions have consequences.  People live, love and die.  They are beautifully, wonderfully flawed in the most human and believable ways.  Characters have real motivations that go beyond simply winning the war.  Unlike Mobile Suit Gundam, the characters of Macross have lives outside of the conflict.

The war against the Zentraedi is a catalyst for much of the drama but it is by no means a mere situational MacGuffin.  It forces characters to analyze themselves and become more introspective.  It provides a vehicle for experience.  They change, grow, and develop as people.  Kawamori Shoji invested a great deal of time and effort into creating these characters, their needs, desires, hopes, and motivations.

The narrative of the series is also challenging to the viewer.  There is no clear-cut good-guy/bad-guy dynamic.  Kawamori refuses to spoon-feed the viewer with a morality.  Instead, he uses the themes to make the viewer think.  One may not agree with the choices certain characters make.  They mess up, fail, fall down and occasionally some don't climb back up.  There is heroism and sacrifice, tragedy, foolishness and tunnel vision, blind ignorance, love, appreciation for beauty, loss, and triumph. 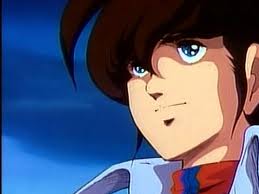 THE HERO
Ichijyo Hikaru is the hero of the tale.  He starts out as a kid.  Although he is an experienced air-show pilot he is unready to deal with the realities of air-combat and warfare.  Nor is he prepared to pilot a transforming mech.  He stands out as a protagonist because he, like us, is thrown into this conflict.  The viewer can identify with him very quickly.  He's not "the One," a Newtype, or the Kwizatz Haderach.  He's just a kid who gets swept up by events far beyond his control.  Hikaru is forced to adapt and grow in order to survive.  His journey becomes our journey through the series and we experience the story, the love, the loss, and the lessons vicariously through him.

He stands in direct contrast to Amro in Mobile Suit Gundam.  Amro is a Newtype, a sort of psychic whiz-kid at piloting robots.  Amro's alter-ego is Char Aznable and the two engaged in one of the most legendary feuds in all of anime.  Enraged at the destruction the Zeon forces are wreaking, he jumps into the cockpit of a Gundam, barely glances at the instructions and immediately starts piloting in a combat situation.  He is entirely untrained and untested, yet he successfully defeats the enemy Zacks.

Hikaru's first experience is quite the opposite.  In fact, it's terrifying.  Hikaru is absolutely overwhelmed.  He ended up piloting a Valkyrie fighter entirely by accident and ends up escorted to safety by his mentor, Roy Focker.  Even this escort barely rescues him and he is instructed to transform in order to avoid colliding with the Macross.  He may have the skills and training to fly a plane but he is entirely incapable of piloting a bipedal robot, crashing into buildings and causing a lot of damage.

Amro is special by having an innate talent.  Hikaru isn't special.  He's entirely mundane.  He's a human.  The fact that he becomes an ace fighter pilot is not through virtue of being a Newtype like Amro but a result of hard work, training, courage, and willpower.

Next time, we'll take a look at the circumstances of war and its impact on Macross as a major theme.

Posted by Dave Cesarano at 6:31 AM