Sexual Dynamics:  Hato
Hato Kenjiro is confused.  Supremely.  Other bloggers have commented that homosexuality and transsexualism do not manifest as they do with Hato--not even when a person is "in the closet."  Hato, in my opinion, has no idea who he is or what he wants.  Indeed, he's extremely troubled and not at all attached with reality.

I don't even know where to begin with Hato.  Perhaps with the fact that he began to cross-dress as a girl and draw BL comics out of his infatuation with his upperclasswoman/elder brother's girlfriend (now fiancee), Kaminaga.  Hato seems to need a senpai upon whom he can fascinate.  The problem is, he's not really being himself.  Indeed, I, as a reader, don't know who Hato is.  He's cloaked in so many personas within himself, constantly struggling to figure out which one he is that it is ridiculous.

As Hearts of Furious Fancies notes, Hato doesn't wish he was born a girl.  He appears to be a female trapped in a male body, but none of the typical internal dialogue about being so is presented to the viewer.  Hato is in conflict but the whole why is really obscured and obfuscated.  We get a lot of factors involved in his conflict but the nature of it is one of self-denial on some level.  Hato wants to embrace his female side but that female side evolved as a sort of redirected infatuation with Kaminaga.  This woman invaded Hato because he couldn't express his feelings for her--she was his brother's girlfriend!  So, instead of just carrying a torch along like Madarame, Hato created her clone within his own psyche.  Hato tried to become her.

Down this path has led madness.  Hato is a hot mess.  He doesn't want to be a woman because he was "born that way," Hato made himself that way.  It is a coping mechanism gone all wrong.  Hato's been conquered by a Kaminaga clone he created.  The poor guy is an emotional train-wreck waiting to happen.  He's got far, far too much baggage he needs to sort out before he is even remotely ready for a relationship.

Hato cannot even draw unless he's dressed as a woman.  This is not a symptom of a well person.  It hints at schizophrenia, multiple personality disorder, you name it.  Perhaps I'm bringing far too sober and serious an eye to this entire thing but there is a powerful subtext of dysfunction that has surrounded Genshiken from its very beginning.  In the first generation, it felt very supportive and accepting.  Ironically, Hato gains acceptance but it is as a female.  The moment Hato attempts to accept his male self and stop cross-dressing, the entire dynamic of the club changes.  The female-dominated space feels slightly perturbed.  The female characters react to this with varying levels of acceptance to silent disagreement but no one really actually supports Hato's choice... except Madarame.

Why?  Because Madarame got what he actually needed, something he's been missing since Sasahara graduated and went off to work.  Madarame got a friend, a male companion... a bro.

Mada Needs a Guy Friend
Although it crushed Hato on some level, the fact that Mada had found a guy friend with whom he could relate had been a huge boon to him.  Mada has, throughout Genshiken Nidaime, been shedding the layers of belligerent, geeky otaku-ness for a more mature definition of self.  It appears that he's been growing a degree of self-confidence, baby-step by baby-step.  Interestingly enough, despite the stripping of his dignity after Saki breaks his heart and douses his torch for her, Mada seems to still be building himself up as a mature adult.  He's still confused and trying to find his niche in the world but he's doing it somewhat calmly and in a relaxed, laid-back manner in contrast to his former self.

Mada's maturity is accompanied by his loneliness.  His old friends are scattered, living their own lives, busy with their own attempts at finding jobs, livelihoods, and enter the adult, Japanese, workaday lifestyle.  His closest friend was ostensibly Sasahara Kanji, who rarely ever pops up in the manga anymore.  Through his arrangement with Hato (who gets changed at his apartment), Mada has actually gotten to know Hato as a guy and not as a cross-dresser.  Mada has found a companion in male Hato.  The thing is, male Hato and female Hato are different people outwardly (although inwardly they're conflicting poles of the same persona).  Mada can deal with male Hato as a male friend--something he desperately needs.  Female Hato only confuses Mada more at first.  Gradually, Mada comes to accept both as two sides of a coin but he feels far more comfortable and safe with male Hato.

Female Hato has finally announced his affection for Mada, exacerbating the harem situation in which Mada finds himself.  (Use of pronouns here is getting... sketchy... so I'm going to use pronouns based on biology).  The thing is, Mada is straight and Hato is trying to validate his own confused needs and desires by latching onto Mada and making him the object of his infatuation and a replacement for his former senpai.  This is not only unfair to Mada, it robs him of what he really needed--a male non-romantic, non-erotic, entirely non-sexual friendship.  Comrades.  Pals.  Bros.

What Mada Doesn't Need
Mada doesn't need to be a replacement for Hato's former senpai.  He needs to be Mada.  He doesn't need to be Hato's uke or seme either.  He needs to be Mada.  Mada is a straight cis-gendered male.  (I swear to God, I'm going to burn my Genshiken tankobon if Shimoku is so gauche to magically turn Mada gay for Hato.  I think Shimoku is better than that--so far he's lampshaded most of these manga tropes and the whole, "I'm not gay I just love you" guy-on-guy romantic arc is a definite fujoshi-manga trope.  Nevertheless, I've been disappointed by cheesy dei ex machinae before and that one would just infuriate me because it wouldn't be true to Mada's character.) 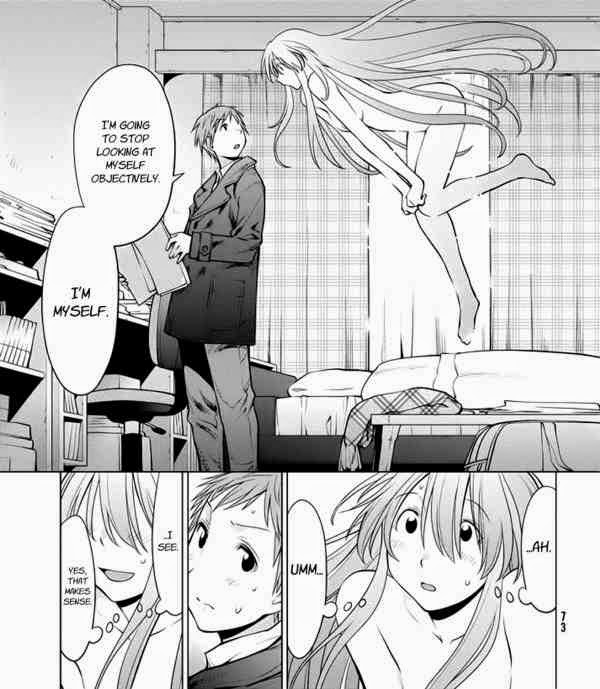 Hato Doesn't Know Who He (or She) Is
Hato can't really get true, honest support because Hato isn't ever honest with himself.  Hato hasn't really come to grips that his female persona is entirely fabricated as a coping mechanism.  He may have admitted it but he hasn't really done anything about it.

No, strike that, he has.  He rejects it, stops cross-dressing, tries to accept that he's a straight male who likes BL and still tries to hang out with all the girls.  He tries.  He gets and A for effort.  Then Mada tells him how happy he is that he has a male friend again.

POW!  Hato is crushed.  Kuchiki tries to "go gay" with Mada for Hato but that guy is such a clown that all it does is make everyone look and feel ridiculous.  In the end, Hato throws in the towel and starts to gradually merge himself with his Kaminaga-clone self and start seriously and deliberately indulging in--and exacerbating--his crush on Madarame.  The sexual tension continues to ratchet up and Mada is caught in the middle.  In the end, Madarame has lost a friend and gained a harem member.  Mada cannot entirely be himself anymore because of this.

What has me tearing my hair out is... why?  Why has Hato fixated on Madarame?  Is it because he is desperately trying to manifest himself in one of his BL fantasies?  Is it because he actually is gay and in love with Madarame?  There is the constant reminder through the manga that reality and fantasy are not the same but that doesn't seem to be stopping Hato from trying to create some sort of romantic relationship with Madarame.  And all this seems to belie the fact that Hato is not a transsexual.  He is comfortable with his male anatomy even though he's emerging as a female persona.

Or is Hato a personification of Genshiken as a whole?  If that is so, then Shimoku is saying something really twisted about what happens when male spaces convert to female spaces.

Continued in Part Three
Posted by Dave Cesarano at 3:00 PM