Once Upon a Time on Athas... 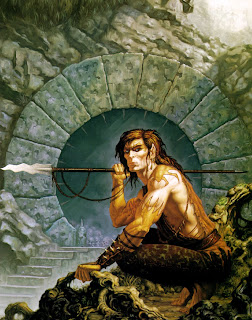 One of my favorite campaign settings is Dark Sun, a post-apocalyptic world scorched by life-draining magic. It's an inherently pessimistic and nihilistic setting, bereft of gods (clerics get their power through worship of elemental spirits in a sort of animism), and filled with tyrannical sorcerer-kings.

I remember a time back in college when I was running my campaign. It was a lot of fun playing with my core group of three players--John (who later went to get his PhD at Dartmouth) was a dwarven gladiator, Luke (a gigantic guy who looked like a Mafia enforcer) was a half-elven preserver-bard, and Aaron (my best friend and one-time roommate) was a half-elven defiler/psionicist. There were other party members who came and went--we had Marc who played a cleric of the air spirits, some guy who played a halfling ranger (I can't remember his name, it was over ten years ago), and Wayne who played a templar from a hidden city to the distant north. But our core group was Aaron, Luke, and John, who were there for every adventure, had beautifully well-developed characters, and displayed incredible camaraderie.

Aaron's character had a curious backstory. He never knew his father, but knew only that he had been cursed. His elven mother was always ashamed of him, and eventually he abandoned his elven tribe and struck out alone. Tattooed to his arm in ancient elvish was the phrase "...and all that you touch shall become ashes." This curse was the cause of his defiling magic. We worked out a system where he could cast as a preserver (i.e. he didn't suck energy from the life-force of the land about him), but it would take intense concentration and cause his character great pain and his tattoo would glow. He wrapped it in bandages to hide it from others and studied the ways of the mind and psychic powers in order to help him control his magical abilities.

Luke's character, being a preserver (a magic-user that only draws a little life-force so as to not turn the land around him into ash and desolation) was diametrically opposed to defilers. His alignment, Chaotic-Good, would theoretically put him at odds with Aaron's character, who was Neutral-Evil (if I remember correctly). Now, Aaron is a great study in how to play an evil character that doesn't have to betray the party. His evil was totally a function of priority--looking out for himself--but he gradually extended his priority to include his friends. When John and Luke proved themselves as trustworthy, Aaron's character did what he could to protect them. At first, this was a function of practicality--their survival increased his own chances of survival.

Then, one day, while escaping from pursuit, Aaron failed his check while casting a spell. Instead of absorbing the pain of casting, a swath of land around him turned into black desolation. John and Luke were shocked, both in character and in real life (Aaron had kept it a secret all this time), but they had no time to discuss it until later.

When they did, Aaron sat his two comrades down and explained all that had happened in his past. It was incredible. I just sat back while he and Luke, totally in character, discussed his curse, how much he tried to subvert it and overcome it, how he somehow hoped but didn't believe in redemption. And Luke accepted him. Aaron agreed to avoid defiling as best as he could--basically continuing to cast spells with checks as he'd always done. Despite their opposing classes and alignments, through role-playing in character, the two became friends and came to trust one-another deeply.

Oh, there were still disputes that were caused by alignment. One time, after interrogating an enemy soldier, they debated whether or not to let him go. They only had enough water for the three of them, not the captive. Releasing him would result in the captive either dying in the desert or finding his unit and informing them of the location of the party's forces. Luke felt it was honorable to release him. Suddenly, Aaron's character drew his obsidian dagger and slit the captive's throat. His reasons were sound--either he dies or informs the enemy, period. Aaron, true to his evil alignment, killed the man in cold blood and did not feel any remorse.

However, Aaron and Luke both felled a 12th-level psionicist using stealth, smarts, and skill in perfect co-ordination. And they were only at 4th or 5th level (this is in 2nd edition AD&D, by-the-way). They worked together as a team--in fact, the three comrades worked so well together that they were almost like a commando group. I had difficulty with lots of encounters with them because they were so well coordinated. Other people would rotate in-and-out of the game, but this core had gotten to know one-another so well every Tuesday night over the course of junior year of college that they really challenged me as a DM to set up encounters that would make them sweat--but I did it. And honestly, it felt good to see them triumph over the challenges I set before them.

Alas, Luke flunked out of college and disappeared, John graduated and went to Dartmouth, and Aaron and I were left alone our senior year of college. The group was never the same without John and Luke. I ran a few sessions during my senior year, but it didn't last very long. I tried converting things to 3rd edition, but the dynamics of the group were just too different. The magic was gone.

Instead, I returned to playing, and had some memorable adventures in Aaron's second Forgotten Realms campaign. But I'll never forget those times junior year, playing Dark Sun. It really shaped my opinion, thoughts, and feelings regarding good roleplaying. The four of us were pretty good friends out of game, and that friendship was greatly enhanced by our interaction in-game. 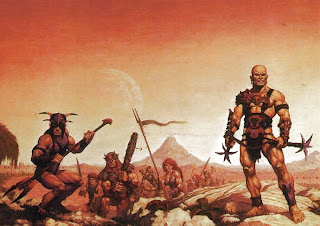 Posted by Dave Cesarano at 6:57 PM

Sort of reminds me of the relationship I had with my original crew of my two best friends and my brother. Because we all got along and knew each other well in real life, our gaming synched and just felt right.

I've had a lot of great gaming in the years since then, but I've never had a group that gelled quite so well as my first group of friends.

I think college has ruined me for gaming. You're totally right, I've never been able to gel with others so easily as I had been in college. Because we were all so close in real life, we naturally worked together as a team in game. I mean, it was just natural.

The best comparison I can give is how well my brother and I could play Halo together. We knew one-another so instinctively that we operated very well together. That intimacy was there in our college groups. You don't even need to communicate with one-another, you just set yourselves up naturally covering your friends' weaknesses and supplementing their strengths.

Ever since, I've never found a group of people I could trust so intimately in real life. This had an impact on my role-playing. Even here, I don't feel that close a kinship with other players like I did back then. Too often, I've noticed people's different psychological issues really come out in game, and I imagine that my own do as well, and it unsettles me.

But when you are with that intimate group of close friends, whom you trust implicitly, a lot of your reservations drop. There's no need for defense-mechanisms or posturing. Everyone knows everyone else, inside-and-out.

Maybe as we get older, we layer more and more defenses upon ourselves, making it tougher to achieve that level of vulnerability where you abandon yourself to trust and pure friendship. I've found that as I get older, people game more and more selfishly, and that's disturbing.

Believe-it-or-not, D&D, and not sports, taught me that "there is no 'i' in 'team'." I just wish it had taught other people.

Well, the expat experience does tend to lead to fairly shallow relationships. You get to be friends with some people, then within a year some of them are gone, and new ones are popping up.

I hope, assuming I'll be back in the States again sometime in the future, that in time I'll be able to find another good long-term group where that trust can build.