Gaming and History -- The Conspiracy of Catiline 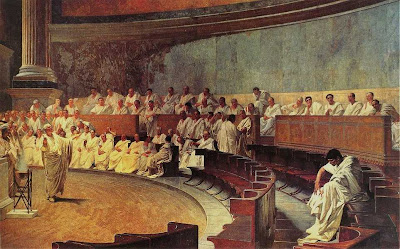 Almost a week ago, Brunomac over at Temple of the Demogorgon posted some of his "alternate time period" ideas for a Call of Cthulhu campaign. Naturally, I was intrigued, because gaming in history is something I've always considered a cool idea I'd never managed to pull off.

I was really inspired

to run some sort of game during the Roman Empire period (probably during the Flavian or Antonine dynasies, approx. AD 70-190), and being something of an amateur know-it-all in the early empire, its economy, politics, and military (I won't be an expert until I finally get a PhD), I've got tons of books with lots and lots of pictures lining shelves in my parents' house back in the States. Pictures are great for helping GMs get across a lot of features that might be difficult to describe, like architecture, coinage, art, jewelry, and clothing.

I like my worlds to feel "lived in" and real. That's one of the reasons I am such a lover of The Forgotten Realms campaign setting. I'm very much about immersion, and there's so much that a player can immerse him/herself in with ancient Rome. I was originally inspired when I read Thomas Harlan's The Shadow of Ararat. The book is actually pretty decent as fantasies go, and Harlan makes decent use of Rome as a setting, especially with Maxian's covert experiments into the nature of the magic that cloaks the city of Rome. I read those sections with great enjoyment, but I also really liked the segments where Thyatis and her cadre of commando troops raided an enemy base, infiltrating it through the cisterns of Constantinople. There was some really exciting stuff there, and it gave me a million ideas about running a game set in Rome. 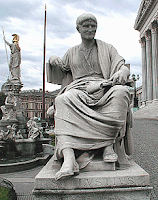 So when I finally got around to reading Sallust's Conspiracy of Catiline, something crystallized inside of my head. I realized that I didn't want to run a game set in the early empire, but during the late Republican period--a time when the republic was decaying, and the costs of empire were eating away at the social fabric of the Roman people.

A conspiracy is a fantastic centerpiece for a campaign, and Republican Rome would be a great and immersive place for players to explore--provided I had the wher ewithal to accurately stat it up and obtain/draw accurate maps. I mean, I know, Hollywood doesn't care all that much for accuracy so why should I? Just get any-old map of Rome and use that. I mean, who is going to know the difference?

Actually, everybody who plays and has a brain. I mean, sooner or later, somebody is going to be walking around the Basilica Ulpia and look up at Trajan's Column and say, "Hey, DM, what's this doing here? If Trajan was an emperor, and we're playing twenty years before Caesar gets killed, then... how the heck is this here? It shouldn't have been built yet!" 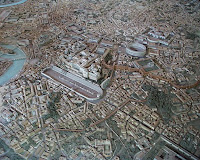 Indeed. That's kind of like running a game set in America in 1812 and have characters talking on the steps of the Lincoln Memorial in Washington, D.C. Its anachronistic. Now, some anachronism is going to slip in anyway, it's unavoidable. But with some research you can cut down on it. Books from the Osprey m ilitary history series, complete with illustrations, can help with a lot of accuracy issues, as can Peter Connolly's The Ancient City for architecture and maps. Players may need some prepping, too. The Flavian Amphitheater (aka. the Colosseum) hasn't been built yet, so gladiatorial games are much more small-scale. There aren't any emperors yet. Caesar's invasion of Gaul hasn't happened yet. The state has finally recovered from Sulla's abuses, purges, and death. There will be a few things the players will have to adjust to not seeing, because they're so used to them from movies and TV. 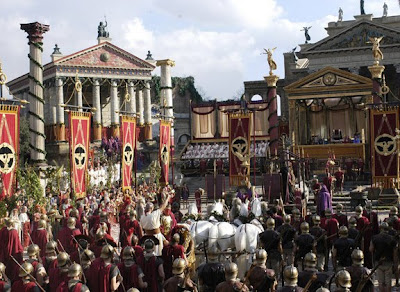 But these aren't arguments against the game, but just little things that I'd have to take into account if I was prepping such a campaign. The real challenge would be the players adapting to the setting through their behaviors. When in Rome, do as the Roman s, especially in character. Venerate your ancestors, be patriotic (even if it means you have to kill your sisters), sacrifice to the gods, and take omens and curses very seriously. It shouldn't be too difficult, but I've run into many a player who doesn't feel like reading a single iota of setting material and just wing it. These players are the ones who would often end up asking questions like "what's a lares?," chase and/or kill one of the Capitoline geese, and try to kiss one of the Vestal Virgins. (HINT: That last one is something you seriously, seriously, seriously don't want to do). As a GM, I hate having to pause the action in the middle of a game and deliver an infodump. It slows things down, and for some gamers, that's enough for my game to descend into absolute boredom for them (gr anted, they usually don't care much for descriptions of buildings, pictures of Gallic warriors, or types of coinage, and they usually don't stick around in my games for long either). If it is something your character should know, then I'd like you to know it. Granted, when we're talking about ancient Rome, there's a lot there to know and it is honestly not worth the effort to compile a 250-page book of Roman culture and society so the player can immerse himself and effectively role-play. That's just absurd, and it's a great way to alienate players. 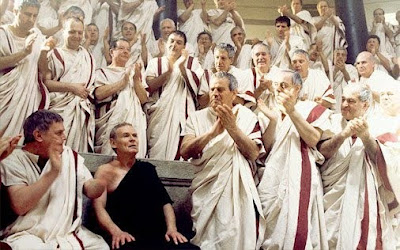 But I digress--why does playing in the time-period of the Catiline Conspiracy intrigue and excite me? Simple--it's tailor-made for a great campaign. The existence of a conspiracy in ancient Rome is a simple plot idea that's a lot of historical weight. Intrigue, cunning, assassinations, and double-crossing can make this an interesting game. It also gives characters the opportunity to change history. What happens if, instead of stopping Catiline, they try to help him succeed? What happens to Roman history then? The characters can participate in elections, campaign for offices, get involved in the seedy criminal underworld, and establish a relationship with one of Rome's powerful patrician families as clients--or perhaps become novi homines themselves. The political nature of the game can lead them on paths to greatness in the seats of government or in the military. There's no reason the game has to be stuck in the Eternal City, either, but can range far and wide, into Gaul, Egypt, the ruins of Carthage (where the ghosts of dead gods and angry generals may lurk) or even the far-off Partian Empire. Riots can erupt as the plebian masses revolt against the abuses of a corrupt Senate. Players can visit a thermopylaeum and buy some cheap fish stew for lunch, or make a fortune by mastering how to make garum, or even ship new works of incredible technology over from Greece. 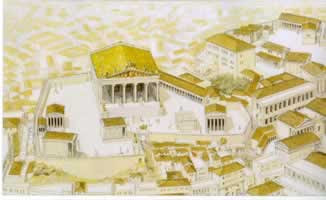 But the conspiracy itself is rife with opportunity for fantasy/horror elements to creep into the game, darkening Rome's streets and alleyways. The Romans believed in magic and curses, so there will be ample opportunity for spells and dark pacts. The sewers are large and mysterious, a perfect place for dungeon crawls in pursuit of shadowy deals, thieves, buried secrets, hidden entrances to buildings, or forgotten tombs and buildings covered by time. A huge necropolis exists outside the city, and it would be intriguing to investigate someplace like the Tomb of the Scipios for evidence of necromancy. There's just so much opportunity for adventure. I can see Roman conspirators in the shadows of a ruined villa outside of the city, making pacts with dark gods and elder things that would be better left sleeping beneath the seas or drifting between the stars.

An obvious question to ask, however, is: "What system should I use?" Well, right-off-the-bat, I'd have to nix Dungeons & Dragons almost entirely, unless it's been heavily, heavily house-ruled. Old-school style leaves the magic-using characters far too weak for my tastes, especially since I'd want to throw a lot of stuff at them to do. I mean, one spell per day is not really enough, and given the entire treasure + defeating monsters = experience system that it employs for XP, the rate of advancement would be too slow, especially since the game would focus more on role-playing and interaction with the environment. I'd consider 2nd Edition, if it weren't for the fact that 3.0 and 3.5 just streamlined so much. But 3rd Edition and Pathfinder make the classes far too powerful, what with all the different kinds of abilities the different classes get. Rome should be magic-light. In addition, the massive glut of feats, items, powers, spells, and whatnot is absolutely overwhelming--far too overwhelming for a game set in ancient Rome. 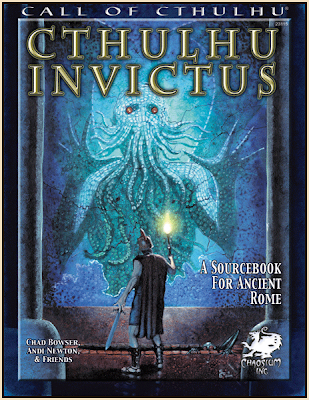 Chaosium's Call of Cthulhu might be a good choice, and I've considered Cthulhu Invictus. White Wolf's World of Darkness system doesn't really do enough for mortal characters, and I dislike how they've changed the system in the past decade. GURPS could be a good system, though I don't have GURPS: Rome. But, believe-it-or-not, I'm leaning most heavily toward the D20 Conan: The Roleplaying Game or The Riddle of Steel. They're both very gritty, brutal, with magic that fits the feel of what I'm after far better than Dungeons & Dragons, Palladium, or White Wolf.

By-the-way, Sallust's house was preserved in Pompeii when Vesuvius' eruption buried it. Check it out below. 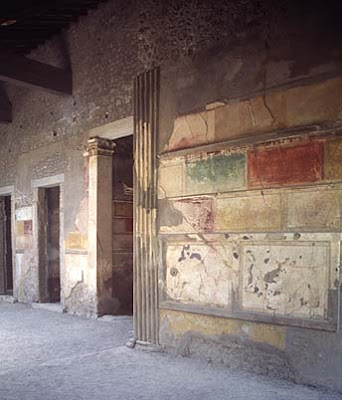 Posted by Dave Cesarano at 1:21 PM

might be good, too. This is the free version, there's a cleaned up version you can buy for $10 if you want (haven't seen that one).