Book Review -- THE GUNS OF AVALON by Roger Zelazny 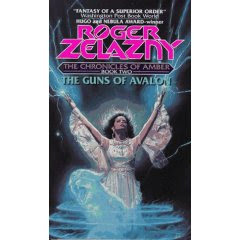 Several months ago, I slammed through this short book and intended to write a review on it, but never did get around to it. Zelazny's first volume, Nine Princes in Amber, I have already reviewed here. It's a pretty short novel, running only about 223 pages in length, so it's pretty typical of a mid-20th century fantasy/science-fiction novel in that regard.

If you've read my comments on Nine Princes of Amber, then you'll know what to expect here. Zelazny mixes a lot of literary styles, but seems to focus primarily on the fantasy aspect of the series in this novel. Corwin, our protagonist, still talks like a hardboiled detective at times, and at others like a knight from an Arthurian romance (occasionally in the same sentence), but as I stated in my other review, this is just a feature of Zelazny's setting, not an anachronism. His prose isn't fantastic, though he occasionally shines in certain places. He writes with the fast-paced rhythm of the pulpy adventure that dominated so much of the 20th century. His descriptions are sparse, almost anti-Tolkienesque in flavor, leaving much to the imagination of the reader. He focuses more on describing fencing technique and combat, or clothing and accessories, than he does location or setting.

As for the story itself, it picks up shortly after Nine Princes of Amber ended. When we last left Corwin, he had vowed to claim his brother's throne and see guns brought to Amber--a place where gunpowder does not ignite. But Corwin has a plan, and the bulk of this book focuses on how he carries this plan to fruition.

If that were all, the book would be hum-drum, but Zelazny set up a wrinkle at the end of Nine Princes when it appeared that a new road to Amber had opened up through Shadow--one related directly to Corwin's curse that Eric's reign would not be easy or peaceful. Throughout the book, Corwin must confront the consequences of his curse, which appear to escalate in intensity to the point of nearly causing him and his brother Benedict to fight to the death. The full impact of his short-sightedness and selfish behavior do not make themselves fully clear until the very ending, when Corwin faces something that could potentially destroy Amber and bring Chaos to the entire multiverse that Amber governs.

something of a scoundrel, an ultimately selfish and narcissistic character, but then again, so are all of his siblings. He is very typical of the 1960s-70s fantasy anti-hero, cut from a similar cloth as Moorcock's Elric. However, Zelazny is not about to let him get away with it, and Guns of Avalon is about reaping what one has sown. Throughout the novel, Corwin travels through lands and encounters people where his past threatens to catch up with him, and his current deeds will bring consequences before the novel ends. Despite all of the challenges he face, the greatest threat to Corwin isn't from the darkness that cuts through Shadow, or from his brothers, but from himself and his own indiscretion.

In the end, Corwin triumphs, but his triumph is hollow and meaningless, because he is inheriting the very curse that he bequeathed upon his brother. Corwin conquers every challenge set before him except those he has set before himself.

This novel is very obviously a bridge. It's setting up the next installments, wherein Corwin will undoubtedly confront his own creations and face the consequences of his actions and his decisions.

But none of this should suggest that Corwin is not a sympathetic character. He's an Amberite--he is stronger, faster, and more intelligent than people who live in Shadow. He has lived for centuries, and in those centuries perfected his combat abilities and his knowledge and skill in military affairs. As a strategist, he is second only to Benedict, his elder brother and former warmaster of Amber. There's good reason for his aloofness and narcissism. During his sojourn on our Earth, Corwin had learned that beings from Shadow were not simply toys or mindless dolls to manipulate, but that we had feelings and were fragile in mind, body, and heart. Corwin had learned this by the beginning of Nine Princes but he hadn't quite gotten over his narcissism, and, indeed, by his treatment of his lovers, one can see that he still has a way to go.

As with Nine Princes, the author's inspiration is eclectic. Zelazny takes us through worlds invoking chivalric romance and Arthurian legend, on chases through strange landscapes, and a brief jaunt to 20th century Earth. Great squadrons of mounted knights charge into monstrous hordes of foul beasts, evil creatures cackle in dark towers, and heroes with shining swords do battle against the forces of chaos. Like most of the pulpy fantasy writers of the 50s, 60s, and 70s, the great enemy isn't simply evil, but is chaotic (this would come to heavily influence Gary Gygax and Dave Arneson in their creation of fantasy role-playing games, such as Dungeons & Dragons). The final chapter features modern riflemen engaging in a decisive battle that could remind readers of Jared Diamond's Guns, Germs, and Steel. The book is, like its predecessor, an exciting journey through imagination--something that pulp writers do best. It's not a work of amazing literary merit, but it is surreal enough to be thoroughly magical. 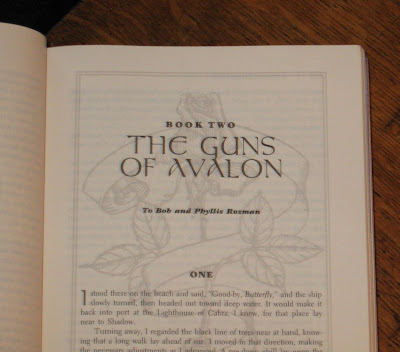 The Guns of Avalon by Roger Zelazny
Style B
Substance B
Overall B
Posted by Dave Cesarano at 4:19 AM