Book Review--LANKHMAR: TALES OF FAFHRD AND THE GREY MOUSER 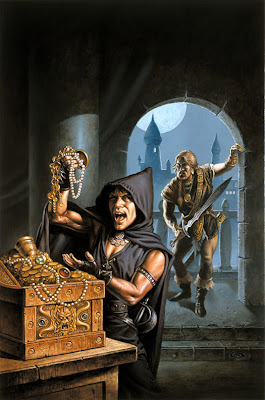 When legendary science-fiction/fantasy author Fritz Leiber first put pen to paper, it was with the intention to create a duo of fantasy adventurers that were far more realistic than many other, similar characters that could be found in the pulps and novels of early 20th century American fiction. Fafhrd and the Gray Mouser were birthed in 1939, with the publication of "Two Sought Adventure" (subsequently retitled as "Jewels in the Forest") in Unknown. In the years immediately prior to the American entry into World War II, Leiber went on to publish two more stories, "The Bleak Shore" (1940) and "The Howling Tower" (1941). During the 1940s, only a few more Fafhrd and Gray Mouser stories saw print, "The Sunken Land" (1942) and the novella Adept's Gambit (1947).

It wasn't until the 1960s and 1970s that Leiber began to prolifically produce stories of Fafhrd and the Gray Mouser. Soon, they became iconic of the post-Tolkien pulp-fiction world of the mid-to-late 20th century. Scoundrels, self-serving, and yet each possessing a heart of gold, Fafhrd and the Gray Mouser adventured across the surface of their world, Nehwon, but were always called back to mysterious Lankhmar, the City of the Black Toga, the City of Sevenscore Thousand Smokes.

When, in 2000, White Wolf Publishing, makers of now-discontinued Vampire: The Masquerade, decided to repackage and republish Leiber's original stories in slightly different collections, it was tied into the upcoming release of Exalted as a sort of inspiration source for their forthcoming product. Indeed, as inspirations go, the tales of Fafhrd and the Gray Mouser provided inspiration to E. Gary Gygax and Dave Arneson in their creation of the fantasy role-playing game Dungeons & Dragons (see my entry on Appendix N). 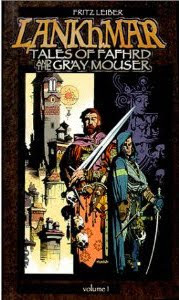 Lankhmar: Tales of Fafhrd and the Gray Mouser by Fritz Leiber
Contained in this volume are only a handful of Leiber's stories. Most were written late in Leiber's career, and as tie-ins to explain the origins of the characters and their purpose for adventuring. Originally collected together in a volume titled Swords and Deviltry, White Wolf also chose to include the first two stories from Swords Against Death. For a first-rate assessment of these first two volumes, check out Justin Alexander's review on The Alexandrian.

The quality of each of the stories varies as much as the tone, but generally, the overall theme is one of sadness and loss.

The collection starts with a map of Nehwon and two poems entitled "The Gray Mouser: 1" and "2," followed by a brief "Introduction," in which Leiber, in fanciful style, describes the world of Nehwon. Its primary purpose is to set the mood and prime the reader's imagination for adventure and exploration.

Then the actual storytelling begins, with "The Snow Women" (first published in Fantastic, 1970). Leiber describes a people that seem an amalgam of Viking and Inuit, merging the piracy and fierceness with simplicity of life and adaptation to a frigid wasteland environment. Fafhrd is introduced as a youth of eighteen years, not yet considered a man, but plagued by his controlling mother and her coven of witch-women. The tale is one of tragedy and liberation, and is brilliantly told. Fafhrd's dilemma between love and wanderlust, between duty and repression, is exacerbated by the treatment he receives at the hands of many of the other tribesmen. In the end, Fafhrd gets his freedom, but at a price, and he learns of deceitfulness and treachery.

The second story, "The Unholy Grail," is much more straightforward, much less full of twists, turns, and is also much shorter than its predecessor. In-all, it isn't as good as "Snow Women," but it succeeds at explaining the Mouser's origin satisfactorily and sets the stage for his meeting with Fafhrd.

"Ill Met in Lankhmar" is, perhaps, one of the best stories I've read. Although it was penned quite late in Leiber's career, it is, nevertheless, one of the most iconic adventure stories I've ever read. It is the undoubted inspiration for every sort of cityscape adventure devised for Dungeons & Dragons, and is one of the tales that most likely necessitated Leiber's inclusion into Gygax's illustrious Appendix N. Lankhmar is described more in feel and tone than in actual physical design. The names of streets and the description of the smogs that perpetually blanket the city create a tone and atmosphere at times reminiscent of London, and at other times ancient Rome at her decadent height. Leiber's writing is at its tightest and most solid. There is never a wasted word throughout the story.

"The Circle Curse" comes off as a brief interlude linking the younger Fafhrd and Mouser to their older versions Leiber wrote of in later stories. The problem is, the story is basically filler with little or no real purpose behind it. Leiber summarizes the characters' first encounters with their curious wizard-mentors along with a montage of places they journey and a few things they witness during the three-year tour of Nehwon they make. Then, they reluctantly return to Lankhmar. Though this chapter serves as a bridge between the prequel stories and Leiber's earlier yarns, it does so by placing all of the dramatic weight at the conclusion of "Ill Met in Lankhmar" on the chopping-block. The character's flight from the city was charged with emotion, but to go from a highly detailed adventure to a brief summary of places and images is just disappointing. Leiber boils three years of travel down to a few paragraphs that leave the reader wanting more than what is given, in the end, leaving him feeling robbed that the majority of events took place offstage.

"The Jewels in the Forest" closes the book on a brilliant note. Being Leiber's first Lankhmar story, originally titled "Two Sought Adventure," it was the 1939 debut of Fafhrd and the Gray Mouser. The tale begins in media res, which serves well, because all of the lead-up to this particular excursion is summarized skillfully in conversation and through the Mouser's own thoughts. The characters come off as extremely archetypal of themselves, which is fitting since this was their first appearance in print. There is a fantastic mix of swashbuckling action, mystery, and exploration to keep the reader engrossed. Leiber scatters clues throughout the yarn that leave the reader guessing until the end--some of the guesses will be invariably incorrect due to a few false clues left by the author in order to ensure the surprise at the end of the tale.

Leiber writes in a style that almost parodies himself and his subject-material. It keeps his stories fresh and entertaining, ensuring that a more lighthearted tone prevails, despite the tragedy the characters might experience. There is a certain humor to the work, especially considering that, though Fafhrd and the Gray Mouser obviously take themselves far too seriously for much of this volume, the author does not. He does not descend to puns or absurdity (such as Piers Anthony's Xanth novels, or Terry Pratchett's Discworld) series. The lightheartedness keeps the pace of the stories in motion. Leiber doesn't let the low-points in the characters' lives encumber him or the reader. Instead, their pain and suffering provides drive and direction to characters' actions.

This theme of tragedy, however, doesn't seem entirely characteristic of Leiber's earlier work, if "Jewels in the Forest" can be judged as typical of his early works. Indeed, although the overall lighthearted tone seems to be at odds with the general aura of misfortune that surrounds the characters, the two flavors don't clash, but instead play off one-another. The overall voice is optimistic; Leiber is leading up to the main events, which are inaugurated with "The Jewels in the Forest." The tragic backstory is a vehicle to provide drive, purpose, and determination for the two rogues, and to explain their deep friendship and camaraderie.

It seems that Leiber is a bit of a misogynist. Women throughout this collection are not depicted in a very positive manner. In "The Snow Women," the women of Cold Corner are depicted as jealous and petty. Fafhrd's mother, Mor, in particular, is especially vindictive, having used her magic to "punish" her husband with death when he climbed a mountain against her wishes. Her ice magic nearly kills her own son repeatedly. She is incapable of bending, and unwilling to see how her behavior is literally driving her son away from her and towards civilization. Similarly, Fafhrd's girlfriend, Mara, is repeatedly overcome with petty jealousy, and sets her brothers to beat (and perhaps kill) him, then regretting her behavior once she realized the danger she had placed him in. In "The Unholy Grail," Ivrian is a weak-hearted, easily manipulated, cowardly girl with absolutely no spine. Once she is paired with Vlana in "Ill Met in Lankhmar," the two women cajole and humiliate Fafhrd and the Gray Mouser into making an ill-advised foray into Thieves' House that nearly kills them (however, it also saves their lives from strangulation). Leibers' females are depicted as fickle, ruled entirely by their passions. They are portrayed as vindictive, petty, jealous, manipulative, or callow, but never as strong, brave, intelligent, or trustworthy.

The development of the main characters themselves is handled brilliantly. Fafhrd and the Gray Mouser are not static characters. Indeed, as earlier mentioned, Leiber doesn't take them as seriously as they take themselves, and this is nowhere more apparent as in "Ill Met in Lankhmar," which is probably the best story in the entire book. Fafhrd and the Mouser are very insecure about themselves and their relationships, and this insecurity translates into bluster and bravado. The Mouser, especially, takes great pains to try and impress Fafhrd upon their first meeting. Coupled with their beloveds' goading, the two scoundrels attempt to infiltrate the Thieves' Guild. Their cocksure attitudes are fueled by their exceptional combat skills (in addition to Mouser's acrobatics), but it is evident through their behavior that they lack wisdom. The guildsmen see through their feeble disguises, and the Mouser runs off at the mouth where a much wiser man would have shut up and chosen his words much more carefully. The insecurity, bravado, and verbosity is quelled, however, once tragedy strikes, and except for a single comment, the two characters are completely silent for the remainder of the tale, during which they exact what vengeance they are able. This change persists, even into "Jewels in the Forest," where the two rogues are no longer so insecure, and no longer needing the esteem and approval of others, but are obviously comfortable with their skills, more realistic about what they can and cannot achieve, but still a little apt to bite off more than they can chew now-and-again.

This book provides a delightful introduction to two very iconic characters that have had a powerful effect on the sword & sorcery genre since their creation. They were birthed in an era immediately following the demises of Robert E. Howard and H.P. Lovecraft and the retirement of Clark Ashton Smith, and inaugurated a new age of fantasy writing that would generate the likes of Michael Moorcock and Roger Zelazny.

Lankhmar: Tales of Fafhrd and the Grey Mouser by Fritz Leiber
Style: B
Substance: B
Overall: B
Posted by Dave Cesarano at 8:23 PM