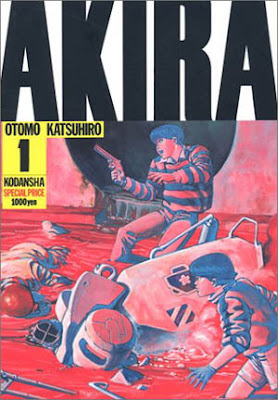 Almost a full decade ago, I attended Otakon. It was there that I discovered the serialized 単行本 (tankobon) of the Japanese 漫画 (manga), アキラ (Akira). Now, I had seen the 1988 film for the first time in 1997 (I was a freshman in college at the time), and was just developing an interest in アニメ (anime). The film had received mixed reviews. It's painstakingly detailed animation was a phenomenal labor of love, but the script suffered from trying to cram several years and over two-thousand pages of manga into a 125-minute feature.

However, I had been so impressed by some of the themes explored in the film that I wanted to read the manga and see how the story differed. That's why it was fortunate that I had stumbled across the first volume, translated into English by Dark Horse comics.

Akira, a 2,150-page epic manga written by 大友克洋 (Otomo Katsuhiro), is a landmark in science-fiction and an incredible visual essay on fear, jealousy, and betrayal, alienation, and societal collapse all in comic-book form. On the surface, it appears to be just another cyberpunk story of ultra-violence, superhuman powers, and petty gang warfare against a backdrop of political unrest. However, Otomo's story is much deeper than that.

The central characters, 金田 (Kaneda) and 鉄雄 (Tetsuo) are two delinquent teens in a motorcycle-riding street-gang in a futuristic Tokyo that is constructed on a landfill dominating Tokyo Bay. The story introduces them immediately, racing along abandoned highways toward the enormous crater where the first bomb that had touched-off World War III had fallen. Otomo sets the stage for the tensions between the two friends that will come to dominate the rest of the story.

Tetsuo narrowly avoids crashing into a pale, wizened child with the number "26" stamped upon his hand. There is an explosion, and Tetsuo is injured. His fellow gang members surround him, but Kaneda notices the strange, unnatural child, who fades away. Moments later, the military arrives. Tetsuo is taken to a hospital, but the boys do not know which one. Kaneda's desire to find his friend, his anger at the child for hurting Tetsuo, and his interest in a young girl attached to a revolutionary movement, entangle him with the insurrectionists and attract the attention of the military.

Meanwhile, Tetsuo emerges from the hospital suffering from headaches and desperate for narcotics in order to relieve the pain. Tetsuo's character suffers a deep transformation, as his friends recognize and understand him less and less. Simultaneously, deep veins of jealousy and insecurity begin to surface in Tetsuo's personality, especially toward Kaneda. Tetsuo gradually becomes more and more narcissistic and detached from the world around him.

Kaneda is much smarter than he appears, but his brains are completely subsumed by his own primal urges. Brash, cocky, and certain that he'll live forever as only a fifteen-year-old can be, Kaneda always seems to get through his situations with more luck than smarts. However, this isn't entirely the case. Kaneda's selfishness and arrogance conceal a deep concern for the well-being of his friends. He is, at core, a character that possesses a certain degree of honor, despite his unscrupulous, roguish exterior. His cockiness and disrespect for authority would seem quite shocking to a Japanese reader of the 1980s, although to an American, he'd seem quite typical of a youthful hoodlum.

Kaneda's behavior is driven by base motivations. His pursuit of Kei is simply a product of sexual attraction, although he gradually begins to genuinely care for her. He is never lured by her political ideals, nor is he really driven by curiosity. Kaneda's primary drives are mundane and simplistic. Indeed, he is naïve. His bravery is largely a product of his ignorance and his youthful certainty in himself. By the end of the first volume, however, much of his naïveté and self-assurance is challenged by forces that are, quite obviously, beyond his control, and Kaneda experiences true loss.

The transformation of Kaneda's relationship with Tetsuo is incredibly important. Tetsuo's own arc is rapid--having always been weak and small, Tetsuo is tyrannical when he discovers his power. Also youthful and naïve, Tetsuo cares little for the suffering of others, possibly because he believes no one has ever cared for his own suffering. When Tetsuo discovers his own powers, all roles are reversed. Kaneda is resentful, Tetsuo is indignant and desires to forcibly subdue his former friend. This betrayal fuels Kaneda, gives him purpose and a desire to see Tetsuo neutralized. Indeed, what angers and pains Kaneda the most is that Tetsuo forces Kaneda to choose to kill him. This seems to come off as the most bitter and painful betrayal of all.

Otomo's story is one of a society divided against itself. The government is lazy and corrupt, with the military secretly accumulating incredible amounts of power in order to prevent another holocaust such as that which sparked the Third World War. The art depicts the relatively new city as dilapidated, covered in graffiti, and very much unlike the Tokyo that emerged from the reconstruction after the Second World War. This is a complete reversal of reconstruction--Japan is trying to resurrect itself a second time, and is failing.

Alienated from society at large, the youth descend into anarchic tribalism, owing allegiance not to ideologies but to one another. This makes Tetsuo's betrayal of Kaneda and his motorcycle gang so bitter--Tetsuo's betraying his personal friends, his tribe, and his first, greatest allegiance. As their world begins to break down, the characters reach out and attempt to forge new connections with others. Tetsuo seeks to control all of his new relationships from a position of power, while Kaneda's grasping for Kei is much more simple, innocent, and childlike, reflecting his adolescence.

Otomo's first volume of Akira is a complex work, with equally complex artistry. Otomo's skillful use of angles in many of his frames suggests power or weakness of a character, as well as enhances the relationships between the characters themselves. A great deal is communicated without dialogue, and the reader must be willing to pay attention to each frame of the comic, and not simply skip through. There is a lot that may be missed due to lack of narration common in Western comic books. The violence is pronounced but brief and Otomo doesn't dwell upon the bloodshed. The world he depicts is dirty and decaying, and the visual decay that the pictures show reflect the spiritual and political decay within society.

My only complaint is that, in order to facilitate easy reading for non-Japanese audiences, all of the pages have been reversed. It's actually quite obvious to see--drivers sit on the wrong side of the vehicle, and everyone seems to shoot left-handed. But this was a decision by Dark Horse, and has little bearing on the writing and art itself, except that I don't get to see Otomo's original vision undistorted.

Altogether, this is a fantastic book. One should not be fooled by the fact that it is a comic book. Otomo's first volume of Akira is much, much more than that. Through the cyberpunk genre, Otomo is exploring themes of power in relationships, both between individuals and within groups. He is also delving into the human psyche and what he digs up isn't necessarily comforting to the reader, but perhaps that challenge is what makes this such an important story. As a comic book, Akira excels far more than it does on film or it would as a novel. Without the visualization provided by film or comics, Otomo's story would have been weaker, but the film version's time constraints forced the writer to truncate far too much, so that a lot of these relationships and themes are lost and undeveloped. Thus far, the manga version is far, far superior.

Posted by Dave Cesarano at 8:41 PM

I read the comics in the early 90's then saw the film. I preferred the comics. Awesome stuff, and big influence on my superhero games.

That's awesome. Anime and manga didn't effect my roleplaying very much, but that's because I didn't really get into them until college.

I could totally see running an Akira-inspired game using a superhero engine, assuming that engine had a decent psionics rule-set. My favorite by far is The Complete Psionics Handbook for 2nd Edition AD&D, simply because it is arranged so scientifically and not just as another set of spells. However, I hated the system of power checks as very inelegant.