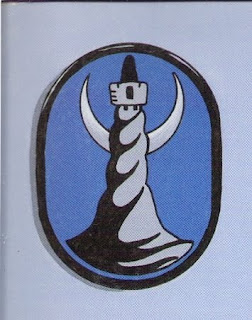 A summary and cast of PCs can be found here, at the beginning of Session 6's AAR.

Our heroes thought they were safe at Eagles Eyrie, resting and preparing to set off southwards. However, a report from the dwarven lookouts from their concealed posts told of Zhentilar--not the standard town watch, but actual heavily armed and armored soldiers--approaching the Eyrie. They ran afoul of one of the dwarves' traps then withdrew.

A debate erupted in the Eyrie--should the dwarves leave their newly-liberated outpost to the Zhents or defend it to the death? A few blamed the PCs for leading the Zhents there, but Baravis' devilish charm convinced them that it wasn't their fault. The dwarves were convinced to depart and gathered up the bones of Elshar Kurl and Dorn the Grim. During their sojourn, the PCs learned the lore of the dwarves' flight from Eagles' Eyrie:

Sending their kinsfolk to the halls of their cousins in the Mines of Tethyamar, Elshar Kurl, the priest, and Dorn the Grim, the chieftain, remained behind to buy time for their clan, knowing that they would probably die. They kept up the appearance of an entire clan resisting Colderan forces and the rest of the clan escaped.

The two dwarves sought to destroy the upstart mage and his curse by forging a sword of cold iron. They made the blade of dark ironstar steel and chanted sorcery with every strike of the smith's hammer, but ultimately the blade failed them. Their bodies are only skeletons now, clothed in remnants of chain mail armor.

The bones were gathered up and were taken to be interred at Anathar's Dell in a temporary tomb until the Eyrie could be retaken. Baravis led the escape from the Eyrie. The dwarves set out south on the Tethyamar Trail, disguised as simple traveling tinkers. The PCs stuck to the countryside. After two days, they arrived at Castle Daggerdale, where they spent the night, where Sven fell ill with filth fever. The next two days were rough on the PCs as they struggled to keep away from Zhentilar patrols on the road and reach Anathar's Dell as Sven weakened. They made a litter that Drog dragged through the fields and meadows as they wandered south.

INTERLUDE
Eragyn, swathed in flowing black robes, stepped into the illuminated dome of Eagles' Eyrie. Constable Tren Noemfor followed sheepishly, clutching a few papers and trying to avoid the steely gaze of the priestess of Cyric.

A Zhentilar trooper stepped forward. "The forge has recently been in use, priestess. It is uncertain if our quarry was here, but someone was until very, very recently. The coals are still hot."

"Copied and sent away, as you ordered." Eragyn stretched out a hand and he placed the parchment into her hands. She looked at them briefly.

"Sven Lackman of Waterdeep, passport. An identification paper from someplace called Sigil for a certain Baravis. And we know the one was a Zhent traitor named Vlad, from whose sentence you apparently allowed to escape." She thrust the papers at Noemfor. "Your superiors in Zhentil Keep will not be happy at your incompetence." She sneered. "You underestimated them. I will not make the same mistake. However, I know their weaknesses better than you."

She turned to a sergeant of the Zhentilar. "I want those adventurers found. Send a patrol down every road leading out of the Dale. Send scouting parties to every town and village from here to the Dagger River and beyond."

The sergeant swallowed thickly. "Beyond, priestess? Even the Dagger River vale isn't safe--Randal Morn's Freedom Riders are active and hold the allegiance of nearly every river settlement and the entirety of the Dale south of it!"

She shook her head. "I understand your concerns, but they must be found. I want them and I want Colderan. Find them both!" She turned back to Noemfor. "If they escape the Dale, it is no matter. Every agent and spy from here to Westgate will soon know of them and know of the bounty I've placed upon them. We'll have them soon enough." She smirked. "Or at least their ears."

BACK TO THE PCS
With the help of Baravis' Healing skill, Sven made a full recovery at Anathar's Dell. There, Baravis attempted to mend the breach between the Brightblade Clan and House Morn. An agent of the Freedom Riders met briefly with the PCs and took their concerns regarding an alliance between the two factions. He asked if the PCs knew anything about the whereabouts of the Sword of the Dales.

They departed, following the Tethyamar Trail to the crossroads with the Northride, where they spent the night with a patrol of Shadowdale guardsmen at the Shrine of Torm. Upon arriving in Shadowdale the next afternoon, they decided to investigate the mysterious trampling of fields in the northern village as well as question Lhaeo, Elminster's apprentice, regarding the whereabouts of the Sword of the Dales.

The PCs are at a crossroads--they can seek information on Finott, a wizard who disappeared before the Time of Troubles who was an expert on Shraevyn the Weapons-Mage (maker of the Sword of the Dales), or they can follow up on other adventuring opportunities in Shadowdale itself. We'll see what they decide to do this Friday.

The arms of Lord Mourngrym Amcathra
Lord of Shadowdale
Posted by Dave Cesarano at 7:06 AM

the guards have nothing on DROG hahaha