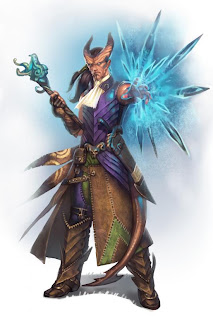 Baravis: Played by Luke. A tiefling warlock 1/favored soul 1 from Sigil, he knew something strange was up when a few guys bearing pendants with a black sun and white skull tried to kill or kidnap him. One day, walking through the streets of Sigil, he did something to annoy the Scratcher who basically portaled him to Faerûn. He wandered through the forests until he found Drog encamped by a path. Resigned to his fate, he seeks an answer to why the Cyricists (whose symbol he's identified as theirs) want him dead. He's become a follower of Marthammor Duin, the Dwarven god of wanderers, with whom he's made a pact.

Drog: Played by DJ. A Rashemar barbarian 2 who is on his dajemma--his coming-of-age journey into the lands outside of Rashemen. A stalwart warrior of honor who has a way with the ladies (who admire his rugged looks and massive muscles).

Sven Lackman: Played by Shaun. A half-elven rogue 1/urban ranger 1 from Waterdeep whose parents were Harpers murdered by the Cult of the Dragon. He has devoted himself to Hoar, god of vengeance and swift justice. Sven is being a bit retooled by Shaun (with DM consent). Sven is a bit reckless and impatient, but is developing into a powerful finesse fighter. 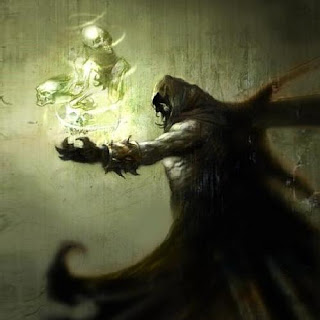 Vlad: Played by Alex. Vlad's parents were Zhents who died during the Banedeath, when the priests of Cyric murdered (or forcibly converted) all followers of Bane in Zhentil Keep. Left for dead, a nameless god approached Vlad and made an agreement with him--Vlad would become a dread necromancer (see Heroes of Horror) so long as he kept the Pact. Vlad seeks for the truth of this unknown deity while swearing vengeance against Cyric and all of his followers.

THE STORY THUS FAR
The PCs met in Shadowdale, where they heard rumors of a Dream Fever in Dagger Falls, chief town in Daggerdale. Forty or fifty years past, the Zhentarim (a.k.a. the Black Network) ousted the rightful rulers of Daggerdale and backed a usurper, Malyk. Then, twenty years past, Randal Morn and the Knights of Myth Drannor slew Malyk and retook the Dale. Zhentilar forces then invaded and captured all of the Dale north of the Dagger River. Randal Morn leads his Freedom Riders and only controls part of the Dale, while the Zhentarim controls Dagger Falls and the Zhentilar (the army of Zhentil Keep) extorts or raids villages between the Tesh and Dagger rivers.

They set off, encountering the Brightblade dwarven clan at Anathar's Dell and learning that two hundred years past, Colderan Morn, Lord of Daggerdale, exiled them from their home in Eagle's Eyrie, overlooking Dagger Falls. They encountered a patrol of Freedom Riders, who took them to Randal Morn. They were tried for being suspected Zhentarim (Vlad's accent gave him away as a Zhent), but Tunfer the Stout's zone of truth spell exonerated them. With Randal Morn's favor, they arrived at Dagger Falls and cleared out the Eagle's Eyrie.

They made contact with Loudon the Cooper, a supporter of Randal Morn, at the Red Rock tavern, but were captured later at the Teshford Arms inn resisting a summons by the Constable. Sven's attempted knifing of a mercenary in the Constable's employ and Vlad's spellslinging got them booted from town without their gear and Vlad slated for a caravan back to Zhentil Keep. But all was not lost--the Brightblade dwarves, on a pilgrimage to the Eyrie disguised as traveling tinkers, discovered the PCs had cleared it out and began to restore it in secret, giving the PCs a base of operations. They staged a daring rescue on Vlad's caravan, then snuck into town, headed for the ruined Temple of Lathander, having learned that all the troubles with the Dream Fever and the strange wood-woses (mysterious dwarf-sized night stalkers) had begun shortly after Eragyn the Dark, priestess of Cyric, had disappeared in the Temple crypts.

The PCs battled several wood-woses and a juvenile hook horror, befriended a nixie, and even met Colderan Morn himself--not 200-years dead as they had once suspected.

Session Six
The PCs made their way to Colderan's headquarters, centered around his crypt, and a great battle ensued. Colderan was ready for them--4 skeletons attacked as they entered the anteroom. Colderan created a wall of thorns and ordered his remaining wood-woses to gather his things and help him escape. The PCs managed to kill most of the wood-woses, but during the battle (which was fought in several rooms and corridors) Colderan escaped, trapping Sven in another wall of thorns and nearly killing him (negative hit points). Baravis stabilized him with a cure minor wounds orison, Drog hacked him out of the thorns, and the PCs discovered eight sleepers, several corpses, a strange net, a treasury, and Colderan's library and notes. After reading through his notes, the PCs destroyed the net of dreams (the cause of the fever) and the sleepers began to awake. Among them was Eragyn the Dark and a Zhent guardsman. Eragyn had been bound and gagged, but Baravis and Vlad disagreed on what to do with her. Vlad wanted to kill her outright--she was evil and served and evil god. Baravis wanted her to stand trial for her wickedness. They quarreled and Drog broke it up. Baravis tried to talk with her, but gave up all attempts at diplomacy when Vlad vocally advocated killing her outright. Eragyn saw the PCs as traitors, especially considering they were still wearing the Zhentilar tabards with the arms of the occupying forces.

They followed a passageway to a wall of masonry. A dwarf victim of the Dream Fever, Boront, found a secret door into a room full of confiscated contraband--including the confiscated masterwork studded leather Baravis had commissioned, Sven's masterwork dagger, and Drog's masterwork greatsword. Franter, the Zhent guard, exclaimed that the secret door led into one of the basements of the Constable's Tower! Baravis, hoping to make peace with the Constable (at least, for now) sent Franter up to the Constable. The plan backfired. Zhentilar troops opened the trapdoor with crossbows trained on the PCs. Eragyn was freed by the troops and the PCs fled through the secret door. They closed it, hoping the Zhentilar wouldn't locate the opening mechanisms. Just to be sure, Drog jammed a sword into the doorjam to block it.

The situation looked hopeless. The Zhentilar would be waiting at the temple entrance for the PCs. So, they decided to escape via the underground river.

Led by Boront (to whom Drog had given a longsword), the townsfolk fled through the tunnels and out of the temple, while Drog, Vlad, Baravis, and Sven (whom Baravis had healed with cure light wounds to demonstrate the power of a benevolent deity to Eragyn) managed to escape the tunnels via the stream. When I revealed (using Maptool) that the stream had spilled them out at the waterfall, the players cheered in triumph. Yet another seemingly hopeless situation turned into a victory by the PCs.

Colderan had escaped. Eragyn was attempting to seize control of Dagger Falls from Constable Tren Noemfor. However, the Dream Fever had been ended and the townspeople were safe from the depredations of the wood-woses. Colderan's plans to take over the town were foiled, as were any hopes of him allying with (or being backed by) the Zhentarim. The PCs had made some enemies, but as they rested the rest of the day in the Eagle's Eyrie, they knew that they had succeeded at something worthwhile. Now, they had to contact Loudon the Cooper for their reward, try to find Randal Morn to warn him of Colderan, his thrice-great grandfather, and return the holy relics of Lathander that they had discovered to the Temple of Lathander in Shadowdale. Baravis leveled up (now a 3rd-level character). However, Sven may have contracted filth fever from the swarm Colderan had summoned beneath him. The path ahead is murky yet filled with possibilities.

Arms of the Zhentilar
Army of Zhentil Keep
Posted by Dave Cesarano at 10:14 AM