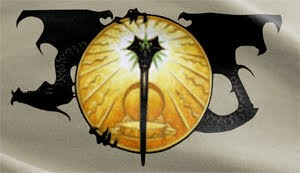 The Flag of Zhentil Keep 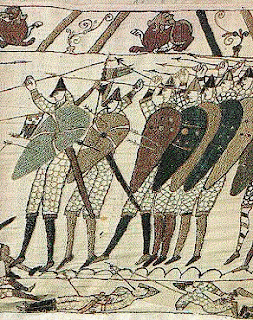 Sometimes, a DM has to be a jerk in order to make the world believable and more importantly to adjudicate fairly. This is difficult, especially when the DM likes the characters and the players and doesn't want to ruin the fun.

Case in point, Session Four of my Forgotten Realms game.

In Session Three, the PCs cleared out the Eagle's Eyrie, an old Dwarven outpost that had been built into a rocky crag just south of Dagger Falls across the River Tesh. It once overlooked the trade routes east to the Moonsea and south through the Dales from the ancient Dwarf realm of Tethyamar. During the session, they'd fought two goblins, managed to scare off a brown bear by banging metal items together, gotten scratched by eagles, bitten by a swarm of bats, and assaulted by fire beetles. Baravis (Luke's character), the tiefling warlock, said a few prayers to Marthammor Duin, the dwarven god of wanderers and exiles, asking him that the Brightblade Clan could have their home back.

Baravis seems to have developed a real liking for the dwarven people.

Well, as the new session picked up they were drinking at the Teshford Arms across the ford from Dagger Falls when two mercenaries and an orcish messenger entered and demanded the PCs come with them to see the Constable, Tren Noemfor. Now, remember, Dagger Falls is fully under the control of the Black Network and is crawling with Zhentilar soldiers. Well, Baravis is already drunk (and hence only capable of healing 1 hp per day since he's not resting--dealing with alcohol inhibits healing because it is strenuous on your liver and other organs) and it's only 10 or 11 in the morning (his penalties due to Lathander's annoyance still apply each morning).

Well, Vlad tries to outwit the orc with questions like, "Are we the adventurers you're looking for? What are their names?" The orc only knows that he's to summon PCs matching their description into the Constable's Tower. The mercs try intimidation checks, but Baravis isn't impressed (although the others are). Baravis tries to intimidate the mercs, and is mildly successful on one. "I just wanna finish my drink."

The one merc picks up Sven's wine glass and dumps it on the floor. So, Baravis eldritch blasts the wine bottle.

POW, the one merc decks Baravis, who only has a few hp. The subdual damage is enough to knock him out. Vlad cast's cause fear on the orc, who flees, calling for the nearest Zhentilar patrol walking their beat.

In the intervening rounds, Sven's managed to stab the one mercenary, Vlad cast ray of enfeeblement, and Drog got in a fistfight with the other. Finally, the Zhentilar burst in with clubs. The owner of the inn is screaming in fury at the mess everyone is making of her bar. One-by-one, the PCs are beaten into unconsciousness by the seven Zhentilar soldiers (who, by-the-way, have the coat of arms to the left emblazoned on their surcoats and tabards). The Zhentilar kick the comatose bodies for additional subdual damage before dragging the PCs to the Constable's Tower.

They wake up in the dungeons. They're left there. Baravis tries to eldritch blast his manacles but he can't do enough damage to get around their Hardness. And besides, the racket is met with a threat to cut his hands off. They're left to dangle in chains for three days with no food or water.

Then, Baravis does the one thing that creates a glimmer of hope. He prays to Marthammor Duin.

They suffer from exhaustion and are down to 1 hp when Tren Noemfor comes to a decision. Baravis, Sven, and Drog are stripped of everything, escorted across the ford and told they're not to come back to town or they're dead men.

Now, let's recap. They're down to 1 hp, they have NO weapons, armor, gold... nothing but the clothes on their backs. Anything of worth is gone, including Sven's masterwork dagger from his family and Drog's masterwork greatsword from his grandfather. Gone. They are an inch away from a total-party-kill.

Back in the Constable's Tower, Tren Noemfor grills Vlad on why he left Zhentil Keep, what he was doing with a party of misfits like that, and what he knows about the Dream Fever and the disappearance of the priestess of Cyric beneath the ruined Temple of Lathander. This is conducted in the tower's torture chamber but Vlad satisfies Tren's curiosity so he doesn't need to be tortured. Tren says that Vlad's friends have been executed (he wanted to see Vlad's reaction) and returned Vlad's passport and belongings and put him under house arrest in the Teshford Arms inn until he is to be "escorted" home to Zhentil Keep by the next caravan. Red Morgan, the caravan chief, is given papers authorizing a formal "inquiry" of Vlad once he's reached Zhentil Keep--i.e. he's going to be tortured and if found guilty, tossed in prison or sent to work in the mines.

Well, things are looking grim. I'm actually worried. One bad encounter roll and they're toast. A goblin or kobold could kill them.

Sven and Baravis aid Drog in his Survival check (even with penalties, they find enough food and water to keep alive) and they hole up in the ruins of the lookout tower at Eagle's Eyrie (they wanted to go inside, but the bear had returned to the cavern entrance). Meanwhile, Vlad tried to go to Dulwar Leatherworker's shop but was prevented. So, he told the innkeeper to pass along a message that he needed permission to visit the leatherworker's shop and get some things he'd ordered. Bad idea.

Sven snuck to the Leatherworker's that night and discovered that the Zhentilar had gotten the message and decided to rough Dulwar up and take the masterwork studded leather armor Baravis had commissioned and paid for as well as Baravis' regular leather suit that was being repaired. Told Fulgath was just as likely to give him back his crossbow as turn him in, Sven asked Dulwar to pass a message along to Loudon the Cooper that they were holed up at Eagle's Eyrie.

Making his way back to the Eyrie, Sven dodged the brown bear by climbing a tree and discovered why it had fled it's lair--DWARVES! Marthammor Duin had heard Baravis' prayer. The message he'd asked Loudon to send to them last session paid off when the dwarves arrived to reoccupy the Eyrie. Loudon smuggled some weak weapons and a set of padded armor to the PCs, who were being bed-rest healed by a dwarven physician, and told them that Vlad was leaving in 2 days with a caravan bound for Zhentil Keep. The dwarves rewarded the PCs by taking the carapaces of the four fire beetles and fashioning a chitin breastplate worth a whole heck of a lot of gp! Baravis was named a Friend of Dwarves (he gains the honorary title "Dwarf-friend" that he can tack onto the end of his name) for his growing faith in Marthammor Duin and his services to the Brightblade Clan.

Together, they planned to raid the caravan and rescue Vlad. In the dead of night, sneaking across the river to set up an ambush, Baravis spied two short figures trying to sneak into a Dagger Falls cottage window. He eldritch blasted one, killing it. The other fled into the gloom. Baravis and the dwarves examined it, but it wasn't a dwarf. It's body was short and muscular like a dwarf, but it had brown skin, thick thatchlike hair and beard, tangled with vines, and a supple yet strong, reedlike form. All-in-all kind of treelike. When they threw the corpse into the river, it floated downstream.

Later that day, the ambush went off. The three wagons got away, but the dwarves and PCs managed to rescue Vlad and kill a powerful Zhentilar officer-woman who wielded a battleaxe and nearly killed Drog. Loot was gained, but not much. All but Vlad earned a new level (with Sven multiclassing into Urban Ranger, Drog into Ranger, and Baravis considering Cleric of Marthammor Duin and pledging himself to the dwarven god).

Lots of experience was handed out. Yes, the PCs got into a lot of trouble and lost a lot of their loot. Precious items were diced away to Zhentilar soldiers throughout the town and they may never see their heirlooms again. But they still turned what appeared as a hopeless situation into something much more positive by being smart, having faith and being in the right place at the right time. They didn't just give up. On top of that, even though it wasn't smart to do, when Baravis was knocked out by the merc, they didn't just sit back and take it, they fought together. Yeah, it was kind of dumb for Sven to draw his dagger and for Vlad to cast spells--if they hadn't resisted they'd have been taken quietly, and if they'd just brawled, they'd probably have been handed back their gear and frog-marched into the dungeon beneath Lathander's temple or kicked out of town temporarily. That wasn't too bright on their part to draw daggers and sling spells when their lives weren't in immediate danger.

But like I said, they didn't give up. It would have been easy to do so. Nope, they immediately started coming up with plans to get their stuff back and save Vlad. Triumph in the face of adversity. They earned a lot of XP for their role-playing, for not giving up despite their dire situation, for faith, for turning a hopeless situation into a victory, and for showing party solidarity in standing up for Baravis (despite his drunken foolishness in blasting the bottle and starting a fight) and saving Vlad. Great session. 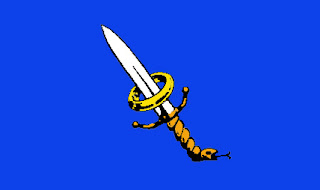 The Flag of Daggerdale
Posted by Dave Cesarano at 3:48 AM

This Baravis character cracks me up! Intimidating everyone. Blasting everything. Good show!

Hey, glad you are entertained by all this! Yeah, Baravis is certainly entertaining.