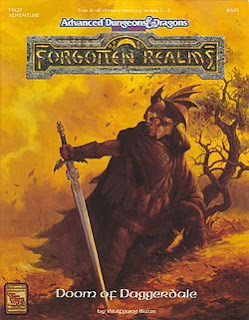 Well, the current adventure (in case you're wondering, I'm running, or trying to run, the Doom of Daggerdale adventure, which you can peruse in order to see just how far the PCs have deviated from the adventure) is drawing to a close. Our heroes have finally made it into the catacombs beneath the Temple of Lathander, seeking out the Priestess of Cyric, Eragyn, hoping to put an end to her and with her, the Dream Fever that's been plaguing the folk of the Dale.

We had to split this session into two short ones because of Alex's (Vlad's player) work schedule.

Session One
Having successfully rescued Vlad, the PCs and their dwarven allies flee into the forest as an Zhentilar patrol heads toward the scene of the combat. They'd seen the ambush from the parapets atop the River Gate in Dagger Falls and sent reinforcements to see if they could save the caravan. They arrived moments too late.

The PCs and their allies fled into the forest, but Baravis managed to sneak back to spy. He managed to hear that the patrol misidentified the tracks (their scout rolled a 1) and thought that goblins had attacked the caravan. Once they realized the caravan wagons had managed to escape, they returned to Dagger Falls. Sighing with relief, the PCs and dwarves walked two more miles downstream and fashioned a raft to cross the River Tesh. They returned to the Eagle's Eyrie by nightfall.

That evening, Baravis received a vision from Marthammor Duin, the dwarven god of wandering, living aboveground, and friendship with non-dwarves. Baravis pledged to aid and protect dwarves wherever they may be and to serve Marthammor Duin faithfully. He awoke with a level of Favored Soul (see Complete Divine) and immediately cast cure light wounds on any dwarves injured during the caravan fight. He then tended to his party members.

The dwarves were impressed by this. Kuldar, the chief of the dwarves, gave Baravis a copy of their holy texts to guide and shape his newfound faith. It was like roleplaying the birth of an apostle or saint of some sort. The Brightblade dwarves finished the chitin armor for Drog (DJ's Rashemar 2nd-level barbarian) as a gift for the PC's clearing of the Eyrie and returning it to the Brightblade clan. However, they feared for the safety and secrecy of their new outpost so they wished for no further risks, what with the Zhentarim so near in Dagger Falls.

After a few days of spying on Dagger Falls from the Eyrie, the PCs planned to infiltrate the town and sneak into the Temple at night. As they approached the Teshford Arms, they saw two off-duty Zhentilar ambushed and killed by the strange, short night creatures. When the creatures began to drag the bodies toward the woods, the PCs ambushed and killed them. They discovered that the creatures bled sap, and that sap was also coating the copper spearheads the creatures wielded. Baravis realized that it was a poison. Drog took two of the spears for future use. Vlad and Baravis donned the tabards and chain mail of the fallen Zhentilar and hid the bodies in the woods. Then, everyone snuck across the river. Drog and Sven took a long, circuitous route through outlying fields to avoid any Zhentilar in the town beyond the walls; they witnessed two more of those creatures sneaking into a house. Sven advised inaction: "We can't save them, we have to stick to the plan." They watched from the distance as the two creatures exited through the window of the cottage with a shimmering net or web. They then vanished into the night. Drog and Sven met up with Vlad and Baravis near the Forest Gate of the town. Using their disguises and Vlad's native Zhent accent, they convinced the two gate guards that they were their relief. Happy to go and drink, the Zhentilar left, allowing Baravis to open the portcullis enough for Drog and Sven to crawl under.

They snuck through the town, sticking close to the town wall, then saw the two night creatures climb into the ruins of the Temple of Lathander ahead of them. The PCs followed, sneaking past the guards stationed at the temple and going down into the darkness.

Session Two
They descended the stairs in the ruin, avoided fighting two osquips (territorial rodent-creatures) in the wine cellar and crept through the catacombs beneath the temple. There they discovered a secret door leading to a room containing the holy items of Lathander's temple--silver censers, golden candlesticks, and a holy symbol. They agreed to return these to the temple and prayed to Lathander before they took the objects.

They found a hole in one crypt that led to tunnels. They followed the twisting path until they encountered a young (medium-sized and not-so-powerful) hook horror. Despite its size, it still gave the PCs a good pounding, but luckily Baravis could heal. However, the noise of the fight drew some of the night-creature scouts. Soon, a battle ensued, and the PCs had slain five of the creatures, with Drog and Sven managing to avoid the effects of their poison blades. Baravis took the head of one as evidence in case they encountered the Constable on their way out.

They eventually found a small pool in a cavern. Baravis threw the head into the pool, wanting to make certain there wasn't an evil creature there. The head flew out and Baravis was harshly reprimanded by the fairy spirit of the pool, a nixie named Mara. Casting purify food and drink on the pool as a penance, Baravis gained her good graces. Drog, familiar with the worship of nature spirits and things fairy, charmed the nixie with conversation. Indeed, DJ admitted his character wanted to sleep with Mara, but I told him he's lucky because she could have charmed him and he could have ended up living with her for a hundred years or until she got bored of him.

Anyway, Mara told them about the night-creatures (she called them wood-woses) and said they were the most unseelie of things. Ever since the evil priestess came down into the catacombs, things have been going bad, but the wood-woses avoid Mara's pool.

Judging that it was safe, the PCs decided to rest here. Around the end of the eighth hour, though, a wall of thorns blocked off both exits from Mara's cave. A booming voice demanded, "Who are you and why are you here?"

The PCs identified themselves and their quest. "I am Colderan Morn, Colderan the Razor, Mage-Lord of Daggerdale, Conjuror of the Dark Wood. You have entered my house and slain my servitors!"

"We only seek to help. Your people are suffering because of the Dream Fever and your servitors."

"It is unfortunate, but necessary. I will tell you this once, leave or perish." The PCs protested. The voice repeated, "You will leave my house or you will die here!"

Then... across the table from me, Shaun said it. And everybody just stared at him with dropped jaws. "F--- off!"

Whomever it was wasted no time, immediately casting summon swarm. A boiling surge of rats erupted beneath Sven's feet. Baravis pleaded (successfully) for the caster to stop (which he did, although the spell's duration is concentration +2 rounds). The swarm dispersed eventually, leaving Sven with 0 hp and possibly filth fever. When Baravis mentioned the Brightblade dwarves, the caster's voice grew accusatory.

"You are allied with the dwarves! Treacherous thieves and murderers! They slew my beloved Bellessaria! I will have no truck with their allies!" With that, the voice was gone.

The PCs used one of the vials of alchemist's fire to destroy one of the walls of thorns. They came to an abandoned circle of poisonous mushrooms (destroying 13 of which looked like wood-woses in fetal form), found a passage that descended toward a river, and eventually came to another wall of thorns that blocked further passage. The PCs hacked their way through the wall and came to a locked door with a guardian watchdog. Sven (who had been healed back up to half his hp) befriended the dog with wild empathy (he's now a 1st-level rogue, 1st-level urban ranger). Without thieves tools (they'd been confiscated in Part Four), they couldn't pick the lock, so Drog spent four rounds noisily chopping the door down. They entered a small antechamber with arrowslits and another door. Upon opening the second door, Baravis (who had gone ahead) found himself met with four skeletons.

And that's where we stopped. Play resumes tomorrow night where we will use Maptool on our laptops at the table instead of miniatures. Most play will use pen-and-paper, though. Maptool is simply to help us navigate through the logistics and movement aspects of gaming more quickly than miniatures, but I must admit, it takes a lot longer to set up and prepare adventures and campaigns (at least, at the level of detail I prefer). It has the potential to speed up games quite a bit, and allows for online gaming, but unfortunately, it takes a LOT of prep time.

I really envy you your players! They seem to be RPing some very interesting characters. A suggestion: for future posts you should give a brief description of each character as well as a 2 or 3 sentence summary of the campaign/adventure thus far. I keep going back to your original posts and re-reading (i.e. the other hungover heroes guild posts) but it'd be nice to be brought up to speed in the same post (that is, of course, if you keep logging adventures after this module--something I hope you do!). Thanks for sharing!

No problem, Mr. Carney. I'll give a brief description of the characters next post. We just played an amazing session tonight.

Don't be too envious! I've not been in a decent game that went very long for about 10 years or so. And these guys keep me on my toes! Every time I think they've gotten themselves killed, they pull themselves out of the fire.