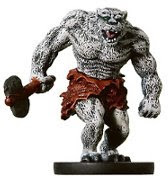 A summary and cast of PCs can be found here, at the beginning of Session 6's AAR.

The PCs decided to take a reconnaissance job for the Twisted Tower. After negotiating the agreement with Thurbal, captain of the guard for the Tower of Ashaba, the PCs commissioned a few new sets of armor and weapons with some of their spoils from Daggerdale.

At midday, they arrived at the Twisted Tower the following day and were escorted through the tower dungeons (where they made offerings at the shrine for Sylune, the Lady of Shadowdale and fallen hero). They were escorted through a few doors and given a key and a parchment with the password to the next door.

They crossed an underground stream via a stone bridge. Baravis used his new spider walk invocation to guide PCs across the bridge. At the next door, they spoke the magic word to unbar the door and the parchment fizzled to ash. They opened the door, avoided a descending ceiling trap, and were attacked by two shaggy humanoid creatures with bastard swords. They dispatched them with ease, then plunged deeper into the dark tunnels. 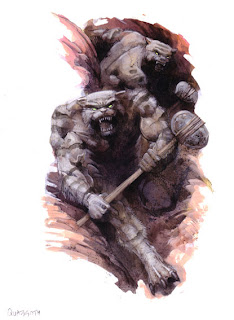 They unraveled an illusory dead-end, found a secret door, and eventually made their way into a twisted series of water-carved tunnels when they heard the sound of voices approaching. When they heard in orcish "We'll find the dwarven wretch, then it's mealtime for everyone!" Baravis cried in dwarven "Over here you coward!"

Around a bend, a half-orc and five shaggy creatures (that looked like a cross between orcs and those things they had fought earlier) came round the bend and a tremendous fight ensued. The PCs made short work of three of the shaggy beasts when the rest retreated. A running fight ensued during which Sven was cut down, but Baravis healed him. (Sven always gets put below 0 hp in battle, the poor guy!) The session ended after the fight and will resume next time in the twisted tunnels.