Meditations on Disappointment: INDIANA JONES AND THE KINGDOM OF THE CRYSTAL SKULL 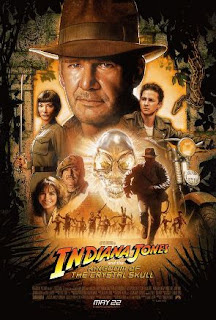 I'm not going to review the film, that's already been done by Mr. Plinkett at Red Letter Media. He did a fantastic job discussing why the film fails to deliver, from its refusal to depict violence to the hair-brained script choices Lucas peer-pressured Spielberg into accepting. What I want to talk about is what I like about the movie.

See, there's actually a lot to like. I know this is hard to explain or understand, but somewhere in there is a really good movie that wanted to be made. However, what came out was a sort of fetal-alchohol-syndrome-cum-crack-baby-film, to use a really politically incorrect metaphor. Indiana Jones and the Kingdom of the Crystal Skull had all the potential in the world but upon delivery what came out was horribly disfigured due to prenatal abuse by its parents. Nevertheless, you can still see the elements of a fantastic Indiana Jones movie in there somewhere.

This movie isn't like the Star Wars prequels, which just sucked. No, in some ways, Indiana Jones and the Kingdom of the Crystal Skull is worse because it actually had potential to be as good as its predecessors. By explaining what was actually good about the movie will illustrate what I mean. 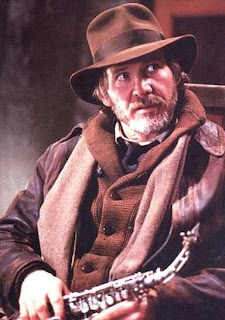 1) 1950s: It seems Mr. Plinkett agrees with me about this--setting the film in the 50s was a great idea. Indiana is older and wiser, not as physically up-to-snuff. In my opinion, he should have made up for his age by being a bit more cunning. Although Plinkett disagrees, I think that having served as a spy for the Allies during World War II makes sense--it isn't too far-fetched that this adventuring World War I veteran would have found a way to be useful to the war effort. Indeed, this could have given him interesting and useful contacts and connections that he hadn't had before.

I have always liked the idea of seeing an older Indy since I first watched Young Indiana Jones and the Mystery of the Blues where the framing story involves Harrison Ford as Indy recounting how he learned to play the blues in Chicago in 1920. It indicated that the character still had fight in him, despite being middle-aged. However, that Indy was a far cry from the henpecked Indy in Kingdom of the Crystal Skull. I wanted to see more of that Indy.

2) McCarthyism: This some people thought was a heavy-handed politically driven soapbox vehicle for anti-right-wing sophistry to be injected into the film. I disagree. Check out Red Scare or Red Menace?, an interesting look into the era of McCarthyism. The existence of KGB-funded communist movements and subversive groups has become a very real part of historical study from that era, especially since a lot of stuff was declassified in Russia within the past twenty years. Yeah, the anti-communism rally was a bit over-the-top, but having Indy get sacked from his school and tailed by the FBI is great for plot development. 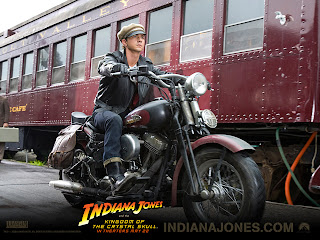 3) Mutt: Indy having a son isn't a bad idea. Maybe having Shia LeBouf play his son was, but I still like how he handled Mutt. Having Mutt be something of a hellraiser is also appropriate--he takes after his father. A rough-and-tumble greaser with a switchblade fits the 1950s well. Having him duel with a Soviet fencing champion, though, is ridiculous. Having him swing from vines is worse. Mutt started out great but ended up lame.

4) Aliens: Roswell. War of the Worlds. Area 51. Invasion of the Body Snatchers. The Day the Earth Stood Still. Forbidden Planet. This Island Earth. The 1950s and 1960s saw the height of science-fiction writing and film pushed further than ever before. Whereas the 1930s saw lots of pulp fiction featuring heroes modeled on Haggard's Alan Quartermain, with adventurers like Robert E. Howard's El Borak, the 1950s pulp was often about little green men from Mars. Having the Soviets chasing the secret of Roswell and Area 51 is actually a perfect idea for an Indy movie. It replaces the supernatural of the Grail, the Ark, and the Thuggi with the mysteries of conspiracy and alien artifacts. Handled well, it could have been awesome. Handled well... . It wasn't. That's the sad thing. I think aliens was a fantastic idea. But the aliens were revealed too soon and there was little or no mystery behind the entire thing. Consider--having the Soviets after some sort of alien technology isn't much different from having the Nazis chasing the Spear of Destiny, the Ark of the Covenant, or the Holy Grail. Having a set of ruins in the middle of nowhere turn into a flying saucer and disappear is over-the-top. Suspension of disbelief dissolves and the audience ends up feeling cheated. 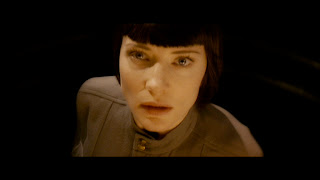 5) Soviets: Yes, they're more morally ambiguous than the Nazis. At least, they were under Khruschev. Not under Stalin. Stalin was evil. Having a hardline Stalinist secret faction trying to get at alien tech to overthrow Khruschev and start World War III isn't so deeply complex for audiences to sit around going "huh?" especially after all the stuff they had to sit through about the Thuggi in Temple of Doom. Soviets and the KGB are great badguys. However, Spielberg (and Lucas) didn't establish these Soviets as villainous by having all of their killing take place off camera. If we watched the U.S. soldiers get graphically massacred at Area 51 in the opening sequence, our sense of violation and outrage would have provided enough dislike for there to be a good payoff when the badguys finally get their comeuppance.

All five of these elements are a recipe for a great (and slightly different, like Temple of Doom) kind of Indy film. It is risky, yes, but done right, it could have been awesome. That's why Kingdom of the Crystal Skull is such a disappointment. There's a good movie in there somewhere. It's just buried beneath bad decisions, poor plotting, and weak characterization.
Posted by Dave Cesarano at 10:21 PM

I think the big problem is, if your going to do an homage to pulp s.f., you need to adhere to those conventions. There needed to be more of an alien presence, more MIB sort of agents, do more with scientists, etc. The aliens seemed to be peripheral to what was going on.

I'll disagree with you there, respectfully of course. The Grail and the Ark were mostly MacGuffins--a reason for Indy to run from and gun down Nazis. The aliens should have served the same purpose, I think. Perhaps more MiB agents wouldn't be bad. But it would have required delicate handling and given Lucas' influence would have ended up just as bad as Shia LeBouf swinging from branches or having a swordfight on a moving vehicle--stupid.

I've recently put out an ebook of my writing, called The New Death and others. It's mostly short stories, with some obvious gamer-interest material. For example I have a story inspired by OD&D elves, as well as poems which retell Robert E Howard's King Kull story The Mirrors of Tuzun Thune and HP Lovecraft's Under the Pyramids.

I was wondering if you'd be interested in doing a review on your blog (either a normal book review, or a review of its suitability as gaming inspiration).

If so, please let me know your email, and what file format is easiest for you, and I'll send you a free copy. You can email me (news@apolitical.info) or reply to this thread.

I'll also link to your review from my blog.