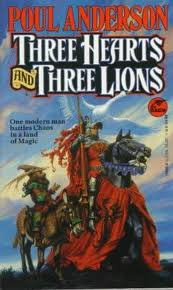 In 1953 a novella was featured in F&SF magazine about a Danish engineer who was knocked out during a battle in World War II against the Germans and awoke to find himself a famous and legendary knight errant in a fantastic version of medieval Europe. It appeared sixteen years after J.R.R. Tolkien had published The Hobbit, and one year before The Fellowship of the Ring. It was later given the full treatment and published as a novel in 1961.

This work is considered highly seminal in the development of 20th century fantasy. It is credited with having had a very heavy impact on E. Gary Gygax and Dave Arneson, designers of role-playing game Dungeons & Dragons, inspiring the character class of paladin, the D&D alignment system (especially the original Law-Chaos dichotomy), and the D&D regenerating troll that can only be killed by fire.

Anderson structures his plot in a manner similar to A Connecticut Yankee in King Arthur's Court, with the man-out-of-time-and-place being whacked into a mythic world. He frames the tale as being related by a third party and acquaintance of Holger Carlsen (the protagonist). This frame only really matters in the very beginning and very ending, and the Holger's friend slips into the role of the typical limited subjective narrator. And much like Hank Morgan, Holger's modern scientific know-how gets him out of a few tight jams and saves both himself and his companions--a dwarf and a swan-may with Scottish accents. 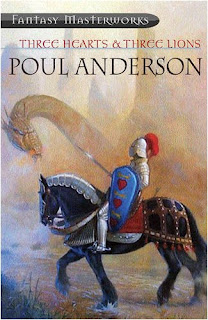 All-in-all, the book isn't terrible, but it isn't amazing. Anderson's prose is, I guess, the Asimovian "clear-as-glass" style that so many modern fantasists and science-fiction writers employ. The overall effect is alright, but nothing to write home about. Holger is a pretty consistent character--his earthly experiences have certainly tainted his view of life and events in the fantasy realm in which he finds himself. He's torn between his earthly pragmatism and scientific skepticism as an engineer, and the faith and religiosity of the crusading knight. I can see how he was Gygax's inspiration for the paladin class (people ask him to lay hands on them, for example), but Holger's "lawful" behavior is a product of his earthly training in scientific methodology, not any sort of theological certainty. Indeed, Holger never struck me as a very faithful and virtuous character--just a man who was trying to get home. His courage and bravery, as well as his moral fiber, aren't the stuff of legend, but much more earthy and practical--this makes Anderson's story quite enjoyable and a tad subversive, but again, I see some strain between Holger's character and the paladin of Gygax and Arneson's D&D. Holger's no saint--he's horny and he is a tad unscrupulous, but overall he's honest and a definite do-gooder.

Anderson's channelling of epic medieval romance is excellent. His portrayal of the elves and fairy, his reminder that iron is anathema to them, and the sense of timelessness and chaotic transistasis that the fair folk inhabit is rendered quite well, and helps to create a wonderful sense of atmosphere. Readers should expect lots of magic, enchantment, monsters, spellbound castles, alluring sorceresses, and lots of other staples of romantic medieval adventure.

The ending, however, is a huge let-down. There's all this buildup, but it really doesn't amount to much. The book reads more like the beginning of a saga, which Anderson simply resolves rather swiftly with a brief, forced, and disappointing summary. There's little payoff, and it all comes off as depressingly anti-climatic. What the book really needed was a cliffhanger ending and a sequel where Holger really comes into his own, but we're never given that. All this development takes place throughout the book, but it leads nowhere in the end. Perhaps we're supposed to feel the lurching displacement that Holger himself feels in the end, but I'm not so certain, and I don't think it really works. 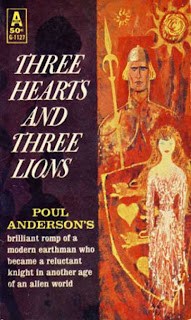 Overall, the book is quite enjoyable. It's not very original, it doesn't exhibit breathtakingly epic prose, and the characters (except for Holger) are not especially deep. It's not an incredible piece of fantasy, but it definitely has some value and deserves to be read at least once. I certainly liked it well enough to recommend it.


Three Hearts and Three Lions by Poul Anderson
Style B-
Substance B-
Overall B-
Posted by Dave Cesarano at 1:25 PM

Good review. I pretty much agree with it in its entirety.

I think Three Hearts is more well known because of its appearance in Appendix N (it's first alphabetically), and the D&D elements you've described.