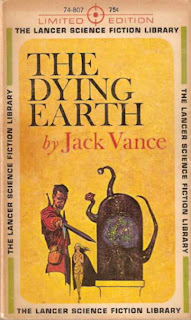 Newton's Second Law of Thermodynamics states that in a closed, isolated system temperature, pressure, and chemical potential will eventually achieve equilibrium. All of the energy tends to even out throughout the system. Sometimes, this is referred to as entropy. When we think of entropy, we usually imagine loss of energy, not necessarily energy equalization. But something is lost when energy is equilibrated. What's lost is vitality, motion. The imbalance of energy permits action, transfer and conversion of energy convey motion and collision. When elements within a system bleed energy off to form that equilibrium, those elements seem to die.

It is this sort of energy death that Jack Vance explores in The Dying Earth. I recently reread my 1960s Lancer SF Library edition of this seminal work of its eponymous genre during school vacation. It's not very long, only 160 pages. Within are six stories set on an unnamed continent in a far, far distant future when the sun has grown dim and the inhabitants of the weary Earth imagine that it will one day gutter and flicker out like an exhausted flame.

Through these tales, Vance explores the theme of innocence--an ironic topic considering the setting is a far distant future where everything is slowly dying. However, through her old age, the Earth has regained a shred of her own innocence, as magic and myth have resurfaced, albeit mixed with science and technology. Vance's language invokes that same sense of the legendary and mythopoeic that Tolkien, Dunsany, and Howard possessed, although instead of dwelling in some mythic past when the world was young, he places his era of legend in a dreamlike future full of nostalgia and misty exoticism.

It was night in white-walled Kaiin, and festival time. Orange lanterns floated in the air, moving as the breeze took them. From the balconies dangled flower chains and cages of blue fireflies. The streets surged with the wine-flushed populace, costumed in a multitude of bizarre modes. Here was a Melantine bargeman, here a warrior of Valdaran's Green Legion, here another of ancient times wearing one of the old helmets. In a little cleared space a garlanded courtesan of the Kauchique littoral danced the Dance of the Fourteen Silken Movements to the music of flutes. In the shadow of a balcony a girl barbarian of East Almery embraced a man blackened and in leather harness as a Deodand of the forest. They were gay, these people of waning Earth, feverishly merry, for infinite night was close at hand, when the red sun should finally flicker and go black. 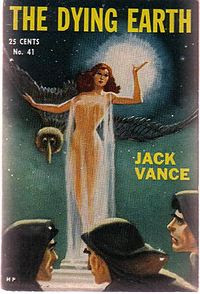 Countries have strange names, such as Kauchique, the Cape of Sad Remembrance, and the Land of the Falling Wall. We read of "orange-haired witches of the Cobalt Mountain; forest sorcerers of Ascolais, white-bearded wizards of the Forlorn Land," and silk-clad princes of "Cansaspara, the city of fallen pylons across the Melantine Gulf." Vance's prose infuses his perpetually twilit world with a sense of storied history.

The ground rose, the trees thinned, and T'sais came out on an illimitable dark expanse. This was Modavna Moor, a place of history, a tract which had borne the tread of many feet and absorbed much blood. At one famous slaughtering, Golickan Kodek the Conqueror had herded here the populations of two great cities, G'Vasan and Bautiku, constricted them in a circle three miles across, gradually pushed them tighter, tighter, tighter, panicked them toward the center within his flapping-armed subhuman cavalry, until at last he had achieved a gigantic squirming mound, half a thousand feet high, a pyramid of screaming flesh. It is said that Golickan Kodek mused ten minutes at his monument, then turned and rode his bounding mount back to the land of Laidenur from whence he had come.

We may only spend a few pages on the Modavna Moor, but that brief description of Golickan Kodek's ride from Laidenur gives the location weight and feeling, and makes it seem a real and actual place. Though Prince Datul Omaet is only mentioned in passing, the fact that he exists, is a sorcerer, and comes from a city of "fallen pylons" from across a sea makes Vance's world just a little bit richer and more fascinating. Vance doesn't flesh everything out with the thoroughness of a Tolkien, but rather keeps his world open and unmapped like Robert E. Howard or Clark Ashton Smith, enabling him to broaden and expand it at will.

Though the setting has great potential for nihilistic pessimism, Vance avoids that. In a sense, the decay and imminent death of the Earth is an opportunity to rediscover a romanticism. Though the Earth cannot be saved from its ultimate fate, maybe it could be spiritually redeemed through heroism, sacrifice, bravery, and intelligence. Indeed, there's a great strain of optimism that runs through the entirety of The Dying Earth and defies the sun's exhaustion. The mythic lyricism of Vance's prose is very much a return to an older form, and though he's not the master that Dunsany or Tolkien would be, he does a decent job of it nonetheless.

"Far in the past, far beyond thought, so the legend runs, a race of just people lived in a land east of the Maurenron Mountains, past the Land of the Falling Wall, by the shores of a great sea. They built a city of spires and low glass domes, and dwelt in great content. These people had no god, and presently they felt the need of one whom they might worship. So they built a lustrous temple of gold, glass, and granite, wide as the Scaum River where it flows through the Valley of Graven Tombs, as long again and higher than the trees of the north. And this race of honest men assembled in the temple, and all flung a mighty prayer, a worshipful invocation, and, so legend has it, a god molded by the will of this people was brought into being, and he was of their attributes, a divinity of utter justice.

"The city at last crumbled, the temple became shards and splinters, the people vanished. But the god still remains, rooted forever to the place where his people worshiped him."

Magic plays an enormous part of the setting--both in its romantic nostalgia and in its entropic decay.

At one time a thousand or more runes, spells, incantations, curses, and sorceries had been known. The reach of Grand Motholam--Ascolais, the Ide of Kauchique, Almery to the South, the Land of the Falling Wall to the East--swarmed with sorcerers of every description, of whom the chief was the Arch-Necromancer Phandaal. A hundred spells Phandaal personally had formulated--though rumor said that demons whispered at his ear when he wrought magic. Ponticella the Pious, then ruler of Grand Motholam, put Phandaal to torment, and after a terrible night, he killed Phandaal and outlawed sorcery throughout the land. The wizards of Grand Motholam fled like beetles under a strong light; the lore was dispersed, and forgotten, until now, at this dim time, with the sun dark, wilderness obscuring Ascolais, and the white city of Kaiin half in ruins, only a few more than a hundred spells remained to the knowledge of man. 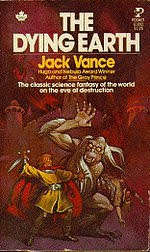 The spells are described as "so cogent" that characters can only fit a limited number of them into their brains at any given time. Upon casting of these spells, the release of magical energy wipes the formulas from the sorcerers' minds. This is exactly what role-playing-gamers describe when discussing "Vancian magic" in games like Dungeons & Dragons. Indeed, E. Gary Gygax and David Arneson were directly influenced by Jack Vance's setting when they were designing D&D, and elected to try to capture the feel of Vance's magical system in their game. This is obviously how Vance's The Dying Earth found its way into Gygax's heavily influential Appendix N.

This interesting mixture of innocence and romanticism amidst decay and entropy is combined with another major theme that runs through his books--justice and redemption. Characters either surrender to their base desires and lusts for power, or they can achieve a sort of moral epiphany and seek to do right. Such characters as T'sais, Turjan of Miir, Etarr, through love, sacrifice, bravery, and loss manage to achieve redemption and have their courage recognized. Other characters, like Liane the Wayfarer and Mazirian, get a satisfying comeuppance. Though Vance's world is dominated by decadence and dark forces, the just, good, and brave can definitely make a positive difference in the world, and Vance's stories are of those exceptional people who manage to overcome obstacles both internal and external. 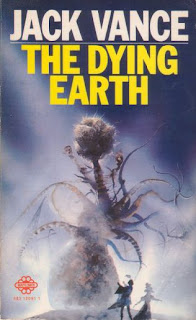 One may say that all of these good deeds are for naught, since the sun is fading and eternal night is immanent, but the tenor and texture of the narratives do not suggest that this was Vance's aim. Rather, the author seems to feel that his protagonists really do matter and that their actions truly have a positive impact in spite of the looming heat-death of the world. Though cities crumble to dust and the sun continues to fade, magic and wonder still persists, and the world can still be enchanted, right up to the very end. 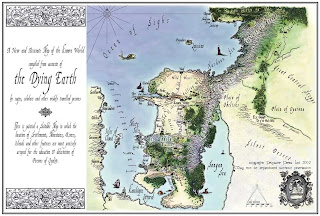 Posted by Dave Cesarano at 9:30 AM

I've got the SFBC collection with all 4 of the dying earth books in it.. I'm really looking forward to reading it..

I've never read past the first volume. Considering I've heard they're not short story collections but more novellas, and two of them were written in the 1980s, I don't know what sort of quality they'll have.

Well having now read the first two volumes in the Omnibus, the first I agree with you on is quite good.. I had a very good time.

The Second I didn't like.. I spent the entire time wanting something very heavy to fall on Cugel.. I don't really like frustrating characters like that.