Book Review -- A FEAST FOR CROWS, by George R.R. Martin 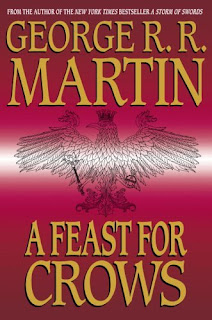 With all this talk about nihilism in fantasy, even Yahtzee Croshaw of Zero Punctuation had something to say about it in a recent video game review. The inexhaustible banter between various sides has actually left me a bit in the lurch, torn between a rollicking good time reading gratuitous sex and violence on a medieval scale and the demands of decent taste. Well, instead of launching forward discussing the state of fantasy fiction any further, I'm taking a break from reading Takami Koushun's teenage slaughterfest Battle Royale to belatedly put down my thoughts on George R.R. Martin's fourth novel in his A Song of Ice and Fire series, A Feast for Crows. (For my earlier reviews of the preceding volumes see A Game of Thrones, A Clash of Kings, and A Storm of Swords).

Understanding why and how this novel was written is key to understanding the novel as a whole. Martin claims to have never really intended to write this novel, nor the upcoming A Dance with Dragons, until he realized that he couldn't simply jam everything he felt needed to be conveyed through flashbacks in the upcoming novels. So, he originally intended to write a single novel to bridge the gap between A Storm of Swords and the fifth book. However, book four ended up becoming so large that he had to split it in half, and so A Feast for Crows is only half the bridge with the upcoming A Dance with Dragons covering all of the character perspectives that weren't covered by book four.

Thus, A Feast for Crows is interesting from the standpoint of character development, but in terms of plot development, we really don't get anything until the end, and that end is more of a setup for events that will take place in book six. Given the length of time between book releases lately, it will be a wonder if Martin will ever finish this series. However, I'm hoping that the sixth novel comes out much quicker, since the bridge part of the story was something that Martin wasn't as interested in telling, but he certainly felt it needed to be told.

And that's pretty much it. The entire book is a setup for the events that will take place either during or after the winter. By the novel's end, winter has begun, and it wouldn't be surprising if things basically slowed to a complete stop. Almost all of the characters have been placed in positions where Martin can easily pick them back up years later down the timeline. A number of very satisfying conclusions have occurred for several characters. But other characters seem to be hanging by a thread and their fates are uncertain. It's not a bad read as books go, and it isn't really filler in a Jordanesque sense, where characters simply sit around plotting and those plots never come to fruition until three 1,000+-page novels have been completed. There's storyline payoff, but those payoffs are weak compared to what Martin could have done.

I don't feel like Martin is stretching his story out on purpose. Instead, I get the impression that he's not certain how to cram everything in that he wants to. We get precious little of the Ironmen storyline, or of Arya Stark's development, with the lion's share of the book going to the Lannisters (Jaime and Cersei) and Brienne. Samwell's thread and the events in Dorne get a pretty fair shake. However, its the brevity with which Martin handles Arya's, Sansa's, and the Greyjoy's storylines that make them so strong and inspiring. It's easy to get sick of the constant plotting and scheming of Cersei Lannister throughout the novel, although Martin does give us a pretty satisfying conclusion to her storyline at the end of the novel. 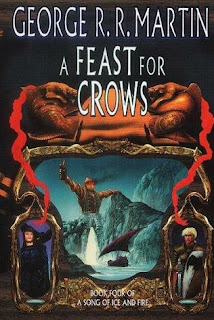 When compared to previous volumes, this one is definitely a bridge, and it feels like it, too. The real situation was wrapped up in A Storm of Swords. In A Feast for Crows, Martin is simply prepping us for whatever happens after A Dance with Dragons. As ever, his characterizations are believable, his grasp of character psychology thorough. There's plenty here to keep a reader going. Seeing how Samwell Tarly, Jaime Lannister, Brienne of Tarth, and Arya Stark all evolve as characters, how they face their individual challenges and quandaries. Sam continues to find inner reserves of strength and bravery, Jaime is forced to deal with the realities of his sister's ambition and ceaseless plotting and struggles with his own ethical and moral compass that is often in conflict with what other men consider honor, Brienne struggles to fulfill the many (and sometimes contradictory) oaths she's made, and Arya begins to detach herself from her past and become something new. These threads are the best parts of the novel.

Martin has, perhaps, given hints as to where, finally, he intends to take this series of his at the end. But a lot remains to be seen. A large number of characters are not to be seen in this novel, but their shadows still loom heavily across the plot's landscape--especially Daenerys Targaryen. I wouldn't suggest that this book is nihilistic as others claim. Oaths and oathbreaking dominate this book, as does plotting and conspiracy. There most heroic characters--Jaime, Brienne, and yes, Sam--struggle with oaths and honor alike. The storylines of Cersei, the Dornish, and Sansa are all hotbeds of intrigue, and Petyr proves himself to be a master politician in contrast to Cersei or the naïve, quasi-heroic intrigues of the Dornish princesses. This book is nowhere near as sluggish and filler-laden as it is reputed to be. Its only in comparison to the previous volumes that A Feast for Crows really seems to be lacking anything.

A Feast for Crows by George R.R. Martin
Style B
Substance B
Overall B 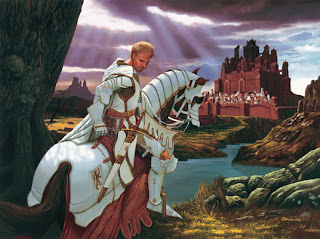 To be honest, my greatest excitement for the release date of A Dance with Dragons is the knowledge that Martin is finishing this "filler" material, and should hopefully be able to move onto the other stuff he wants to work on faster.

I've tried writing or drawing comics with scenes and sections that I'm not excited to tell, and it really is hard to get it done at all, let alone well. So I can understand Martin's trouble.

In the end, though, I felt A Feast For Crows was a bit disappointing. It felt like there was such a cliff hanger, and yet Martin was telling these stories specifically so there would be no flash backs. Unless Feast for Crows and Dance with Dragons aren't side by side and are chronological, then I can't see how his goals could completely come to fruition.

Nevertheless, stuff DID happen here, particularly with Cersei, that it is better (not to mention hints as to the fate of The Hound). So on the whole it is still an important book.

Yeah. And there was some decent events. No, pretty much all the characters are in a place where the most major events for a while. Cersei's predicament can carry on for quite a while if Martin chooses it to. It's good that she's getting her comeuppance.