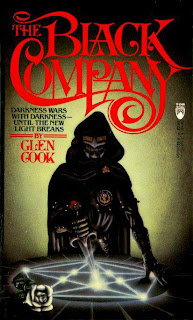 In May of 1984, The Black Company emerged on the fantasy scene, telling the story of a mercenary company with a long legacy from the perspective of that company's historian. The author, a certain Glen Cook, would go on two publish two more novels within the next year, to create a trilogy entitled The Book of the North, a record of the Black Company's exploits on the northern continent of Cook's fantasy world.

Cook's company is a fully realized unit of hardened veterans. His characterizations are accomplished through action and behavior, all of which is observed and relayed by Croaker, the company physician and keeper of the annals. They're a group of misfits, ne'er-do-wells, sellswords, and thugs that are united in a brotherhood of arms and a code of honor.

This sounds rather generic, but it is in Cook's description of the characters' actions and behaviors where the multi-faceted personalities really assume multiple dimensions. Some of the characters get short shrift, such as the Captain, but others are very-much realized, like One-Eye, Goblin, Elmo, and Raven. But the real protagonist of the story is the Black Company itself. The company is a sort of refuge and home for those who would otherwise have no place and belong nowhere. Each character that joins the company fits into the group and belongs there. By creating this company, Cook is creating a kind of brotherhood of soldiers and exploring the camaraderie that develops between the men.

This isn't necessarily unique, as a multitude of novels have been published outside of the fantasy genre that explore these sorts of themes. Where Cook is innovative, however, is with the nature of the Company's moral and ethical dilemma. The opening finds them trapped in a contract that they are bound to fulfill, and honor demands that they complete it. The populace of the city that they are garrisoning resents their occupation and violently take to the streets against them. In order to get out of their contract without breaking it, the Captain signs the proverbial pact with the Devil and commits the company to the service of the Lady--a resurrected sorceress from an earlier age who seeks to rebuild her Domination over the entire northern continent. The Company, apparently, has gotten more than they bargained for, since now they are not only caught within the web of political machinations and backstabbing among the Lady's powerful sorcerer-generals, they also realize that they are on the wrong side of a war--they are fighting for the bad guys.

In this manner, Cook peers into the hearts and souls of those forces whom the average fantasy reader finds him/herself cheering against, and makes us cheer for them. It's a pretty slick subversion of the genre. The characters aren't the wonderful heroes that we are used to in fantasy.

"You who come after me, scribbling these Annals, by now realize that I shy off portraying the whole truth about our band of blackguards. You know they are vicious, violent, and ignorant. They are complete barbarians, living out their cruelest fantasies, their behavior tempered only by the presence of a few decent men. I do not often show that side because these men are my brethren, my family, and I was taught young not to speak ill of kin. The old lessons die hardest."

"I was my usual charming morning self, threatening blood feud with anyone fool enough to disturb my dreams. Not that they didn't deserve disturbing. They were foul. I was doing unspeakable things with a couple of girls that could not have been more than twelve, and making them love it. It's disgusting, the shadows that lurk in my mind."

The protagonist, Croaker, often puts himself up as an example of the sort of decadence and perversion that is common in the Black Company. Yet Croaker's honesty and his guilt are his redemption. He refuses to report on the sins and excesses of his brethren, although he's not afraid to convey his own misdeeds--even those in his dreams. Croaker, at heart, wants to do the right thing, and his own personal struggle--service to a dark sorceress, is inextricably linked with the Company's own ethical dilemma. Croaker is the quiet conscience of the Black Company, the small spark that redeems his fellows not only in the pages of the Annals, but also in his deeds and decisions throughout the book.

Croaker's own struggles embody the struggles of the Company as a whole, and as his connection to the Lady grows throughout the novel, so does the vital role that the Company will play in her plans. They become the focal point for everything, and Croaker becomes a focal point for the plot. When he is faced with the reality that evil is everywhere, it reflects the situation the Company has found itself in.

"'I know you, Annalist. I have opened your soul and peered inside. You fight for me because your company has undertaken a commission it will pursue to the bitter end--because its principal personalities feel its honor was stained in Beryl. And that though most of you think you're serving Evil.

"'Evil is relative, Annalist. You can't hang a sign on it. You can't touch it or taste it or cut it with a sword. Evil depends on where you are standing, pointing your indicting finger. Where you stand now, because of your oath, is opposite the Dominator. For you he is where your Evil lies.'"

Croaker, like the Company, is confronted with a few uncomfortable truths. The real struggle of the novel is whether Croaker can maintain his moral center or if he succumbs to relativism and/or nihilism and simply sides with the lesser evil. Croaker's struggle inside is a microcosm of the struggle of the entire Black Company.

This novel was obviously quite influential on Stephen Erikson's Gardens of the Moon. Indeed, the Bridgeburners of the Malazan Army seem to have been modeled on the Black Company. There's no direct analogy, but naming conventions (Mallet, Hedge, Fiddler, etc. of the Bridgeburners compared to Goblin, Three-fingers, Jolly, Silent, etc. of the Black Company) show definite similarities. These are obviously not birth-names, but names assumed upon enlistment--a kind of eschewing the past along with one's old name in order to begin a new life with the unit.

Cook successfully meditates upon the life of the rank-and-file soldiers of the fantasy antagonist without descending into grandiose levels of angst and pessimism. He handles the ethics of the Black Company and its dilemma with enough finesse and doesn't hammer us with long, winding passages of introspection, keeping Croaker's soliloquies elegantly brief and allowing us to internalize the Company's dilemma more effectively. The worldbuilding isn't incredible, and simply screams "generic medieval fantasy setting" at the top of its lungs. But it isn't worldbuilding we're here for. We're here for the Company--Croaker and his brethren--and their heroism in a war in which they're on the side of evil.

As a side-note, it should be mentioned that the Black Company's name originated with the racial composition of the unit during its formation--the first roster drew almost entirely from the black-skinned natives of the southern continent, and only One-Eye and Tom-Tom (who are wizard-brothers) remain from that levy. The remainder, it is implied are likely dusky or olive-skinned Mediterranean types with dark hair. This is very interesting, because fantasy has always been one of those genres that is extremely ossified when it comes to race. I personally believe that the racial makeup of most fantasy novels is a holdover from older European folk tales and stories, so it would figure that Caucasians would figure so prominently in the tales. But it is interesting to mention that black characters not only made it into this novel, but indeed are more than simply stereotypes (at least so far as One-Eye is concerned).

The Black Company by Glen Cook
Style B
Substance B
Overall B
Posted by Dave Cesarano at 8:42 AM

I think the fact too, that the company, once infected with Ravens decided robin-hoodism, does whats right by the end.. says a lot as well.

The other thing of course is, even though the lady is clearly evil, and that perhaps is why I didn't like the last 6 books in the series.. she's also clearly the lesser evil.. and proves that on a number of occasions...

I liked the first 3 books a lot.. but the rest I doubt I'll ever read again.

I didn't want to give too much away about Raven, but yeah, he definitely had a positive influence on the Company as a whole and Croaker in particular.

I am a little hesitant to read further. I'm not sure I want to. This book was pretty good by itself. I have heard that after The Book of the North the quality goes downhill.

It definitely does, I never recomend anyone continue after the White Rose..

Though if you absolutely are pineing for more Toadkillerdog.. and who isnt? than perhaps read The Silver Spike..

but ignore the rest.. it drags and drags and becomes emotionally wrenching as more and more beloved characters die what amount to pointless deaths.. the worst of which is simply that some of them die from old age and thats perhaps the worst fate for characters like these. Lady's totally sudden personality change in the "Books of the south" is really jarring as well..

Thank you for taking the trouble to write such a thoughtful review. I enjoyed it. I haven't finished The Black Company yet but it's quite captivating.