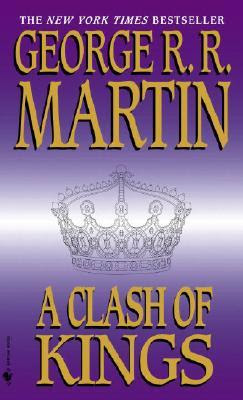 I've felt highly compelled to return to George R.R. Martin's Westeros immediately upon finishing the last book (check my review here). So, without a single moment of pause, I grabbed A Clash of Kings and started digging through it. It was when I was about halfway through it that I realized that I was totally wrong about Martin's multiple-viewpoint approach, among other things.

First, Martin's world-building is second only to Steven Erikson and R. Scott Bakker. And The Alexandrian is right, the world of A Song of Ice and Fire is comparable to an onion, and in this book, a number of layers are peeled back.

Martin's writing style becomes quite clear when compared to the first book. The opening book chronicled the events leading up to the outbreak of dynastic civil war in Westeros, a continent formerly unified approximately three centuries previous by the Targaryen dynasty, dragon-taming refugees from ruined Valyria. Through eight perspectives, it laid the groundwork of actions different characters took that brought the entire continent to war. It also tracked the progress of Daenerys Targaryen and her brother as they sought to rebuild their lost fortunes as exiles. I gave the ending of A Game of Thrones little thought, until I realized how perfectly it set up the opening moves in A Clash of Kings.

Martin's style is essentially to create a situation through which each character must progress--their own plot thread, basically--which resolves at he end of the book. However, this resolution often leaves the character on the precipice of another challenge that will likely develop in the course of the following book. In this manner, Martin is really writing several books in one, tying them together in a single setting, occurring roughly simultaneously. The result is that, while at first blush A Game of Thrones and A Clash of Kings appear very loosely plotted, they are actually extremely tight.

I was also wrong about my comments on character-driven events. In retrospect, I was really reaching for criticisms of A Game of Thrones. Martin's books aren't just character-driven, but the events of the story drive the characters, forcing them to make decisions. A great example (and I won't spoil it for you) is the choice Sandor Clegane makes at the end of A Clash of Kings. It comes as extremely surprising, but it makes perfect sense once you consider the circumstances. Martin is also paying incredibly close attention to his characters, and most authors may forget the psychologies of their characters when they put them into certain situations. Clegane's behavior (his refusal to lead the sortie) and his ultimate decision both make perfect sense when you consider his character's psychology--but it is something we can easily forget, and hence, can come as an unexpected twist. This showcases Martin's incredible strength as a writer, and largely banishes a lot of my doubts that I had at the end of A Game of Thrones.

Martin's world is coherent, and most-importantly, lived-in. His eye for detail really comes to fruition in this book. We get the dirty little inner workings of castles and towns, and we get to see the effects of a medieval chevauchée on the countryside. It is difficult to not compare Martin's work to Tolkien, but one must remember that Tolkien wrote mythologies, not histories (although his myths were coherently presented making them seem historical). Minas Tirith was a city of myth, much like Troy, or the Seven-Gated Thebes of Sophocles, but Martin writes much more down-to-earth and gritty.

Much like A Game of Thrones, the reader shouldn't expect the sort of flowery language and epic tone that Tolkien elicits. Martin, much like his contemporaries, Erikson and Bakker, are writing in a much different time than Tolkien, and it shows. His writing is straightforward, not baroque, delivered in a very matter-of-fact manner. He doesn't waste page space. His descriptions have an air of terse accuracy to them, eschewing a Dickensian turgidity of prose in favor of brevity and action. Martin writes about people doing things, and even when they are sitting around and talking, their conversations aren't meaningless, but drive the book forward.

A Clash of Kings is a massive volume. The US paperback is 1000+ pages long (almost 200 pages longer than A Game of Thrones), but before one would compare it to Robert Jordan, I'd advise that a more accurate comparison would be to Steven Erikson. STUFF HAPPENS in this book. Battles are fought, people are betrayed, entire towns and castles are massacred, people you thought were dead are really alive, religious movements are born, and Martin shoots Chekov's gun repeatedly. There were several points during this book where I almost went into convulsions when I realized that Martin was pulling the trigger on Chekov's gun--he does it and you don't necessarily see it coming, but when you realize the clues were all there, you slap the heel of your palm to your head and find yourself screaming, "THIS IS F---ING AWESOME!" at the top of your lungs.

The characters really come into their own in this volume. I have to say, my favorites are Tyrion Lannister and Arya Stark by far, but I find that I can connect with all of the characters on some level. Some critics of A Game of Thrones complained that a few of the perspectives were from personae that they actively disliked and wanted to skip. At first, during A Game of Thrones, I found myself feeling similar only for Sansa Stark, but the events at the end of the first novel and her experiences throughout A Clash of Kings have softened my opinion of her a bit and I've been able to connect with her much more easily.

Martin's development of his characters is also just as fantastic as his ability to create his world. His characters do not remain static, but transform realistically. For example, Sansa Stark's entire world has been brutally upset and she copes through a mixture of hope and strict adherence to her training as an aristocratic lady. In contrast, her sister Arya develops a keen resourcefulness, cunning, and ability to seize advantage out of every opportunity, despite her youth and inexperience. Martin deepens the internal conflicts of the characters as well, climaxing with Jon Snow's brutal dilemma at the end of the novel. Theon Greyjoy's perspective is introduced, replacing Ned Stark, and giving us insight into his own issues of inadequacy and his desperate need for approval and respect. 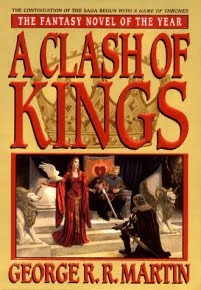 To summarize, briefly, A Clash of Kings is not only a worthy successor to A Game of Thrones, it's better. And it actually puts A Game of Thrones into better perspective, so that the reader can appreciate this series for the absolute genius that it is. Martin's got a firm handle on a very complex story that is probably far more literary than I had previously given it credit for being. It is not the deep exploration of psychology or philosophy that R. Scott Bakker's Prince of Nothing is, nor the allegorical homage to early modern romance that Tad Williams' Memory, Sorrow, and Thorn is, nor is it an epic myth cycle like Tolkien's The Lord of the Rings. If anything, it is Martin's answer to Tolkien and all it's pastiches (David Eddings, Terry Brooks, and yes, even Robert Jordan), and answer grounded in reality, pessimism, and politics.

A Game of Thrones by George R.R. Martin
Style B+
Substance A
Overall A-
Posted by Dave Cesarano at 3:09 PM