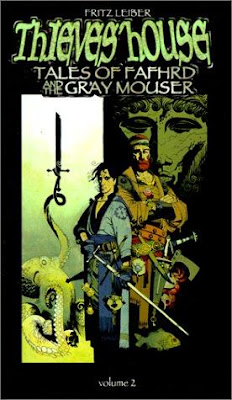 About a month ago, I logged in my review of Lankhmar, the first volume of White Wolf Publishing's Borealis Legends collection of Fritz Leiber stories concerning Fafhrd and the Gray Mouser. That first volume was primarily comprised of origin stories written decades after Leiber originally published "Two Sought Adventure" (now titled "The Jewels in the Forest") and tie-ins.

Thieves' House picks up chronologically where "The Jewels in the Forest" ended in volume 1. It is comprised of most of Swords Against Death and Swords in the Mist, Leiber's earlier (and more well-known) anthologies. The stories themselves vary in quality, but there is very little in the way of tie-ins now that most of the backstory has been dealt with in the first volume. The stories also vary in time of writing, and Leiber's voice changes with them. His prose is more turgidly purple and forced in the later stories (such as 1970's "The Price of Pain-Ease"), although his sense of humor has, by then, developed more keenly. It creates the impression that Leiber might very well be lampooning himself an his characters as one reads through the stories.

The eponymous tale, Thieves' House, is the fifth Fafhrd and the Gray Mouser tale published by Leiber, and opens up this particular volume. Chronologically, the two adventurers find themselves returning to the Thieves' House, although for Leiber in 1943, this was his first foray and it is likely this tale saw editing in order to better fit the author's timeline. As Fafhrd and the Gray Mouser stories go, this is nearly as excellent as the later novella Ill-Met in Lankhmar, and the main reason is because of the Thieves' House itself. Leiber managed to create a labyrinthine setting come to life in less than 40 pages, filling it with secret passages, crypts, and dungeons enough to make the reader want to go in and explore, and then sprinkles a deep, lengthy history of the Thieves' Guild into the setting, spicing it further.

"The Bleak Shore" (1940), Leiber's second publication for the two heroes, wasn't bad but it disappointingly ended just as soon as it was getting good. This story had more of a pot-boiler quality, and the final premise and ultimate villain were both weak. Though the action was well-described, it felt as though it was cut short and would have benefited from a slightly longer and more developed climax.

"The Howling Tower" (1941) is quite nearly as pulpy and good as "The Jewels in the Forest." Leiber touches on some of the darker workings of the inner soul here, examining how fear, hate, and loathing can fuel evil, and how evil begets more evil. Not a profound work, but interesting, still. Sorcery in pulp is simply at its best when it is driven by dark obsession and tragedy, and in that regard, "The Howling Tower" delivers.

"The Sunken Land" (1942) was mediocre. Leiber gropes for a mix of mythical Atlantis and Lovecraft's R'lyeh, but falls short. However, the ending could have been the inspiration for the cloaker in Dungeons & Dragons. The problem here, as with "The Bleak Shore," is simply a problem of development. A Viking longship hell-bent on plundering the riches of lost Atlantis and finding R'lyeh instead is a fantastic idea. But Leiber doesn't develop enough beyond the two roguish protagonists for us to feel anything about the Northerner crew or their fate. Only a few pages are devoted to exploration before the just desserts are served, leaving this story pretty flat at the end. 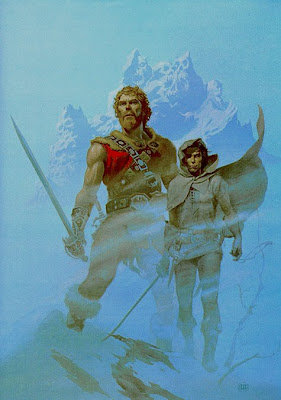 "The Seven Black Priests" (1953) sees Fafhrd and the Gray Mouser wandering through the mountains of the cold north. Fafhrd gets to carry around the idiot ball, but in this case, it's actually a real Mac Guffin. And it doesn't really make him stupid, just... malleable. Lots of combat and near-misses, although, again, Leiber disappoints by not developing the villains enough. The story ends with the reader wanting more.

"Claws in the Night" (1951, originally titled "Dark Vengeance") is a superb example of how Leiber can excel. The story is artfully woven together by the author, who writes a tightly paced tale, full of intrigue, mystery, and suspense. It is a story in which nothing is wasted--Leiber satisfactorily utilizes every single plot element he introduces to assemble a great tale that's excitingly paced. Fafhrd and the Mouser are well-defined by this tale, and both work together and play well off one-another's strengths and weaknesses.

"The Price of Pain-Ease" (1970) comes off as pure filler, much like "The Circle Curse" (1970). We've just been through several stories in which Fafhrd and the Gray Mouser have never once mentioned or dealt with their tragic loss experienced in Ill-Met in Lankhmar. Why Leiber felt it necessary to include this tale is something I don't really understand, but it doesn't really accomplish much for the characters. By now, the reader sees their losses as having shaped their personae and doesn't need the author to come down and fix it for them. So much for the flimsy purpose of the tale, the premise is just far-fetched and poorly executed. What could have been a journey into the underworld (like in Homer's Odyssey or Virgil's Aeneid) was too brief and undeveloped. Fafhrd and the Gray Mouser's "wizard mentors" come off more annoying than helpful.

"Bazaar of the Bizarre" (1963) is actually one of my favorite stories, although the Mouser ends up grabbing the idiot ball halfway through the story and runs with it as hard and fast as he can. And Leiber suddenly bursts out and uses an obscure word at least twice ("coolth"). The tone is nearly Pythonesque, and it is annoying seeing the Mouser and Fafhrd reduced from skilled thieves and cunning rogues (like in "Claws of the Night") to teenage errand-boys for the two wizards. Nevertheless, the idea of such a bazaar is pretty cool, and through the two annoying wizards, Leiber describes who built it, why, and why Fafhrd must destroy it. The combat is exhilarating and the description of the bazaar itself is keen and fascinating (at least, the bazaar the Mouser sees).

"The Cloud of Hate" (1963) was taken from the Swords in the Mist anthology, as was "Lean Times in Lankhmar" (1953). The former was acceptable, although, again, the villain's motivation was unclear, and a lot of questions remained undealt with (such as, how could such a temple, with such a huge congregation, go unnoticed). The Mouser and Fafhrd are the highlight of this piece, as their banter is enjoyable to read and their cunning and resourcefulness makes for a sharp, climactic action sequence.

The latter closes this particular volume on an extremely high note. "Lean Times in Lankhmar" is a long story that takes its time, develops fully, and blossoms into fruition. Leiber punctuates certain passages with purple prose, but the prose is not turgid enough to be grotesque, but rather comical. This story is probably one of Leiber's best. It is also a pretty thinly veiled commentary on religion, but that does not stop it from being a great story with a near-perfect ending. 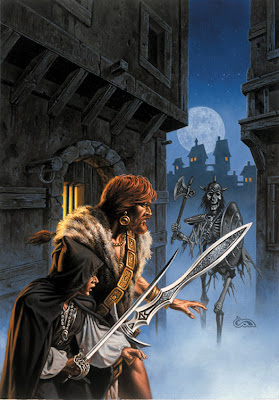 Leiber's characters rarely carry around the idiot ball ("Bazaar of the Bizarre" notwithstanding), although Fafhrd's stubbornness and the Mouser's recklessness and hubris, though not as overwhelming in the previous volume's tie-in stories, are still enough to get them into lots of trouble. They display a resourcefulness and adaptability that keeps them one or two steps ahead of their opponents, and a kind of selfish interest that makes them believable rogues. The overall theme of sadness and loss is not present in this volume, despite the presence of "The Price of Pain-Ease." Leiber's more recent stories are written in a much less serious or adventuresome tone, instead being nearly comical and at times nearly lampooning itself. This detracts from the overall sword & sorcery feel of the book, slipping it into a more lighthearted self-mockery approaching the styles of Terry Pratchett or Douglas Adams.

Leiber's biggest weakness as a writer is that he cuts off more than he can chew with plot premises. This is why stories like "The Sunken Land" and "The Price of Pain-Ease" fail so dismally, especially when contrasted with his well-developed and excellently-paced tales, such as "The Jewels in the Forest," "Snow Women," "Lean Times in Lankhmar," and Ill-Met in Lankhmar. "The Sunken Land," perhaps, should have been expanded and better explored; similarly, "The Price of Pain-Ease" could have provided more internal conflict and eventually peace had it been done differently. When Leiber shines, man does he shine. But when he doesn't, he's lackluster. I got the feeling that many of these stories were simply written for a paycheck because they don't evince the love and attention-to-detail that some of his more well-developed tales. Leiber's a great storyteller, but it seems to be only when he wants to be. The rest of the time, he's an okay storyteller.

What redeems these lackluster stories are the characters themselves. Leiber can write Fafhrd and the Gray Mouser well. By the 1950s, he knows quite well who they are and how they interact, both with one-another and with the world around them. Cagey fighters and lethal swordsmen, there is a reason the Mouser and Fafhrd are two of the most iconic sword & sorcery characters ever to see print. When you read the stories, the two characters get along like old friends and compatriots. They feel real, have conversations with one-another that are believable, and know one-another inside-and-out. Their combat styles dovetail beautifully; Leiber scrawls fight-scenes where the two adventurers are constantly rescuing one-another from danger, deflecting lethal thrusts, and skewering opponents attacking the other's blind-side. Leiber's creations have aged well, I should add. Though I'm much older than I had been when I first read these stories a decade ago, I find them to be just as exciting and interesting today, as I did then, despite the flaws my more trained and literary mind detects.

Thieves' House: Tales of Fafhrd and the Gray Mouser by Fritz Leiber
Style B
Substance B
Overall B
Posted by Dave Cesarano at 2:25 PM