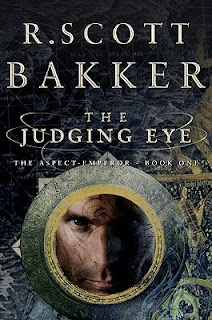 Almost two years ago, I sat in a coffee shop in Fukuoka Japan with a latte and a copy of R. Scott Bakker's The Judging Eye. I finished it there, at that coffee shop close to my hotel. Since the second novel of The Aspect-Emperor series has just been published under the title The White-Luck Warrior, I thought it was time to dust off The Judging Eye and post my thoughts on it. For my reviews of The Prince of Nothing trilogy, which precedes this book, see my reviews of The Darkness that Comes Before and its two sequels.

The first thing I'll say is that this book, though comparable in size to the previous three volumes that made up The Prince of Nothing, felt much shorter than they. Indeed, it felt as if more happened in the preceding volumes. Not to say that much of the book is filler. It is rather well-paced, and Bakker does this by shifting perspectives from chapter-to-chapter (and even within chapters, on occasion). He has three major plot threads in this novel--the Empress and the court intrigues of the New Empire against an ancient cult of a mother-goddess, the Emperor and his Great Ordeal to destroy the Consult, and Drusas Achamian and his search for the origins of Anasûrimbor Kellhus and the location of the secret Dûnyain fortress.

As usual, Bakker's worldbuilding is woven into his narrative and dialogue. The cultures and traditions of the various societies are played out through the tale, rather than described, and the reader finally gets to see glimpses of the mysterious Empire of Zeüm and the Nonmen, beyond distant rumors and passing references. Especially well-rendered are the Sranc hunters that range the north and northeast for Sranc scalps that they sell for the Emperor's bounty.

Interestingly enough, Bakker chooses to employ a (by now) old fantasy trope--the journey through the darkness (cf. the Mines of Moria in The Lord of the Rings or the Hall of Kings in The Sword of Shannara, for example). But it serves more than simply a point of tension--it serves as a journey into the psyche of the Nonmen, the pre-human inhabitants of Eärwa. The journey is into far more than darkness, and it breaks the sanity of most of the characters, who are all renowned Sranc-hunters and hard fighting men. The inclusion of the Judging Eye, the ability to see good, evil, or even damnation in the soul of another, as well as the fanatic mother-goddess cult and their White-Luck Warrior, are imaginative complications to the narrative.

The characters themselves are also superbly rendered. Each has deep psychological foundations that Bakker appears to have mapped out and developed, with each character revealing his own mind and heart through his actions and words. Although sex, sexuality, and sexual frankness of narrative are much more toned-down in The Judging Eye (which I actually appreciate), the gritty realism is still there--characters void their bowels when they die, and others urinate themselves when terrified, for example. But, tactfully, Bakker never lingers on these things. They happen, he moves on.

Unfortunately, the tale itself does not carry that psychological and philosophical experimentation that the previous novels provided. Although he repeats much of the questions that he raised (and perhaps answered) in previous volumes, this volume fails to tread new ground. It is really just more of the same. Unfortunately, when I was finished, though I had thoroughly enjoyed this work, I have to say that I was a bit disappointed. One reviewer posited that Bakker had "possibly...gotten a lot of his musings out of his system with his recent SF stand-alone Neuropath." If that's the case, in my opinion, The Judging Eye is actually weaker for it.

It also didn't have much of a buildup and/or payoff. Achamian's storyline, which featured the aforementioned descent into darkness, experienced a great increase in dramatic and psychological tension, which finally snapped to bring us a satisfying climax and exciting cliffhanger. However, the other two main plot threads really didn't peak in the same way. The plot thickened, but didn't achieve any sort of critical mass or breaking point. Achamian's story is mostly what carries the reader through the ending. 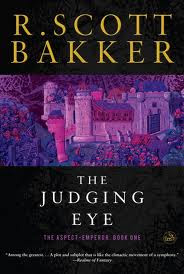 This doesn't mean that the book is not excellent. Indeed, it is very good. As a stand-alone novel, it is fun, intriguing, and thought-provoking; as the afore-mentioned reviewer commented, The Judging Eye is still "by some margin still the most intellectually-stimulating epic fantasy book since, well, The Thousandfold Thought." But in light of the intellectual challenge and progression-of-thought by which the novels comprising The Prince of Nothing were characterized, I couldn't help but be a bit disappointed. I am taking into account the fact that this is the first novel in a series, and the threads left dangling at the end certainly made me anticipate The White-Luck Warrior, which seems to be selling much better than The Judging Eye had. There's a lot of potential here with this series, and perhaps Bakker is just getting warmed up.

The Judging Eye by R. Scott Bakker
Style B+
Substance B+
Overall B+
Posted by Dave Cesarano at 12:33 PM