Book Review -- THE DARKNESS THAT COMES BEFORE 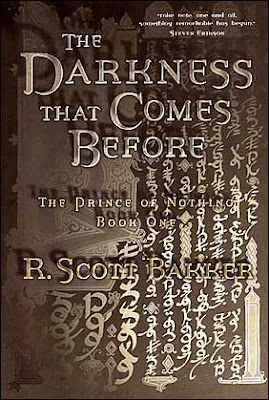 About a year ago, I finished R. Scott Bakker's The Darkness that Comes Before, the first book of his monumental Prince of Nothing trilogy, which itself is the first installment of his Second Apocalypse cycle.

I came across this book at a Barnes & Noble near Christiana, DE, a few years back. I remember lifting the hefty trade paperback, which weighed in at several hundred pages, and was intrigued by the cover blurbs. Stephen Erikson had written, "Something remarkable has begun." Though I hadn't read Erikson, I'd heard about him, and this statement intrigued me somewhat. So, after reading a review of the book, I went to the Gloucester County Library and picked up a copy.
During grad school, I stopped reading fantasy, by-and-large, altogether for a long time. I was too busy working and reading classwork books and such to be able to devote time to anything else. With the exception of Robert E. Howard and some Raymond E. Feist, I had basically shelved fantasy, so it's no surprise that I fell out of touch, somewhat. New names emerged and I found myself becoming more and more intrigued to see where the sudden revolution in fantasy away from the typical "high fantasy" of good guys vs. dark lords Lord of the Rings clones was going. Enter R. Scott Bakker's novel, which I first read some years ago, alongside The Cryptonomicon, but then I have just recently returned to it with the desire to finish the series off.

A sorcerer bound by oaths and nightmares must search for an ancient evil that no one believes in any longer. A nomad warrior-chieftain watches his people disintegrate and strikes out on his own for vengeance. And a lone monk from a reclusive fraternity of philosophers, who can perceive the causes of all circumstances and therefore can be immune to them, is charged with the task of murdering his prodigal father. A religious crusade is brewing between the syncretists and the monotheists.

This book only details the very opening chapters of what will come to be called the Holy War, but it covers them in such a monumental and believable fashion that the reader is swept along. Three disparate threads are inexplicably drawn to the Inrithi crusade against the monotheistic Fanim.

Bakker is a genius at putting old wine into new bottles. There is a deep a 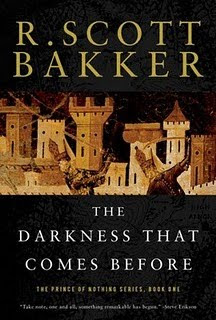 nd abiding evil that threatens to destroy the world, much like in standard epic high fantasy. But what is new is that they've already destroyed the world. The great kingdoms of the Age of Bronze were brought crashing down, and humanity was driven to a corner of the habitable world before the tide was stemmed.

Much like Tad Williams', Bakker's world is full of real-world analogues, but unlike Williams, they are simply inspirations for Bakker's geography, not direct parallels. As such, the Nansur Empire is inspired by the Byzantine Empire, but not wholly analogous. Bakker's knowledge of history, however, gives his world breath and life. It is deeper and more storied, not simply because Bakker devised a history, but rather because Bakker understands history, and how history creates impressions on people. The peoples that populate the nations of the Three Seas are governed by their histories, driven by age-old prejudices, and bound by customs and traditions the causes of which they themselves have forgotten.

What is also quite different from many other fantasy writers is the prevalence of philosophy and psychology in his books. Concepts such as cause-and-effect run throughout the core of the book. One of the main characters, Anasûrimbor Kellhus, is a member of a hidden monastic sect that has repudiated history and the world of men in order to seek perfect control of all circumstance, based on an understanding of what comes before. Essentially, Kellhus' very life is a thought experiment on causality, and through this character, Bakker experiments with the idea of mixing psychology with philosophy. Kellhus can rule others simply by understanding what moves their souls, and because of his training, is quite nearly the Nietzschean superman--impervious to all causality. Whereas others souls are moved, Kellhus moves his own.

Much like the best fantasy series' I've read, Bakker's has a distinct tone and flavor that sets it apart. This is a dark, gritty reality that is much less like how fantasy is often written.
Bakker's work is sexual and psychological. He pulls no punches, and his narrative is frank, honest, and to some may actually be seen as somewhat offensive. Although literary works are not rated or censored, this book graphically illustrates sex and sexuality. However, Bakker does not deliver the descriptions with a cold, clinical explanation, an adolescent excitability, or an erotic narrative. He conveys the sex and sexuality from a perfectly neutral standpoint of a detached narrator. It pushes the boundaries of the tasteful. For plenty, he might very well cross over.

However, this frankness gives his narrative a sense of reality. When slain, bodies release their waste. Indeed, bowels loosen during torture or terror alike. Bakker doesn't mince words. Nor does he waste time. He devotes just enough to this sliver of graphic reality to get the message across, and then he moves on.
The narrative is well-paced and interesting. The events are primarily character-driven, which is quite fitting, since character and characterization are the lynchpins of Bakker's tale. As primary characters have a powerful emperor, his nephew-general, a whore, a nomad barbarian, a sorcerer, a concubine-slave, and a monk to cycle through. Each has a deep psychology and complex personality. Bakker's Dunyain monk, Anasûrimbor Kellhus, is the lens through which the reader can peer into the hidden recesses of each character's psyche. Their strengths, frailties, and ambitions are rendered through action much more than through description, causing them to fairly leap off of the page and into the reader's mind.

Bakker has a great many ideas that he weaves together throughout the book. One can feel the influence of Aristotle, Nie tzsche, Machiavelli, and a host of other thinkers and philosophers upon the world that he creates. The deep richness of its history is present and revealed, piece-by-piece, through the development of the story and the experiences of the characters. There are no scenes in which Gandalf, Belgarath, or Allanon describe the long histories of the world to young Hobbits, in order to explain the rise of the evil darkness. Indeed, these things are revealed only slowly. Who and what the Consult are remain a mystery to the reader, and the threat of a Second Apocalypse is still laughed by most characters as an unlikely bad dream.

Bakker, however, breathes life into more than simply philosophical and religious musings. His concept of sorcery is intrinsically linked to philosophical questions of the fabric of reality. Sorcerers are organized into schools, and they are often at war with one another over power and membership. They are also outlawed by the Tusk, the religious scripture that predates the advent of Men on the continent. They are Marked, as proof of their damnation. And they are divided into Anagogic and Gnostic philosophies (the latter being the most powerful by far). Other ideas that are extremely compelling are the Nonmen, a pre-human race, and the sranc, Bakker's answer to orcs and goblins, which are the horrific abominations of genetic manipulation by the Inchoroi, who remain a mystery.

This is not a book for the average teenager, I hate to say. I look back upon myself and feel as if I would have been unprepared for this work, both intellectually and philosophically. This is most certainly not your average fantasy. Bakker is giving voice to much more than a bunch of jumbled ideas about goblins, dragons, magic, and religion. He's tackling the deepest expressions of both philosophy and psychology. This work is an expression of his research and learning. Good science-fiction/fantasy, no, good speculative fiction, is about developing and executing great ideas. Just as Frank Herbert's Dune Chronicles are about far more than interplanetary warfare, but also ecology, sociology, and religion, R. Scott Bakker's The Darkness that Comes Before is about psychology, philosophy, eschatology, and ethics. 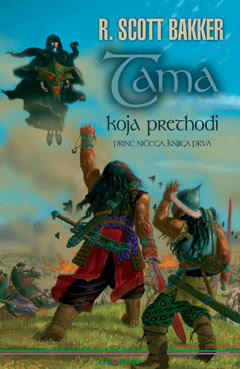 The Darkness that Comes Before, by R. Scott Bakker
Style A
Substance A
Overall A
Posted by Dave Cesarano at 8:53 PM