Foucault and Psychiatry--Comments on MADNESS AND CIVILIZATION

Alright, it's been awfully long in coming. I've finished reading this book a long time ago, and I've finally gotten around to hammering out my thoughts and impressions on this piece of postmodern French thought.

But first, a little background on Michel Foucault. Perhaps the most influential thinker of the late 20th century, it is arguable that Foucault is far more well-known than a nu

mber of other recent thinkers such as Jürgen Habermas, Francis Fukuyama, Eric Hobsbawm, or Jacques Derrida. (NOTE: A pretty funny video regarding Habermas' and Foucault's philosophies in contention can be found here, complete with wickedly-funny "fuck you, Habermas, fuck you" exclamation by the speaker.) The general thrust of Foucault's philosophy is a criticism of modernity. To Foucault, the modern era (post-Enlightenment to be specific) is rife with inequalities and structures of power and oppression that need to be examined critically. In this, Foucault seems to adhere to a general principle that systems of power and oppression are simply a part of the human condition, something I gleaned from his debate with Noam Chomsky.

Foucault first entered the historiographical and philosophical world with Folie et déraison: Histoire de la folie à l'âge classique (titled in English as Madness and Insanity: History of Madness in the Classical Age) in 1961, which earned him his doctorate. He further cemented his influence with Naissance de la Clinique (English: Birth of the Clinic) in 1963 and Les Mots et les choses (English: The Order of Things) in 1966. But it wasn't really until 1975, with the English translation of the epoch-making Surveiller et Punir (English: Discipline and Punish) that Foucault achieved world-wide recognition as a seriously influential philosopher.


Madness and Civilization by Michel Foucault
This volume is an abridged translation of Folie et déraison. Histoire de la folie à l'âge classique, and a full translation has only been 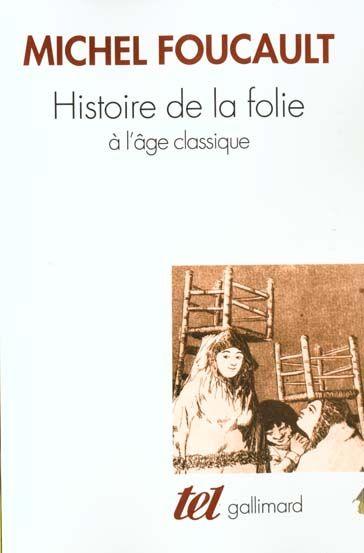 recently published by Routledge in '06 and is prohibitively expensive on Amazon. Thus, I satisfied myself with reading the standard abridged version in English, translated by Richard Howard.

Foucault's writing is extremely dense, even in translation, and is extremely influenced by his own specific jargon that he utilizes throughout the book. Though in later books he would come to edit, develop, or outright reject many of the terms and ideas he uses throughout Madness and Civilization, Foucault's discourse is nevertheless, heavily influenced by these very abstract terms that he never clearly defines. Part of this is because they are still apparently in development in this particular work, and would later come to be clarified in later works. One such term, for example, is "archaeology," which Foucault uses as "a metaphor for 'digging deep' into the underlying rules and assumptions of human sciences" (Windschuttle, 136). Another concept that is not totally formed is that of episteme (which later evolves into discourse and "discursive formation"), which is roughly a time period during which a specific paradigm of knowledge is accepted as the reality of the day. Throughout his work, Foucault behaves as if these paradigms actually do reflect the reality of that period, and are not simply the perceptions of the inhabitants of that particular time.

The book begins with a description of the fanciful "Ship of Fools," that plied the rivers of Europe with its cargo of madmen, and the exclusion of lepers from cities and their incarceration in leprosariums. The book then moves into the Renaissance, in which madness was a reflection of humanity's distance from God, and discusses how the mad were often depicted in literature as somehow possessed of wisdom and knowledge because of their insanity. Then, the Enlightenment hits, and man is defined as inherently rational, with the irrational being defined as other. Since madmen are identified with the irrational, they are defined as other and segregated apart from society.

This is the general development of the book. Foucault moves us throu

gh a variety of historical epochs, each of which possessed a different paradigm regarding reality. In each paradigm, Foucault examines the relationship of the prevailing consciousness with madness and the mad. For example, in one epoch, the relationship between madness and unreason is integral to the treatment of the mad; in another epoch, madness and unreason are not necessarily identified with one-another. In one period, madness is scandalous and must be hidden from society at large, while in another it is on display. In one period, the asylum is a place of separation, in another a place of healing and rehabilitation, and in yet another a place of discipline. The treatment of madness and the understanding of madness also go through a variety of movements throughout Foucault's book, culminating with the enthronement of the psychatric priesthood as a major force in modern society.
The major thrust of his book seems to be that madness was originally understood as a form of knowledge, and that through exclusion, confinement, and institutionalization, this form of knowledge has been repressed by the authorities that the Enlightenment have created. This theme of "repression of knowledge" by Enlightenment authorities is a major theme in much of Foucault's work.

of Foucault's historiography seem to rest on the veracity of his examples for major epistemological movements. For example, Keith Windschuttle (p. 162) describes scholarly attempts to locate an actual Ship of Fools (Foucault depicts it as a wholly real and extant vessel). The timeline of events that Foucault describes is presented by many of his critics as wholly false, such as the absence of any state-led program to incarcerate the insane between 1700-1900 in England (Windschuttle, p. 161). Foucault's supporters, however, point out that Foucault was not only discussing the confinement of the mad, but also orphans, the poor and homeless, and vagabonds. Indeed, Foucault is quite explicit in his equation of the mad with other groups that did not conform to a particular time period's epistemological paradigm. To Foucault, these groups form sources of knowledge that were oppressed and removed from the collective consciousness of an era.
Foucault's work as an achievement of scholarship is to provide a fascinating perspective on the changes in the collective perception of madness throughout the past five centuries. I am loathe to describe these changes as evolutionary, because Foucault seems to view these different periods as completely disconnected from one another. Evolution would imply growth. Foucault describes the transitions through which physicians' understanding of the causes of madness--these transitions at first appear to be evolutionary, i.e. developments in the discourse lead to further developments and gradual change. But this is an illusion. To Foucault, there is no evolutionary relationship between those who understood madness through the imbalance of humors and those who understood it as the texture of different physical fibers in various organs--these periods are completely disconnected and independent of one-another.

And here is where I can't really agree with Foucault. Although I like that he is critical of the Enlightenment, I find the division of time periods into separate epistemes that are completely unrelated to be a complete denial of causality. Perhaps I am far too modern to be post-modern, but I have always, and likely shall always, view historical development as most certainly cause-and-effect related, and therefore each age is dependent upon the previous ages' paradigms and knowledge.

Thus, Foucault's conceptualization of epistemes is inherently politically driven. Each epoch has its dominant form of knowledge and other forms are oppressed. The dominant form of knowledge seems to literally dictate the very shape that reality actually takes for Foucault. Therefore, I have to wonder if Foucault wanted to overthrow the current episteme in order to impose a wholly new form of reality in which the previously oppressed forms of knowledge would become the dominant paradigm. Foucault, as I said, seemed to believe that every episteme possessed its own systems of subjugation and repression, institutions of power and domination, and hierarchies. To Foucault, all hierarchies are predicated upon knowledge. The monopolization of a form of knowledge, especially a dominant one that played a pivotal role in the reality-paradigm, was a key to power, and was the source of various priesthoods such as psychiatrists, doctors, and lawyers--priesthoods that exist today under modern episteme.

In the postmodern episteme that many cultural theorists such as Foucault seem to desire to bring about, the new leftist intellectual serves as a replacement for the hierarchical "right wing" intellectuals of the old, modern, Enlightenment-era paradigm. Therefore, my favorite critique of Foucault's politics is by Keith Windschuttle (p. 142), regarding Foucault's philosophy of challenging the Enlightenment and the modern Western epistemological paradigm:

(Emphasis added by me.) What makes people think that under the new paradigm the oppressed groups will actually find liberation? Perhaps they will be more enfranchised, but in reality, everyone's just traded one priesthood for another, and again, the monopoly of power-knowledge structures continues.

To return specifically to the work under question, however, it is indisputable that Foucault has achieved something important with his work. He's thrown down a very heavy gauntlet and challenged a number of historiographical preconceptions. This is, to me, a positive thing. His scholarship and perspective are incredibly unique, and I very much agree with his tendency to critique the prevailing power-knowledge hierarchies that dominate a time-period. His methods are both fascinating and challenging. I only wish that these techniques would be applied to non-Western societies as well. Confucianism, for example, is screaming to be analyzed just as critically and rigorously, but since it is essentially a non-Western power-knowledge structure and predicated upon a radically different reality-paradigm, it is beyond the interests of the politically motivated post-modern, post-structuralist cultural theorists.

Windschuttle, Keith. The Killing of History: How Literary Critics and Social Theorists are Murdering Our Past. San Francisco: Encounter Books, 1996.
Posted by Dave Cesarano at 3:43 PM

Thank you very much for writing such an interesting article on this topic. This has really made me think and I hope to read more.
best psychiatrists in Los Angeles

It's been several years since I read Madness & Civilisation, so my thoughts may be a bit off, so apologies in advance.

The key point to Foucault for me (reading mainly Madness & Civilisation and Discipline & Punish) is that power is an emergent property of social systems, which shifts from system to system in accordance with changes the power structure. This is entirely not to do with any truth or rationality in the system itself, which is why the presentations given are so distinct. They are not causally connected, but rather through the shifting of power dynamics within any given society. This is also another reason he uses the term "archaeology" (at least, to me), as opposed to "geneaology" - the ideas and structures of particular periods are not causally descended from one another, but rather pieced together by people using cultural artefacts as reference points.

However, the spin I had on it (from my philosophy professors as well as my friends) was that power as an emergent property was not a necessarily malevolent thing that needed overthrowing, just a fact of how society functioned. What would need to happen in such a scheme is for multiple power structures to be able to coexist. Whether this is possible I'm not sure, but it would require the current power-brokers and definers of reality (the same thing) to acquiesce to that change. Not very likely. But, as you point out, it is rather telling that he casts philosophers in this role, which people have done since Plato.