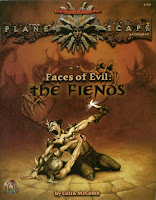 I recently read this review of Faces of Evil: The Fiends, an accessory to the Planescape campaign setting for Second Edition Advanced Dungeons & Dragons, published in 1997. The review is from around 2005, even though the game book it is reviewing is sadly out-of-print, and has been for nearly a decade. You probably won't even find copies of it used at The Dragon's Trove or The Gamers' Realm (although Between Books in Claymont, DE might have a chance at stocking a pricey used copy). It was published only a year or so before Wizards of the Coast took over TSR and imposed a very new design policy upon their products.

I have a copy of Faces of Evil back home in the United States. I had managed to get a copy of it when I bought a used Planescape Boxed Set off of a friend in college. He threw in this book, which I soon read from cover-to-cover about a dozen times in the next few years, just for fun. And although there are lots of bloggers who really dislike a great many developments during the so-called Silver and Bronze Ages of gaming, one of the developments I do not is the growth of highly-detailed established settings. While some might lament this as the decline of DM creativity, I found it to be a source of inspiration.

Faces of Evil is an example of that sort of inspiration. It is a book that I could read just for fun, and not only as a game supplement. I always enjoyed reading the sourcebooks for the established settings much more than the novels. The sourcebooks gave me the opportunity to revisit old memories and just be a kid again traveling through worlds of pure imagination. When I was first introduced to role-playing in middle school, I used to spend summers laying down next to the air-conditioning vent beneath my bedroom window, wedged between my bed and the wall, reading setting material while listening to Nirvana and Pearl Jam CDs and dreaming.

Books like Faces of Evil were never produced by Wizards of the Coast. There were no stats, no feats, no magical spells or items. It was completely bereft of "crunchy bits." It is entirely devoted to running and designing fiends with deep motivations and drives. It is all about the various races of fiends, their goals, characteristics, and psychologies. And I found it to be interesting, insightful, and just plain fun setting material that adds to the depth and dynamism of Planescape (and indeed, any campaign that might feature a fiend or two).

This is quite saddening, because the mighty and vaunted Wizards of the Coast had ten years to put out good setting material for 3.0/.5, and they simply failed. Not since Palladium Books put out a thousand-and-one sourcebooks full of toys for RIFTS, and Pete Overton started his Quality in RIFTS page has there been such a need for a good, hard, and critical look at both an roleplaying system and company.

By looking backward at the past, and comparing it to the present, it is swiftly became apparent that the quality of role-playing material has been drastically diminishing. Yeah, we have beautiful books with great (if unrealistic or inaccurate) artwork, and tons of cool ways to customize your characters, there are simply too many spells, prestige classes, alternative classes (that overpower the core ones), feats, and magic items, making 3.5 D&D the twinked-out munchkin-player's wet dream, but everyone else who is interested in character development and acting in-character is left in the dust chewing sand. Then along came Fourth Edition, with drastic changes to setting material and a system that is rife with disassociated mechanics that make for an unrealistic and non-immersive gaming experience.

These days, without any of the "crunch," a lot of younger gamers might look at a book like Faces of Evil and say, "What a rip-off! There's no weapons, stats, or feats! There's no new items or spells! It's all boring stuff!" I believe its easier to come up with a dozen new feats and spells than it is to detail the psychological motivations for just one unique race of supernatural monsters, let alone many. After reading magnificent books like this, which enriched the settings and inspired me as a DM, the plethora of toy-centric splatbooks issued by Wizards of the Coast were extremely disappointing.

Many OD&D gamers dislike much of the stuff issued by TSR during this era, because they seem to believe it was all about pushing their gaming worlds and selling more books. They might argue that books like Faces of Evil were unnecessary, and that they didn't really enhance the hobby in any way. Why do we need an entire boxed set for Waterdeep when I can just design my own city?

While the OD&D gamers may have a point, I'd like to remind them that they began playing before Waterdeep was anything more than a brief mention in Ed Greenwood's articles in Dungeon and Dragon magazines. When I started playing, Waterdeep was far more fleshed out and realized than anything I could have cobbled together at age 12. It was very much the same for other D&D settings. We could design our own settings, but often, we fell in love with the established ones, and wanted to explore them vicariously through our characters. Thus, for us, books like Faces of Evil helped our games by making the world more real--they inspired the Dungeon Master to broaden and deepen the setting and characters. For me, as a kid, D&D wasn't about a ten-foot pole or pit traps, but about visiting impossible places, exploring strange new lands, and interacting with characters unlike anything we could meet in our average, day-to-day lives.
Posted by Dave Cesarano at 2:01 PM

I pretty much missed the majority of 2nd ed. days, but there was some good stuff thst came out.

I think my entire roleplaying philosophy is heavily influenced by 2nd Edition, plus some healthy doses of White Wolf and Palladium games' stuff. When we first started in 6th grade, it was pretty old school style--rolling 3d6 for stats, seeing characters killed off constantly, crawling through dungeons. But by the time we hit 2nd Edition (and stopped with "Classic D&D") I was 13 or so, and we started doing more story-arc-based gaming; by then we also focused less on dungeon exploration and more on interaction with established settings (travel, intrigue, trading, politics, etc). A lot of that came from the ultra-detailed boxed sets and sourcebooks that TSR started churning out during the late 80s and through the 1990s. A lot of it was junk, but some of it was great.

When I compare it to setting books that exist for 3.X, I'm really disappointed. I remember buying the Waterdeep guide for 3.5 and actually returning it for my money back because it was worthless to me (it was mostly feats, spells, and items with very little setting material compared to the 2nd edition boxed set for the city).