Sir Ken Robinson on Academics and My Thoughts 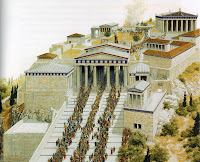 s about how the academic world exists solely to create university professors. As someone who always sought to be a university professor, I actually found myself inhibited by the lack of creativity and imagination I encountered among my peers in college and grad school. For me, history was always an exploration of the world that was, and can only exist again in our minds. This picture of the Athenian Acropolis (left) from Peter Connolly's The Ancient City is far more valuable to me as an image of what was than all of the bland descriptions in textbooks. The picture is the product of imagination. Sure, it's probably not exactly what the Acropolis looked like, but it is better than nothing, and it is much better than letters printed in a book.

I've said before that the education system is a priesthood. The system that exists now is the Ouroboros. University tuition has increased approximately 400% in the past twenty years, while wages/salaries have only increased 80%. This has been coupled with the drastic push in schools to encourage students to take the SAT and enroll in college. Around 25% of all Americans between 22 and 40 have bachelor degrees. Instead of lowering demand, the drastic tuition hikes by universities have made loans an absolute necessity for furthering one's education.

Now link this to Sir Ken Robinson's comments on developments these past five years--that what was once good enough to get a decent job (a bachelor's degree) is no longer enough, and now you need a master's. Jobs that used to be good enough for a master's require a PhD. And now, PhDs are not good enough, you need to have publications and post-doctorate study under your belt. I look at the massive mountain I must climb and start to wonder if I'll ever be able to fulfill my dream of becoming a university professor of ancient history. The mountain I have to climb is ridiculously high, and I honestly cannot afford more loans in order to complete my schooling. Compounded with the fact that many of our university freshmen are being required to take remedial writing and mathematics courses (despite earning high marks on the SATs), and I'm left scratching my head and wondering if I even want to teach history at all.

Perhaps I should try my hand at writing novels instead.

But I digress. The system is most certainly breaking, assuming it is not broken already. The current economic crisis should be coming as a wake-up call, but unfortunately, that does not seem to be the case. The human capacity for denial is staggering.

Sadly, there can be the case of throwing the baby out with the bathwater. Rote, repetitive memorization is key to a lot of learning. For example, when learning living languages, there is no substitute for practice--practical face-to-face communication, especially with native speakers, and lots of it, will inculcate the knowledge viscerally, not cerebrally. When studying dead languages, like ancient Greek or Latin, rote memorization is the only way to learn the parsing of verbs.

Laudo, laudas, laudat, laudamus, laudatis, laudant. Sum, es, est, summus, estis, sunt. That's all there is--memorization is necessary. Studying Greek, I spend more time drilling verb forms than actually reading it. But the time I spend drilling does actually pay dividends. When I read, I find that I read much more easily a text that incorporates the new tenses or moods that I've just memorized, than if I just glance over the new forms, don't drill them for 30 minutes a day for a few days. In the end, the drilling actually makes reading it easier.

Sir Ken Robinson has more to say on the topic of education stifling creativity. Interesting stuff.

Posted by Dave Cesarano at 3:37 PM

Give me a minute... I'll need to download the videos so's I'm not wasting on-line time watching them.

But you do realize they're way behind me on this one, yes?

Oh absolutely. You and I had conversations about this back when I was in Newark.