Two things have really converged today that make being a blogger a bit interesting.  The first is that on June 5, Ray Bradbury passed away.  The other thing is that today, June 6, is the anniversary of the D-Day invasion of Normandy during the Second World War.  Both topics are likely being blogged about all over the internet, but I thought it would be remiss of me to not say at least something.  I've avoided doing this before because everybody is doing it, but this time I figured I'd hop on the bandwagon. 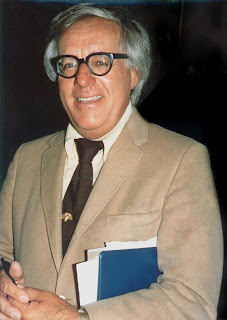 Ray Bradbury
The passing of this giant of science-fiction is honestly quite sad, especially since he was prescient enough to foresee the cultural decline of American society into kitsch and the waning of literary awareness.  I read Fahrenheit 451 back in high school and it struck me how much Bradbury predicted how cultural and moral relativism would generate a malaise of meaninglessness and censorship of literary works (much of which comes out in the "Coda" of the book).  I was reminded of this when I discovered that new editions of Mark Twain's Huckleberry Finn were being published with heavy editing in order to make the work less "offensive."

I've read only a few of his short stories, but I especially remember "All Summer in a Day," dealing with school bullying on a colonized Venus (before we knew about the pressure-cooker atmosphere) because she's the only student to have ever seen the sunlight (since Venus is shrouded in clouds and constant rain).  This makes her "different" and the other children reveal the base, cruel, evil selfishness of human nature--only to discover deep shame and guilt for their actions at the end.  Sadly, what's done is done and they can never undo their behavior.  It's a great story about human nature and was quite moving for me to read as a child who suffered from bullying and ostracism.  Although I was far more angry and missed the real point of the story--that you cannot undo evil--and focused more on the poor girl who ends up being tortured by her peers.

Bradbury is one of those writers who has proven that science-fiction can, indeed, be literature.  He was most prolific during the height of science-fiction writing, during the middle of the 20th century.  That was when the likes of Bradbury, Clarke, and Asimov rubbed shoulders with Heinlein, Sturgeon, Hubbard, and Ellison and others.  They wrote in a world before Star Wars radically altered our perceptions of science-fiction (for good or for ill). 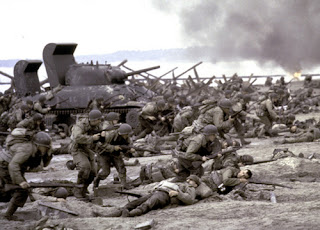 D-Day
On June 5, 1944, as we all should know from school, the Allied invasion of Europe began with paratroop drops and an amphibious landing in Normandy, France.  This was the turning-point in the war against Nazi Germany.  Although Hitler had been steadily losing ground in North Africa and Italy, it wasn't until the French front was opened that the Nazi war machine really began to fall apart.

We've all seen the opening shots of Saving Private Ryan.  Hopefully, we also watched the chronicle of Easy Company in the HBO miniseries Band of Brothers.  Some of us fancy ourselves to have survived the horrors of the war through playing Call of Duty 2 or Medal of Honor: Frontline.  The experience of war can be horrific and harrowing.  Many of our grandparents and great-grandparents (has it been so long?) are still haunted by the memories of those days, when they stormed the beaches, killed and died. 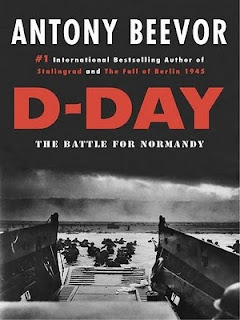 The Normandy landings would see at least 12,000 Allied soldiers dead.  By the conclusion of Operation Overlord, the Allies would have suffered over 225,000 dead and wounded, while the German casualties approach 450,000 by some estimates.  The immense human suffering and destruction of lives brought about by World War II should not be easily forgotten--nor should the lives and deaths of the men who fought against Nazi Germany.

Since I had the pleasure of reading Anthony Beevor's Stalingrad, I have wanted to read some of his other books.  Considering how excellent Stalingrad was, I figured I'd plug his D-Day book, especially since I intend to get around to it within the next year or so.


Interesting note:  I find it interesting that nearly 160,000 men stormed the beaches at Normandy in June of 1944, while (considering my last post) almost the same number of men marched ashore at Busan in May of 1592 to begin the samurai invasion of Korea.
Posted by Dave Cesarano at 5:23 AM

Nice post Dave. Bradbury was my favorite living writer of fiction, so I was of course saddened by the news.

On to WWII: I assume you would recommend Beevor? I've always had a passion for WWII and have read some of the standbys (Rise and Fall of the Third Reich; Flags of our Fathers, With the Old Breed; The Longest Day) and am always looking for something recommended.

Beevor's Stalingrad was excellent (my review is here. I assume he brings the same level of scholarship and elegant narrative to D-Day. Stalingrad came highly recommended to me. Thus, I highly recommend at least Stalingrad. According to my friend, Beevor's book on the fall of Berlin is more depressing than Stalingrad (sieges can always be pretty depressing when starvation and disease hit).