So I'm taking a break from working on lecture notes and my syllabus for HIST316 to talk about a feature of role-playing that I feel is woefully misunderstood by gamers, specifically D&D gamers--the role of religion in an RP setting.

These days, skepticism and postmodern deconstruction have played a powerful role in misinforming people about religion in society.  For example, read any book on Augustus' political maneuverings that involved religion and you'll run across a deeply postmodern viewpoint that the first emperor purposely manipulated religion to bolster his reign.  This gives the reader the sense that Augustus didn't really believe in the religion, but saw it as a method to dupe people into surrendering political authority to him.  Granted, there is no doubt that Augustus was cynical and well-versed in realpolitik.  However, to suggest that he simply saw Roman religion as a means to power-acquisition imposes a skepticism onto his character that is thoroughly modern and somewhat anachronistic.  It is possible he was agnostic enough to see religion as something that could be manipulated, but to think that he actively disbelieved in the gods, did not fear their power over reality, or seek to gain their support is absolutely erroneous and unhistorical. 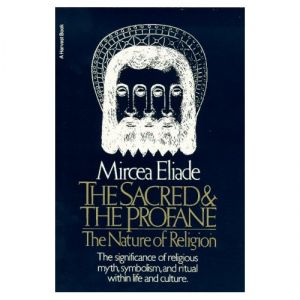 After reading Mircea Eliade's The Sacred and the Profane, as well as numerous works on ancient religion by Walter Burkert, I can't help but shake my head at the woeful understanding of religion's role in pre-Enlightenment societies that gamers have.  Gods exist as plot coupons, granting spells and standing for good or evil but not really playing a viable role in the societies of their settings.  The traditions, the demarcation of the sacred, the rituals and rites, the concept of purity and hallowedness, don't exist.  Holiness or unholiness are simply the side-effects of alignment or alignment-based spells (such as hallow).  There is no real understanding of the relationship between magic and the divine (or metadivine).  Clerics' roles in the gaming world are limited to being healers or buffing stats for player characters.  They don't play a real meaningful role in determining what a society values, how it organizes itself, or how it determines what is virtuous, moral, bad, or evil.

I'm reminded again of the role of Ronald Lacey's character in Flesh + Blood.  There's a phenomenal scene where he sanctifies Martin (Rutger Hauer) as leader through interpreting an omen.  He is instrumental in determining what is good for the group and what must be opposed, all filtered through a powerful religious lens.  In this pre-modern, medieval world that the characters inhabit, heaven and hell are very, very real places, God is omnipresent and always judging, and the priest is His mouthpiece.  Nevermind our modern notions of power and politics; these people really believed because belief was all that they had with which to determine the nature of reality, good and evil, and meaning itself.


Ronald Lacey's militant priest should be one of the models for a D&D cleric.  He commands respect and perhaps even fear.  He has the ear of God and the power to interpret signs and wonders, omens and visions.  He is a link between the invisible realm of Good and Evil and the mundane, drab world of physical reality.  He has power.  Not just spellcasting power.  Power and understanding.  He knows.  And he has the power to purify and sanctify, the power to declare who is good or evil and whom shall be damned.  In effect, he has a finger on the pulse of the afterlife and that scares the shit out of people and demands their respect.  Only another priest can really counter him.


These powers are largely ignored in the D&D worlds.  Clerics form largely a support role.  They are evidence that the gods are real because they cast spells.  Hell, half the time in D&D, the gods manifest themselves in visible and undeniable ways.  Yet D&D religion is largely myth-as-fact and little else.  For example, the D&D 2nd edition The Complete Priest's Handbook advises a DM create a mythic history for the setting.

One of the first things the DM can do to add color and detail to his campaign world is to work up that world's mythic history. Such a history will help establish, in his mind and those of his players, the relationships between the gods, and between gods and men. It will help set the tone of the campaign and the attitude of the player-characters' culture. It will give the players some idea of what their characters expect from their gods and their future. And once it's done, the DM can then elaborate on it and decide how each individual god relates to other gods and to the sentient races of the world.

After that, it gives instructions on how to create gods, their ethical dimensions, alliances and oppositions... and that's it.  It doesn't discuss rites or rituals, traditions, holidays, or deeper philosophical and ethical ideas beyond a cursory sentence or two.  This is profoundly manifest in the Dragonlance setting, in which the gods exist, are divided by alignment, but don't really have any set of traditions.  Their priests don't exist to demarcate the sacred in opposition to the profane or mundane in any sense that Eliade or Burkert describe.  There is no sense that ritual and ceremony re-enact mythical events or bring the celebrants into a sort of communion with their gods.  In a sense, each god's dogma is that of henotheism or monolatry.  There's not a lot of depth there.  There are next-to-no sacred texts (the Disks of Mishakal being the only text mentioned in the Dragonlance Chronicles), no factional splits based on dogma or interpretation, no local rituals or traditions.  The gods are simply there to fight out the whole Good vs. Evil battle.

This deficit makes gaming in the setting easier, but not necessarily more rewarding.  The setting suffers from lack of depth.  Similarly, role-playing also suffers.  A good DM should at least give Eliade's Sacred and Profane a cursory reading, and perhaps to some research into real-world religions, especially Hinduism, Buddhism, Zoroastrianism, and Shinto if their religions are polytheistic, henotheistic, or monolatric.
Posted by Dave Cesarano at 5:43 AM

"HIST316: Covers the history of Rome from the Earliest Republic to its supremacy as Empire, till its collapse in the West under the Barbarian invasions."

Awesome. It's nice that you're going to get this response.

While it may be possible to conclude that Augustus "believed" in some degree in his religion - fundamentally different from the religion of Flesh+Blood - it is less easy with regards to the later emperors, real creeps like Geta and his brother Caracalla, Maximin or Gallienus, not to imagine them twisting the populace with a well-timed reading of the omens. Certainly Constantine was a genius in the design of the catholic faith, wisely grouping together the experts and then isolating and eliminating those who didn't preach ideas commensurate with Constantine's ideal of the state. You must admit that skepticism becomes the order of the day when considering his crowd and the one that followed.

Having Flesh+Blood on my shelf (rarely watched, but happily owned), I concur with all your conclusions; but it is naturally difficult in a non-religious world to convince cynical players of the present century to embrace ideas like that even for gaming purposes. Some of my players refuse to run clerics at all because I do have some expectations in that regard - it takes a special player, one with a sound footing in theology plus the confidence to play it straight to make the kind of cleric both you and I seem to appreciate.

Glad you appreciated the post. And absolutely, a lot of religious manipulation went on during the later Empire. I'd chalk it up to the plethora of mystery cults and eastern faiths that had made religion kind of a confused smorgasbord.

It's not just the cleric players but also the other players that need to embrace the idea of religion in a game. The cleric in Flesh + Blood just runs the one guy through, justifying his murder with the slain man's lack of faith. And everybody just accepted it.

As a DM I try to make religion feel real. Skeptical or atheist PCs are going to find themselves in a lot of social and metaphysical trouble in my games. On the other hand, PCs that have prayed, sacrificed to the gods, burned candles, given votive offerings, and other actions that honored the gods would benefit from them. I don't rely on deus ex machina to get them out of situations--rather, I kind of let the gods give them a slight boost. Sometimes, its a secret +1 to a very important roll. Sometimes, they just happen to run across an ally. Their level of devotion, sacrifice, and piety is matched by the amount of help the gods give. However, it is still up to them to make the best use of the advantages I give them.