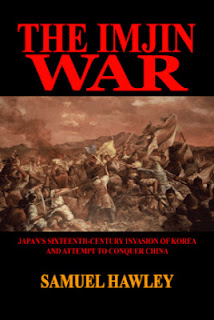 In 1592, the Year of the Water Dragon (임진), a force of nearly 160,000 men landed in Busan harbor, swiftly overran the citadel, and proceeded to march north through the Korean peninsula intending to carve a bloody path of carnage to Beijing.  They had been dispatched by the 太閤 (Taiko), 豊臣 秀吉 (Toyotomi Hideyoshi), who had united Japan under his personal charisma and generalship, to conquer 明朝 (Ming China) and if 조선국 (Choson Korea) stood in their way, then they would be destroyed.  The next seven years would see Ming China nearly bankrupted, Choson Korea ravaged with war and its attendant plagues and droughts, and Japan bleeding manpower and capital into the Taiko's impossible vanity project.  The result would be a legacy of ruined relations between China and Korea on the one hand and Japan on the other.  Japan would benefit from importing advanced pottery and other industrial techniques from Korea, but the human cost was incredibly high.  Choson Korea would come to understand the incredible power of firearms in warfare, but the cost for them was even higher--for decades their economy, which was mostly based on agriculture, would be a shambles and the Choson dynasty would never again reach the cultural heights that their ancestors had enjoyed.

The Koreans had no idea what they were in for.  The Japanese had just ended a century-and-a-half of internal struggle between rival 大名 (daimyo) as the 足利幕府 (Ashikaga Shogunate) proved to be impotent after the 応仁の乱 (Onin War, 1467-77).  When firearms were introduced halfway through this Period of Warring States, 戦国時代 (Sengoku Jidai), they revolutionized how the Japanese fought wars.  Massed units of peasant-conscripts armed with muskets could devastate a samurai cavalry charge.  The Japanese became very experienced in military affairs, logistics, siege engineering, and the use of hand-held firearms.  When they landed in Korea, the disorganized, poorly-trained (and often poorly led) Korean forces were completely massacred.

The Japanese, however, proved to have over-extended themselves.  When military mastermind--and possibly the greatest admiral in human history, greater even than Britain's famed Nelson--이순신 (Yi Sun-shin) led a series of campaigns against the Japanese navy, he successfully cut the supply-lines from Japan.  Food became scarce in a war-torn Korea, and starvation became a real problem.  When the Ming forces intervened against the Japanese, it became apparent that conquest of Korea, let alone Ming China, was well beyond Toyotomi Hideyoshi's reach.  In retaliation, the aging tyrant ordered his forces in Japan conduct a devastating sequence of punitive expeditions throughout southern Korea before retreating home. 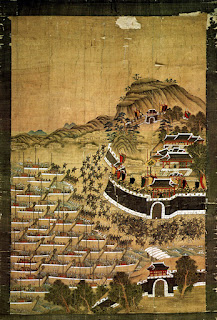 Samuel Hawley's narrative of the conflict, entitled The Imjin War: Japan's Sixteenth Century Invasion of Korea and Attempt to Conquer China, is a tale of tragedy and human suffering brought about by one aloof and tyrannical man of great hubris.  He endeavors to examine the seven years of warfare in Korea between the Choson dynasty, Ming Chinese, and Japanese samurai from a variety of standpoints.  In doing so, he delves into Chinese, Japanese, and Korean accounts of the war, as well as personal correspondence and political documents in an attempt to engage the events on the personal level.  What unravels is a multifaceted chronicle of human experience.  The conduct of the war and the accounts of battles are coupled with excerpts from edicts, letters, and descriptions of the backroom politics, intrigue, and byzantine treachery that plagued both international negotiations and the bureaucratic maze of the Choson royal administration.

It's important to compare Hawley's work with Stephen Turnbull's publications on the war, the 2002 Samurai Invasion: Japan's Korean War 1592-1598, by Cassell Military histories and 2008's The Samurai Invasions of Korea, 1592-1598, by Osprey.  Turnbull is far more focused on the military maneuvers and less with the politics or the human dimensions of the conflict.  These elements are not given the same attention to detail as Hawley's massive narrative.  Turnbull's research is mostly drawn from Japanese sources, occasionally from Korean sources, and rarely (if ever) from Chinese.  In comparison, Hawley's work is far more scholarly, with extensive endnotes and a large bibliography.  Where Turnbull shines is in the detailed maps and illustrations throughout his books.  Hawley's work sports a number of black-and-white plates that are extremely well-chosen, but lack the luster of the full-color illustrations in Turnbull's publications.  I found myself constantly thumbing through Turnbull's many Osprey publications to help visualize the Choson, Ming, and Japanese forces.  Imagining the Korean landscape was easy--I spent three years teaching English in Korea--however, since many of the fortifications have been destroyed by time, war, and urban development Turnbull's maps of sieges and his Japanese Castles in Korea: 1592-1598 for Osprey Publishing were invaluable companions to Hawley's scholarship.

Hawley supplies his own interpretation of the various political and military developments that emerge through the course of the Imjin War.  He discusses the importance of Yi Sun-Shin's excellent admiralship against the Japanese navy, it's impact on the war and how it strained the Japanese supply-lines through into and throughout the peninsula.  He also notes the influence of guerrilla and warrior-monk units against the Japanese and the complex politics and personal agendas of Chinese generals and bureaucrats.  Surveys of Japan, China, and Korea before and after the war are provided to give context and background to the events.  Most impressively, Hawley frankly discusses the difficulties involved in discussing East Asian history, where historical fact can (and often is) manipulated and subverted by politics and yellow journalism.

Unfortunately, his book is very light on deep historical analysis and insight and is, according to Kenneth Swope, riddled with errors both major and minor.  I don't know enough about these events in detail to be able to judge the depth and breadth of the errors in his narrative.  Hawley's bibliography, while more comprehensive than Turnbull's, relies a bit too much on translations and doesn't delve deeply enough into original and untranslated sources.  Translations are often problematic and Hawley's book is susceptible to error creep from over-reliance on these.  Hawley appears to have a thorough grasp of Korean language sources and research, but lacks in the Japanese and Chinese languages.  He doesn't approach the immense depth of, say, Anthony Beevor's explorations of major Second World War battles.  However, Hawley's book is much more approachable for the lay-person and a very thorough introduction to this fascinating conflict than some of the more scholarly and obscure analyses that might surface in an academic library.

Overall, Samuel Hawley's account of the Imjin War will probably remain the definitive volume for a long time.  It's a deep shame that more Western historians do not research and publish more narratives and examinations of East Asian history with such attention to detail and thoroughness of scholarship.  It is also a deep shame that Hawley's Imjin War received such a limited publication run.  I was fortunate enough to purchase it for ₩45,000 (approximately $38) at Youngkwang Books in Busan.  Amazon has it used for around $150 in the States.  My copy, a second edition, was printed and bound by Samwha Publishing in South Korea.  It's not readily available overseas, unfortunately.  Nevertheless, it is absolutely indispensable for the student of Korean history, feudal Japanese studies, or those researching the decline of the Ming Dynasty.

NOTE:  I'm very keenly interested in reading a copy of Kenneth Swope's A Dragon's Head and a Serpent's Tail: Ming China and the First Great East Asian War, 1592-1598, just to be able to compare it's scholarship with Hawley and Turnbull.  Swope reviewed Hawley's book a bit unfavorably on Amazon's website.  I don't know if his review is justified, seeing as there is precious little in the way of actual scholarship in the West regarding the Imjin War.  Since Swope's book could be considered competition, his review must be viewed with a jaundiced eye.
Posted by Dave Cesarano at 1:49 AM