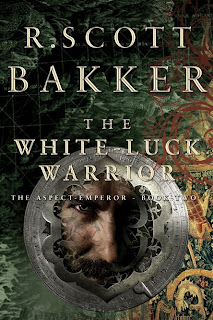 This oft-repeated phrase that Bakker likes to flog during epic battle scenes describes a lot of what happens in The White-Luck Warrior. After more than a month away from keyboard, I return with this latest installment of R. Scott Bakker's The Second Apocalypse epic cycle. The previous trilogy, The Prince of Nothing, I've reviewed here and here, and the first novel of his ongoing The Aspect-Emperor trilogy is reviewed here.

Bakker's novel is an excellent second act, in a trilogy which is, itself, the second act of a larger cycle. True to the three-act structure, the main characters--Esmenet, Achamian, Mimara, and Sorweel--find themselves in ever worsening situations. All attempts to take action are met with disaster. Esmenet watches as control of the New Empire starts slipping from her grasp. Achamian's journey to Sauglish turns into a deathmarch through wilderness with decimated, untrustworthy, and companions that appear to be gradually losing their sanity. Sorweel finds himself a pawn caught between the goddess Yatwer and the Aspect-Emperor himself as he marches through sranc-infested plains towards the Great Ordeal's objective. And in the midst of all of this, Yatwer's chose, the White-Luck Warrior, strides--a man for whom necessity and circumstance are inexplicably merged.

Bakker's writing is quite cinematic. It's easy to imagine the great, dusty vistas of the Istyuli Plains stretching out in widescreen, with hundreds of thousands of armed and armored warriors, flapping banners of a thousand colors, marching across the camera's view, reminiscent of films like Spartacus, Lawrence of Arabia, or The Ten Commandments. You can imagine it being directed by Stanley Kubrick or Cecil B. DeMille with a cast of thousands. The climax of the book is extremely exciting, and easily lives up to the dramatic and terrifying end of The Judging Eye. Achamian and Cleric are an impressive combination and sparks seem to leap from the pages in which they interact (pun not intended--wait until you reach the end and you'll see what I mean). The bitter and ambiguous ending awaiting Achamian invokes (at least in me) the ending of Planet of the Apes, where Achamian discovers something that we, the audience, have known (or at least suspected) all along.

I don't have a great deal new to say about Bakker's style, philosophy, or grasp of history. I've said much already about how this world appears to be a thought-experiment for philosophical, religious, and gender-related issues. Both Mimara and Esmenet show immense strength of character and will. The abuses they'd suffered at the hands of men has not made them hateful or bitter, but something much different. They're survivors and Bakker demonstrates their determination not to succumb through their flexibility and ingenuity. Granted, neither character is perfect, but they're no more flawed (and in some cases, they're less so) than any of the male characters, such as Achamian and Sorweel.

One of the biggest criticisms that many readers have with Bakker is that his characters are almost universally unlikeable. To this, I must disagree. Bakker's characters are far more realistic than many of their other fantasy companions. His grasp of psychology helps him create characters that actually breathe and exude humanness. Their flaws, sufferings, idiosyncrasies are all believable and make them far more real than the over-romanticized two-dimensional heroes and heroines of many a fantasy novel. Indeed, perhaps the most obvious proof of Bakker's literary achievement is the ambiguity of Kellhus' role in this entire series. Is he noble and altruistic in his mission to destroy the Consult and the remaining Inchoroi? Is he truly a power-maddened megalomaniac? Is he something else? Bakker leaves this open for interpretation and if you ask different readers, they'll all give you different answers for what ultimately drives Anasûrimbor Kellhus. He's a different character to each reader, so much so that I believe readers are finding pieces of themselves in Kellhus every time they consider him.

In terms of plot, I must say that this book surpasses The Judging Eye. There were several points where I thought I could see what was coming but had guessed slightly wrong just enough to be surprised. It's incredible watching Bakker develop his characters. They grow, adapt, and change throughout the book. The challenges and difficulties they face, many of which are beyond their control or exacerbated by their actions, force them to evolve. Here Bakker's grasp of psychology shines through brilliantly as it had in The Warrior-Prophet and The Thousandfold Thought. Indeed, Esmenet gradually learns some of the most rudimentary techniques of the Dûnyain simply through the lessons she's had from her husband. She gradually comes to perceive the things that move the souls of those around her. Kelmomas' meddling comes to bite him quite severely, and for the first time his brilliance and conniving is met with dire consequences.

As usual, Bakker's worldbuilding is superb and consistent with his ideas and philosophical musings. History is a leash that all the characters wear about their necks, and Bakker's world is steeped in history and ruin. Having studied ancient civilizations myself, I've seen videos and photographs of places like Mycenae, Tiryns, Ephesus, Rome, Athens, and more. As Kellhus' Great Ordeal marches through the ruined north and Achamian makes his way to Sauglish, I find Bakker describing the sorts of worn and half-buried cities and fortresses about which I'd read and studied in college and grad school. Bakker's descriptions of these places are excellent and evoke the sense of unfathomable age and lost splendor that must accompany such ancient ruins.

Ragged patches of sunshine waved across the forest floor. Birdsong chirped and chattered through the canopy, light and inexhaustible. Here and there sections of wall rose from mounds like teeth from earthen gums. Layers of stonework ribbed the ravines they crossed. Blocks and fragments of every description stumped the ground. They passed a free-standing triumphal, the first thing Achamian clearly recognized from his Dreams: the Murussar, the symbolic bastion that marked the entrance to Sauglish's outlander quarter. Stripped of its inscriptions and engravings, it towered into the canopy, stone blackened, chapped with white lichens, shelved with moss. He need only blink to see the crowds bustling about its marble base: their garb ancient, their arms and armour bronze--men culled from all nations, from wild Aörsi to distant Kyraneas. 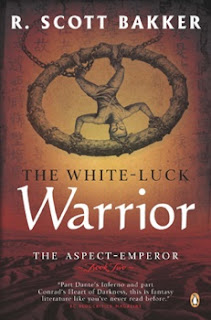 At this point, there isn't much analysis I can do since the trilogy is unfinished. Most of the analysis I've done already for The Prince of Nothing is quite similar to what I'm seeing in this series, although Bakker is doing some new things with it. However, I don't want to give anything about the story away, except to say that the ending is just as much an homage to Tolkien's The Hobbit as the climax of The Judging Eye was to The Fellowship of the Ring's Moria segments.

All told, The White-Luck Warrior is a fantastic installment in an already amazing series of novels. The philosophy is broadened only a little but the psychological character exploration and evolution is solid and the plot is absorbing.

The White-Luck Warrior by R. Scott Bakker
Style B+
Substance A
Overall A-