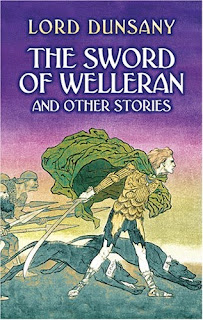 It's been almost a month since my last review, but I've not been idle. I simply haven't been in the proper position to give a well-thought-out review of any of the material I've read in the past two months. I've had a lot of personal issues through which I've had to work and a lot of difficult choices I've had to make. However, I've the next two weeks off for winter vacation and intend to use those two weeks to get some more reading done and to bring my blog up-to-date on my reviews. Thus, I'd like to inaugurate this new year (belatedly) with a review of Lord Dunsany's The Sword of Welleran and Other Stories.

Edward J.M.D. Plunkett, the 18th Lord Dunsany, was an Irish fantasist who, in 1905, published The Gods of Pegāna, a collection of short stories set in a fantasy world. This collection would come to heavily influence J.R.R. Tolkien, among other authors. I should also comment that Dunsany was one of those authors cited by E. Gary Gygax as an inspiration for Dungeons & Dragons in the oft-cited "Appendix N" of the 1st Edition AD&D Dungeon Master's Guide.

It's not difficult to see why Dunsany is such a heavy influence. His stories 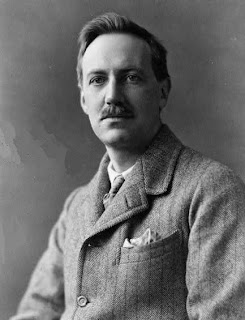 alternate between the mythic, the idyllic, and the nostalgically romantic. I've not read his earlier writings, such as The Gods of Pegāna, or any of his later works, such as 1912's The Book of Wonder, though it's reported to be far more nostalgically wistful.

The Sword of Welleran and Other Stories is infused with a sense of bittersweetness, a sort of pathos that the Japanese call 物の哀れ (mono no aware), a kind of empathy for things passing and ephemeral. It is this sense of passing that permeates all of the stories in this collection, and resurfaces in Tolkien's writings as the passing of all things fantastic and elven from Middle-Earth.

A great example can be found within the first, eponymous story in the volume, "The Sword of Welleran."

And now that the ardour of battle had passed away, the spirits of Merimna's people began to gloom a little, like their leader's, with their fatigue and with the cold of the morning; and they looked at the sword of Welleran in Rold's hand and said: "Not anymore, not any more for ever will Welleran now return, for his sword is in the hand of another. Now we know indeed that he is dead. O Welleran, thou wast our sun and moon and all our stars. Now is the sun fallen down and the moon broken, and all the stars are scattered as the diamonds of a necklace that is snapped off one who is slain by violence."

Thus wept the people of Merimna in the hour of their great victory, for men have strange moods, while beside them their old inviolate city slumbered safe. But back from the ramparts and beyond the mountains and over the lands that they had conquered of old, beyond the world and back again to Paradise went the souls of Welleran, Soorenard, Mommolek, Rollory, Akanax, and young Iraine.

These final paragraphs of the eponymous tale illustrate some of that lacrimae rerum that infuses nearly ever tale in this collection. In the moment of their victory, the citizens of Merimna have saved their city from destruction, but at the cost of their legendary heroes. They knew that those heroes would now never return to them, and though they had a new hero among them, Rold, they still wept for those heroes that they knew were forever gone.

Dunsany's pacing and the rhythm of his prose evoke the same archaic or mythic nostalgia as Tolkien would later do. When coupled with S.H. Sime's illustrations, the overall effect is incredibly powerful. The collaboration between the author and the illustrator, in this case, was incredible. Sime gives a form as mythical to Dunsany's words as the words themselves, especially for such stories as "The Fall of Babbulkund," "The Ghosts," and "The Fortress Unvanquishable, Save for Sacnoth."

The kinds of stories that Dunsany wrote varied throughout the volume. There are elements of fantasy that permeate all of the tales, and indeed, some of these tales are likely to be set in Pegāna, although many take place in the England and Ireland of our world. Specifically, the fantastic, mythic tales are "The Sword of Welleran," "The Fall of Babbulkund," and "The Fortress Unvanquishable, Save for Sacnoth." These are, generally, the most straightforward of the stories. "The Sword of Welleran" and "The Fortress Unvanquishable" are both tales of mythic heroism against overwhelming opposition with the aid of talismanic swords. "The Fall of Babbulkund," however, tells of an impossible city of incredible glory that is the jewel of all the world, and the travelers who seek to find it, only to discover its ruins. The description of the city that the travelers hear only whets their appetite further as they journey toward it, and each time it is described by someone fleeing the doom that will inevitably fall upon it for its decadence and excess.

"The Kith of the Elf-Folk" is the third story in the collection, and perhaps the saddest. It concerns an elf who desires to sing in a church and worship God, but to do so it would have to become mortal and acquire a soul. However, human life is one of pain and suffering, and the elf soon comes to regret its decision, and desires to rid itself of its soul so that it might return to its idyllic state. This story is laden with social commentary, especially regarding industrialism and wealth. Yet it is always viewed through the eyes of the elf who only partially understands its experience in the modern mortal world.

"The Ghosts" is another extremely interesting tale to consider. Modern rationality is pitted against the supernatural. Dunsany places a skeptical gentleman of learning in a haunted place with only his logic and reason to protect him against the malevolence of the spirits there. The conflict is resolved in favor of reason and cold, unfaltering logic--the province of mortal, living men. But the victory is as soulless and discomfiting as the haunt of the poltergeists.

The remaining pieces are also quite interesting, but easier to assess (often due to their shortness of length). "The Highwaymen" is a meditation on honor among thieves and the bonds of friendship and loyalty, even among reprehensible miscreants. "In the Twilight" describes a near-death experience and the revelation of the passage of time and distance when compared to the smallness of the human experience. "The Whirlpool" is an extended boast and warning by a powerful water-spirit and maelstrom, with a rather profound concluding sentence that demands deep consideration. Likewise, "The Hurricane" is a brief, two-page discussion between natural forces that ends with the heartbreak of one. "The Lord of Cities" regards the debate between different natural features in a sort of Aesopian tale, ending with the spider's triumph. "The Doom of La Traviata" illustrates the afterlife of a licentious courtesan. Finally, "On the Dry Land" is a very unhappy allegory of the kindness of death and the cruelty of love.

I cannot emphasize strongly enough the sense of lacrimae rerum that flows through all of these stories--some far more strongly than others. This entire volume seems to be one great meditation by Dunsany on the themes of loss and the bittersweet. He approaches this sense of loss from a much more natural standpoint than someone like Hemingway. Indeed, Hemingway's sense of loss was always personal, but Dunsany's loss is something else. He seems to view the world as growing less magical and more mundane--a theme that, as I wrote earlier, would resurface in Tolkien's work in force.

I can't really do this work much justice in the space that I have here on this blog. But there is a great deal among all of these stories to analyze. Each one is a different meditation that shares many of the same themes as the others, but is unique in its specific subject matter. And when I say unique, I certainly mean so. The subjects are all very different--ghosts and the rational, mythical cities being toppled, an allegory about love and death, an elf desirous of mortality so it can worship God, an unconquerable fortress, etc. To each, Dunsany applies similar themes, and this gives the stories far greater meaning. Man is mortal and temporary, but that mortality is juxtaposed against the passage of myth and magic with the advance of the modern, the industrial, and the coldly rational--all things that are within the domain of Man. Dunsany wrestles with this dichotomy as a good romanticist should. 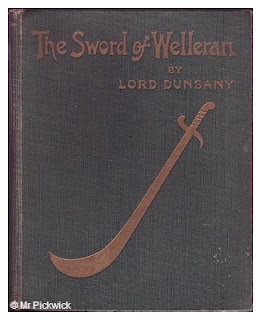 Posted by Dave Cesarano at 4:06 PM

Excellent review. Dunsany's themes do resurface in Tolkien's works, and I find the theme of loss a compelling one. As you said his works are not just a paean for heroes: The Sword of Welleran for example celebrates heroism while also serving as a warning not to over-romaticize the way of the sword.

Thanks, Brian! I'm glad you enjoyed the review.