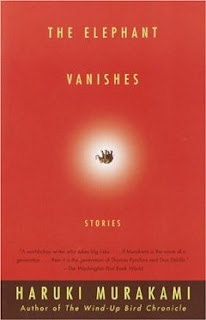 Reviewing short story collections is much more difficult than simply reviewing a novel because you have to assess each individual piece and then somehow analyze the entire collection as a whole. Yesterday's review of Dunsany's The Sword of Welleran and Other Stories went well enough, I guess, for me to take another stab at it, this time with 象の消滅 by 村上 春樹.

I've reviewed a novel by 村上 春樹 (Murakami Haruki) before, my first review for this blog: Wild Sheep Chase. This particular volume, 象の消滅 (Zou no Shoumetsu -- translated as "the/an elephant's disappearance") is a collection of short stories that showcase the author's Kafkaesque style.

This style is heavily influenced by a great deal of irreverent American fiction from the early 20th century. Murakami's written translations Salinger's The Catcher in the Rye, Fitzgerald's The Great Gatsby and My Lost City, everything by Raymond Carver, several works by Truman Capote, and most notably Raymond Chandler's Farewell, My Lovely and The Long Goodbye. The Chandler connection is something I'm quite familiar with, being a fan of hardboiled noir, and his influence on Murakami's style comes through the story translations by Jay Rubin and Alfred Birnbaum. Almost all of Murakami's characters are cut from the same cloth--they smoke Hope regular cigarettes, drink, listen to vinyl records, possess a wide knowledge of music and haute cuisine, and live on the fringes of decent, acceptable Japanese society. However, this doesn't mean that they are all uniform--many of them are extremely unique and outstanding. However, a number of them seem to be little more than stand-ins for Murakami himself, or perhaps projections of Murakami's ideal character--a little bit Philip Marlowe, a little bit Nick Carraway, some Holly Golightly and Fred, and a dash of Holden Caufield, mixed in a uniquely Japanese environment.

Indeed, it is probably easier for an American to identify with Murakami's protagonists than it is for a Japanese person.

Nevertheless, they do suffer from the overwhelming regularity of their personalities--between novels and stories, there isn't a huge amount of difference between Murakami's protagonists. I have a difficult time believing that, if one would switch them between stories, they'd react any differently to their situations. As time grows on, this weakness becomes more and more apparent. In his novels, Murakami's heroes are somewhat better defined, but that is because it is much easier to develop a character's personality in a novel-length work than in a story of 25-30 pages. It isn't helped that Murakami almost universally utilizes first-person narration throughout his stories, but only further manages to make the protagonists appear identical to one-another.

The stories themselves are all infused with a sense of weirdness, often to the point of surrealism. The most outstanding ones are "The Second Bakery Attack," "Sleep," "The Little Green Monster," "TV People," "The Dancing Dwarf," and "The Elephant Vanishes." The more subtle ones are actually somewhat more powerful because of their subtlety-- "On Seeing the 100% Perfect Girl One Beautiful April Morning," "Lederhosen," "Barn Burning," "A Family Affair," "The Last Lawn of the Afternoon," and especially "The Silence."

I feel compelled to talk about all of these stories, and indeed I could go on at length, but I'll limit my analysis to just a few. 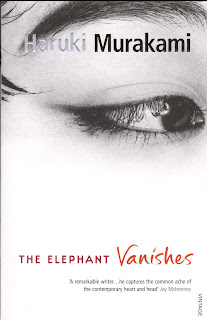 First, I will discuss the subtle stories, starting with "The Silence," my personal favorite. It describes a student, a boxing champion who almost never raised his hand against anyone, encountering a nemesis in middle school and developing an enmity which would last until high school graduation. This nemesis would avenge himself against the protagonist by indirectly framing the hero of tormenting and bullying another student until they committed suicide. The resulting silence, reflected in the title (沈黙 -- "Chinmoku"), is the silence of complete and total social ostracism. The protagonist effectively becomes an untouchable, invisible, inaudible person--his teachers and fellow students ignore him. This begins to effect him very negatively, especially since ostracism is an incredibly painful experience to a Japanese person. The Japanese value socialization far more deeply than Americans do, and membership in peer groups gives them a great deal of self-worth. Although Americans more-often-than-not are weak and willing to succumb to peer pressure, we have a deep (and sometimes grudging) respect for rebels and renegades who are strong enough to march to the beat of their own drummers and persist, even through friendlessness. Nevertheless, the protagonist manages to get through this experience, but it exacted a powerful spiritual price on his soul. He emerged stronger, but also much less trusting and faithful of his fellow humans, even his own wife and progeny.

This story is incredible, because it is a naked criticism of the herd mentality in Japanese society, the cowardice of individuals unable to break away from collective opinion to do what is right and just, and the use of ostracism as a social punishment. It did a lot to remind me of my own experiences in middle school, a very painful and difficult time for me. It has also comforted me a great deal during my time in Korea.

"No, what really scares me is how easily, how uncritically, people will believe the crap that slime like Aoki deal out. How these Aoki types produce nothing themselves, don't have an idea in the world, and talk so nice, how this slime can sway gullible types to any opinion and get them to perform on cue, as a group. And this group never entertains even a sliver of doubt that they could be wrong. They think nothing of hurting someone, senselessly, permanently. They don't take any responsibility for their actions. Them. They're the real monsters. They're the ones I have nightmares about. In those dreams, there's only the silence. And these faceless people. And then it all goes murky. And I'm dissolving and I'm screaming and no one hears."

That's some pretty powerful stuff, even in translation, and it is Murakami's finger wagging in the face of Japanese society as a whole. What is subtle here is the strangeness that is at work; the sense of the surreal is very subdued. However, Murakami's "j'accuse" is loud and unmistakable.

I think it is reasonable that I approach perhaps one more story, although there is something I'd like to say about almost all of them, but that would stretch the length of this review to absurd lengths. "The Little Green Monster" is about an eponymous creature that crawls from the ground and asks the protagonist to marry him. Her reaction is abject revulsion and disgust. This creature, despite its appearance, is actually a very gentle and empathic being, capable of feeling emotions and thoughts. When she realizes this, the heroine focuses her disgust and hate against the creature, effectively killing and dissolving it until not a trace of it is left.

Although there's a lot I want to say about this story, I'll try to keep things brief. This story is about hate, specifically the hatred of anything that is different or unfamiliar. The creature is weird and terrifying at first, but it means no harm and its distinctly human eyes should convey vulnerability and honesty. However, to the "heroine," they convey wrongness and are part of the overall discomfort that this creature's strangeness causes her to react with fear and revulsion. This revulsion is turned into pure hate and destroys the creature, a creature who came with peaceful intentions and love on his mind. Whether this story is about women in particular or humans in general, I can't really answer, but Murakami rarely chooses women as his protagonists, so that may say something. In almost every surrealist story that Murakami writes, things are symbols and metaphors for something else, and in this case, the creature is just that--the strange and unfamiliar. This is a meditation on fear, disgust, and hatred, and the darkness that hides in the human heart--darkness and hatred that can easily lead to murder if the conditions are correct.

Murakami's work is a rebellion against the ordinary. Indeed, he contentiously injects weirdness and absurdity into the immensely average lives of so many Japanese characters in order to shake them up. Through his stories, he aggressively critiques the everyday life of Japanese society--the uniformity and homogeneity, the disingenuousness of Japanese politeness, and the herd mentality that permeates Japanese social relations. Murakami wants to shake up the reader by shaking up the characters.

Murakami also wants to explore other themes that go beyond simple social criticism. He contemplates existentialism and the regularity of life--indeed even the meaningless of it and detachment from love and human contact (in such stories like "Sleep") or pondering what could or perhaps should have been but never was nor will be ("On Seeing the 100% Perfect Girl One Beautiful April Morning"). Loss and nostalgia play definite roles in many of his tales, including the changes in relationships brought about by age, maturity, and marriage ("A Family Affair"). 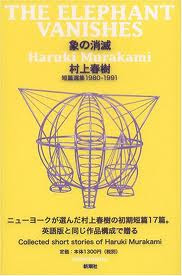 By-and-large, Murakami's stories hold up. They're not as profound as his novels, but they are much more immediate in their impact, and more visceral in the reactions they elicit. Despite his tendency toward repetitive protagonists, the secondary characters throughout his tales are often unique and interesting. The stories themselves are well-crafted. Murakami paces things well, narrating his tales and injecting elements of the strange or surreal at proper intervals to hook the reader and continue to draw them in. Curiosity is a major motivator in reading a Murakami story, and the author channels our curiosity extremely well. He's a master storyteller, and this collection stands as evidence of his ability to spin an effective yarn that not only keeps our attention, but challenges our assumptions and demands that we think a little bit deeper about ourselves and about our world and society.

象の消滅 (The Elephant Vanishes) by 村上 春樹 (Murakami Haruki)
Style B+
Substance A
Overall A-
Posted by Dave Cesarano at 1:00 PM