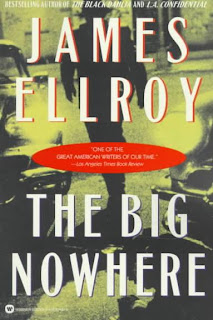 James Ellroy, the self-proclaimed "Demon Dog of Crime Fiction," is the culmination of everything that began with Dashiell Hammett and Raymond Chandler, writers whom he read heavily in his youth, accompanied by drug and alcohol abuse. The darkness of his own life experiences would come to be channeled into his fiction, producing works that are the ultimate realization and perfection of the hardboiled noir genre.

The Big Nowhere is no exception, and perhaps my favorite book by Ellroy that I've yet read (and, ironically, the only book in his LA Quartet that hasn't been made into a film). Sandwiched between The Black Dahlia and LA Confidential, The Big Nowhere plumbs the darkest depths of the human soul and dredges up the blackest ichor that we spend immense amounts of energy trying to ignore or escape. It is a dark, pessimistic tragedy, and yet simultaneously a triumph for the hardboiled noir genre as a whole. The book is a wrecking ball written in a terse, staccato, laconic style, laced with jive-talk and bebop rhythms.

This is one of the books that forever changed me. The list of books is pretty short: Dune, The Lord of the Rings, Blood Meridian, and Fight Club are pretty much at the top. James Ellroy's The Big Nowhere is among them as a book that has had a tremendous impact upon me.

This is the tale of three very different cops that are drawn together for a grand jury investigation into communist influence on labor union strikes in Los Angeles of 1950. Mal Considine is an up-and-coming DA's Bureau detective with a very dubious act of "heroism" on his war record, and a resentful Czech wife and her son as spoils taken from Germany. Danny Upshaw is a homicide detective with the LA County Sheriff's Department, arch-rivals of LAPD, who is on the trail of a twisted killer. Turner "Buzz" Meeks is an Okie ex-cop, moonlighting as an enforcer and occasional pimp for Howard Hughes that is drawn into the grand jury investigations through his connections to Mickey Cohen, local mobster kingpin.

Ellroy rushes in where Hammett and Chandler feared to tread. Drugs, prostitution, corruption, racism, and homosexuality are openly and brutally exposed. Ellroy is not afraid to illustrate the darkest pits of mid-century Los Angeles. As with most of his novels, the city of LA is, itself, a character, and not a very nice one, either. The city that is the 1950s embodiment of the American dream is little more than a thin veneer of fantasy over a seething pit of vice and iniquity. Ellroy is a brilliant talent at crafting real, believable characters, and is a genius at creating tragic heroes out of noir protagonists.

To truly understand Ellroy's writing, one must understand the conventions of the hardboiled noir genre. The noir protagonist is a sort of antihero. He is often a world-weary individual, disillusioned and cynical. He sees the world as corrupt, a place where no good deed goes unpunished and lives to get his kicks. At heart he may be a sentimental romantic deep at heart, but he keeps it hidden and repressed, because whenever he allows himself to be vulnerable and truly care about someone, it always backfires. He lives by a code of honor that is his own, and strictly defines himself according to it. In a world of predators, prey, and scavengers, the hardboiled hero struggles to be his own man and not to fall into any of those categories. Typically, a noir hero will come up against some sort of challenge to his code, and will either compromise it and fail, or he will succeed and triumph, only to find the reward to be not worth the cost and the victory Pyrrhic at best, empty and meaningless more often than not. 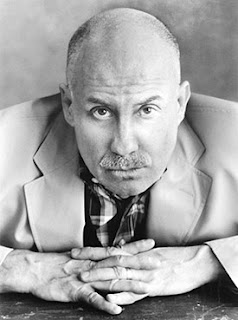 Considine, Upshaw, and Meeks don't perfectly fit the archetypal noir hero, but that is because Ellroy creates unique and multidimensional characters. They're not a riff off of Sam Spade, Philip Marlowe, or J.J. Giddes. They're each deeply driven by believable motives, possess compelling personalities and worldviews.

Considine is haunted by his cowardly slaying of a Nazi officer--an action he took in order to avenge his Czech girlfriend's tarnished honor. The victory became hollow when, after years of marriage, she began to resent her life in America and yearned for the Czechoslovakia of her youth, before the occupation. Her son, who had suffered horrific sexual abuse during the occupation, associates the Czech language with his traumatic experiences--something his mother disregards in her desire to de-Americanize her son and make him into a good Czech boy. Considine, sees the grand jury investigation as a way to propel himself to the highest pinnacle of DA Bureau brass and make an inviolable name for himself in order to secure custody of his adopted son in the divorce proceedings.

Upshaw is far more complex and troubled. He is a young crusader cop that is tormented by his latent homosexuality and plagued by his own revulsion of female sexuality. Throughout most of the novel, he keeps it deeply buried and subdued, denying it to himself. However, the clues are there--with every stomach churn he feels when a woman winks at him, or his fascination with certain young men's appearances. A brutal murder with homosexual underpinnings begins to absorb Upshaw, who has been obsessed with the darkness in the human soul since he witnessed the barbaric slaying of a young woman as a youth. This obsession seems to be a sublimation of his own sexuality. However, the trail of this killer, who stalks and murders homosexuals, begins to drag his own buried demons out of his subconscious and into the light.

Meeks is the most straightforward character in the book--but that does not mean that he is shallow or two-dimensional. Meeks doesn't have any deep dilemmas or skeletons in his closet. At heart, he is a gambler, and the thrill of risk gets him into trouble. Knowing full-well the stupidity of his actions, he falls in love with Mickey Cohen's squeeze, and plays a huge gamble to keep his association with her secret.

These three seemingly unrelated characters are pulled together by the labyrinthine nature of LA intrigue. Ellroy writes like a spider, weaving a silk web of murder, politics, conspiracy, and betrayal. The heroes' flaws prove their undoing, but not in very predictable manners, and only the most tarnished of the characters really manages to make it through (although his ultimate fate is not revealed in this volume, but in the prologue of the next--LA Confidential). Their flaws, however, make them so real, it is difficult not to like the characters. Indeed, despite past rivalries and bad blood, they find it difficult not to like one another, resulting in a friendship between the three that, unfortunately, gets them all into more trouble.

Most compelling, however, is Lieutenant Dudley Smith.

An astute reader who has seen LA Confidental or read Clandestine will recognize Dudley Smith. Of all Ellroy's characters, he is the most persistent--and perhaps the most evil and villainous. Dudley is a master-manipulator, kingmaker and breaker, vindictive to the extreme, with a small cadre of loyal underlings and enough bureau clout to make or break any man's career. The man is far, far more than he appears, and if I was a bit more of a literary romantic I'd suggest that the character was actually the Devil himself. Smith is generally soft-spoken and not given to great displays of emotion, but just as still waters run deep, Smith's appearance as a mid-level policeman is remarkably deceptive--Smith is perhaps one of the most powerful men in the entire city. He resurfaces in many of Ellroy's books, and indeed is often somehow or some way at the root of many of the mysteries and intrigues that take place. Dudley Smith is almost always the ultimate victor--true to hardboiled noir form, the smart, subtle, and remorselessly ruthless are the ones who win.

The style of prose is terse, direct, and laden with vernacular, giving a lot of spice to the tale. Ellroy writes how his characters think and unabashedly drops racist epithets and slang that were commonplace in the mid-twentieth century American parlance.

Buzz checked his watch. 4:45; Howard Hughes was forty-five minutes late. It was a cool January day, light blue sky mixed with rain clouds over the Hollywood Hills. Howard got sex crazy in the winter and probably wanted to send him out on a poontang prowl: Schwab's Drugstore, the extra huts at Fox and Universal, Brownie snapshots of well-lunged girls naked from the waist up. His Majesty's yes or no, then standard gash contracts to the yes's--one-liners in RKO turkeys in exchange for room and board at Hughes Enterprises' fuck pads and frequent nighttime visits from The Man himself. Hopefully, bonus money was involved: he was still in hock to a bookie named Leotis Dineen, a six-foot-six jungle bunny who hated people of the Oklahoma persuasion worse than poison. 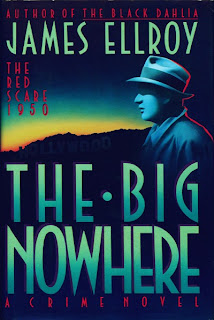 Raw, visceral, staccato, jazzy, and unapologetic. Ellroy often writes in dangling clauses, creating a conversational, matter-of-fact tempo that lends his prose the texture of concrete and asphalt. The end result is a masterpiece of crime-fiction. Ellroy's world is not a happy one--it is very much the hardboiled noir setting where no good deed goes unpunished, good folks are just saps waiting to be suckered, and the bad guys can (and do) win. When such a world is populated with characters like Meeks, Considine, Upshaw, and Smith, and described with streetwise prose in jazzy rhythms, the combined result is a masterpiece of American literature. Ellroy describes a bleak but essential facet of the American reality using an urban American cant. With The Big Nowhere Ellroy's song is a lament for the heroic, a funeral dirge played in saxophone jazz, much like the eponymous tune that a certain Coleman Healy would compose within the novel's pages. Ellroy has crystallized hardboiled noir into one single, perfect narrative that carries forth every theme of the genre to true fruition. It is not an archetypal noir tale--the archetypes are books like The Maltese Falcon and The Big Sleep, or movies like Chinatown. Rather, The Big Sleep approaches the Platonic ideal. Ellroy has broken his chains and left the cave where Raymond Chandler and Dashiell Hammett create shadows of noir upon the cavern wall, and realized the heights--or depths--which the genre can achieve.

The Big Nowhere by James Ellroy
Style A+
Substance A+
Overall A+
Posted by Dave Cesarano at 4:05 PM