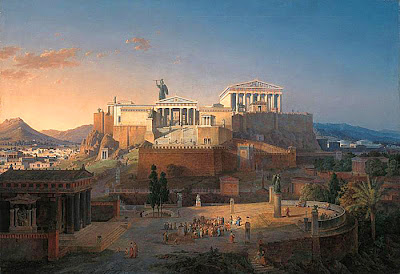 When designing a course that is set to cover everything from the Bronze Age all the way to the conquest by Rome, you have to decide what you can fit into a fifteen-week semester with about three hours of class-time each week.  This is not easy.

The most difficult decisions are not what to include, but what to omit.  This also crosses over into readings that the course requires.  Since it is a 300-level class, I've had a lot to consider.  I want to expose the students to some of the more prominent historians of the ancient world.  This would include guys like Donald Kagan, N.G.L. Hammond, G.E.M. de Ste. Croix, Peter Green, Victor Davis Hanson, and Moses I. Finley, to name just a small few.  I also want to give them readings from the time period, which would include guys like Herodotus, Thucydides, Xenophon, Plato, Aristotle, Hesiod, Homer, Aristophanes... and the list goes on.  The students should be exposed not only to texts by those that lived during the time but also to theory, discussion, interpretation, and analysis by modern historians.

Though choices have to be made. 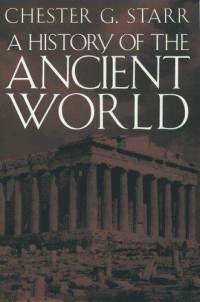 As a primary text for my course, I've settled on Chester G. Starr's A History of the Ancient World.  It's a pretty thorough survey of human history up to the fall of Rome in the West.  I was going to assign N.G.L. Hammond's superb A History of Greece to 322 B.C. but that book didn't cover the Hellenistic Era.  I will, instead, try to integrate some of the things Hammond has to say into my lectures and perhaps a few print-outs for my course packet.

I want to have at least two or three other modern, supplementary texts that will help illustrate scholarship, research, analysis, and interpretations of Greek history and society.  To that end, I wanted to include A. Andrewes' The Greek Tyrants but it seems to have gone out-of-print (and the "new" prices at amazon can't be justified by the brevity of the book).  Therefore, I'm only going to assign the students W.G.G. Forrest's A History of Sparta, 950-192 B.C. and N.G.L. Hammond's The Genius of Alexander the Great.

So much for modern texts.  When it comes to Ancient Greeks, I'm definitely going to require the students purchase Lattimore's translation of The Iliad.  Playwrights are also an important inclusion, so I'm assigning some Aristophanes (preferably The Wasps and Lysistrata) but I don't want to give them bowdlerized Penguin editions, so I'm searching for more accurate translations that have all the plays I want the students to read contained in one volume.  As for Plato, I'm certain I can find a decent volume that contains The Apology, Crito, Euthyphro, and maybe a couple other dialogues.  As for tragedy, I've pretty much settled on Oedipus at Colonnus since it illustrates a lot about the polis.  Although Plutarch was writing much later and was a conservative/reactionary whose moralizing severely slants his biographies, I'm considering the inexpensive Penguin collections of his Lives, such as The Rise and Fall of Athens: Nine Greek Lives and On Sparta.

The course packet will contain selections of readings, excerpts of poetry, plays, Plato's dialogues, some Aristotle, some Herodotus and Thucydides (especially the Melian Dialogue) and a couple of chapters from some modern scholarly works.  Perhaps I'll discuss more of that later.
Posted by Dave Cesarano at 5:59 PM

Nice reading list. Now if only I had the time...