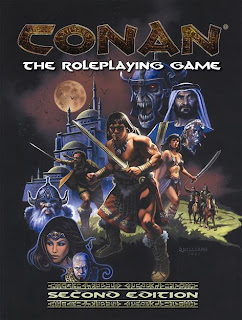 Back in graduate school, I had barely enough time to run a very short-lived Hyborian campaign, using the D20 Conan the Roleplaying Game rules from Mongoose Publishing. Conan is not the kind of setting that an OD&D game would really fit well with, I'd think. Why? Well, simply because OD&D seems more at home with a mega-dungeon. Reading through James' Dwimmermount posts at Grognardia, Justin A.'s reactions to OD&D at The Alexandrian, and reading through the White Box rules myself, I've come to the conclusion that OD&D is more at home in the mega-dungeon than anyplace else.

Yeah, Robert E. Howard is a huge influence on OD&D, and the pulpy stories that he and others (like Fritz Leiber) wrote, with scoundrels and ne'er-do-wells adventuring for quickly-spent fortunes being at the heart of the game's flavor--but that flavor is also very much effected by the mega-dungeon, something that Robert E. Howard and Fritz Leiber do NOT dwell on. Dungeon settings pop up in their stories, but never one huge, oft-revisited, re-delved, evolving labyrinth.

A Hyborian adventure lends itself to two types of games, in my opinion--the city game or the wilderness game--exact opposites of what the mega-dungeon game involves. In the mega-dungeon game, the sandbox approach works incredibly well. The players and DM together, through play, create the world. There are maybe one or two bases of operation, and one big, bad dungeon that is repeatedly delved, deeper and deeper each time. But the city and wilderness games require a more definite approach. 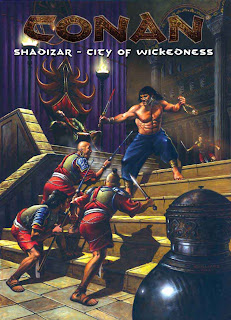 I ran my game in Shadizar, capital of Zamora and City of Wickedness. The city game needs a pretty detailed setting, so I went to mine ideas from the Shadizar--City of Wickedness boxed set by Vincent Darlage. Yeah, I don't recommend it. The original map for the book was a joke, and the setting details were completely culled from pastiche sources, like the cheesy Conan books by Robert Jordan and the comic books. Now, I'm not knocking the pastiche, but it's not Howard, and honestly, if it's not going to be Howard, it may as well be cooked up in Darlage's own head. All of the locations were all taken from the pastiche books, all the gods from the comics, and none of it was Darlage's. There was a single adventure in there, entitled "Dark Dens of Iniquity." At its core, there could be a decent adventure. You have some interesting characters with neat motivations, but the adventure itself is basically the PCs being railroaded from one encounter to the next with really very little coherent plot development--as a railroad adventure "Dark Dens of Iniquity" even failed! But there were some really good feats (like "Eyes of the Magpie") and a few decent prestige classes in the books to make it worthwhile, plus a few tables on slaves, kidnapping, and prostitution that could be useful. And Mongoose had the good graces to produce a better map of the city for download on their website. 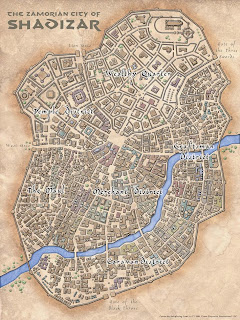 So, I decided to bust out my trusty pen and pencil and completely rework the adventure and city from the ground up. I spent money on the boxed set, and thankfully, a second map was released online for me to download and use. I mined some other sources for ideas, namely the Scarred Land's Shelzar--City of Sins (the similarity in names is NOT a coincidence), Planescape's In the Cage--A Guide to Sigil (for general weirdness), Dark Sun's The City-State of Tyr (for the harshness of setting), and the Forgotten Realms' City of Splendors boxed set (the 2nd edition masterpiece, not that 3rd edition abortion of a crunch catalog). I went through some of Robert Jordan's pastiche books for some locations and characters that Darlage didn't include. And I wrote up pages of notes on the pantheon, factions, politics, people, and locations throughout the city--notes that I can still pick up anytime I want to try and run a Shadizar game again (and I fully intend to do so when I return to the States from Korea). I had neighborhoods mapped, a few inns, merchants' homes, noble houses, and caravanserais.

My kind of sandbox is a bit different from many of the grognards' sandboxes--the sand isn't the world, but the actions and deeds of the players. The shovels, molds, and other tools/toys for shaping the sand are the rules-set and the setting design. The more thorough, the more it gives the players to work with.

Despite how short-lived it was, it was pretty successful with the two who played it, Jason and Kyle. It lasted about four sessions and went halfway through a story-arc. Given the characters in Vincent Darlage's "Dark Dens of Iniquity" I managed to create a pretty compelling adventure that would make a decent pulp novella had it run its course.

2. Prepping the situation required characters and motivations. I took the characters Darlage provided me, adjusted names, occupations, and personalities to fit what I wanted better. 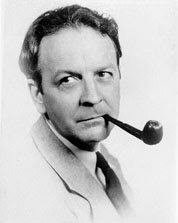 3. Take Raymond Chandler's advice: Whenever things start to slow down, have someone kick in the door with a gun. Robert E. Howard wasn't the only pulp writer out there, and he wrote a lot more than just Conan stories. Mine them for ideas and principles. Run your game like its a pulp story. Therefore, if the characters are stumped, stuck, or not sure what to do next, throw them something to make them start moving again. I had a gang of thieves and cutthroats who's leader wanted the PCs dead (they humiliated him almost immediately) and owed the badguys money for just this purpose. He and his gang were just the sort of characters the players loved to hate.

4. Use a MacGuffin. And what better MacGuffin than the Heart of the Elephant! At first, they didn't even know what it was, but when they finally realized what they had stolen, they were terrified. No wonder the King and this crazy evil sorceress are after us! They have no idea how to use such a powerful magical item (which limits their ability to break the game), but there's the possibility that, over time, they could unlock its secrets. But its a dangerous artifact, and a lot of people are going to be after them to get it! MacGuffins can get overused, yeah, but they're a staple of hardboiled stories and pulp ever since The Maltese Falcon.

5. "The only way out is to go deeper." Halfway through session 3, when Kyle's character turned to Jason's and said, "This is too big for us. How do we get out of this mess," Jason's responded with this line. (And he was very happy that he actually had an opportunity to say something like this in a game.) This sums up a lot of hardboiled pulp stories. Granted, they're different from sword-&-sorcery tales, but a lot of themes, pacing, and action are the same, so there's no reason not to mine the likes of Raymond Chandler, Dashiell Hammett, and Mickey Spillane for storytelling techniques. Create a conspiracy or two, devise factions, and throw the PCs in the middle of the whole mess.

6. They're writing the story, not you. You just set the pins up. Let them knock them down (or get knocked down by the pins themselves). Let your world react to the PCs. They're the ones the story's about. If they do nothing, the world moves on. If they act, react in a logical manner. Throw them challenges, see if they have the wits to survive. Remember, Conan wasn't stupid, and he lived by his wits just as much as he did by his sword.

The end result was a lot of fun. The game didn't end due to lack of enthusiasm, but because work on my MA thesis was ramping up big-time and Jason and Kyle were writing papers and preparing for exams themselves. After my MA thesis was done, I graduated and came to Korea, so we never did manage to pick the game back up. There are a number of story-arcs I'd wanted to explore--one or two were spawned simply by decisions the PCs made during their game (such as the debt to the mysterious information broker). But when I return from Korea, I definitely want to resurrect the game and see what I can do with the twisted webs, dark conspiracies, weird sorcery, and deadly secrets that await in Shadizar, the City of Wickedness.
Posted by Dave Cesarano at 1:31 PM

Reading this, I'm really bummed we never got a Conan game off the ground here. Oh well, too many incompatible personalities.

I like your ideas for a 'city sandbox' here. And I definitely agree that the Noir/Pulp crime novel or movie makes good inspiration for fantasy games. Westerns work really well, too, but give a different feel.

Yeah, I'm sorry, too, Dennis. It's been pretty stressful here in Busan with no gaming. At least you're keeping busy! That'll help distract you from the dearth of good role-playing going on.

You're right about Westerns, and I think they're a great inspiration for a Hyborian wilderness game. Howard was definitely inspired by Westerns when he wrote about Conajohara, the short-lived Aquilonian frontier-post in the Pictish Wilderness. Conan survived its destruction and lived to tell the tale!

When I think about Westerns and noir, I think about Last Man Standing, and that leads my thinking to 用心棒 (Yojimbo), which finally goes back to Dashiell Hammett's The Glass Key and Red Harvest. It's amazing how a lot of these sorts of adventure stories--hardboiled noir, Westerns, and sword-&-sorcery--have a great deal in common, have all been in the pulps, and have all sorts of storytelling tools that a GM can use to make his games more exciting.

I ran a successful Thieves' World City of Sanctuary campaign. The books had a fantasy noir feel to some of them. At least there were enough interesting characterizations to pepper any given situation to taste.

As much as I like a good dungeon delve, city games can be so invigorating.

Thieves' World... Now THERE is a book I definitely have to read! I've heard a lot about it, and my interest is definitely piqued.

City games are a lot different from the old dungeon delves. Intrigue and sneakiness come into play a lot more. They are, probably, my favorite games to run--but they also require the most amount of work from me! I guess that's why they're so rewarding.