Book Review -- THE SIGN OF THE LABRYS by Margaret St. Clair 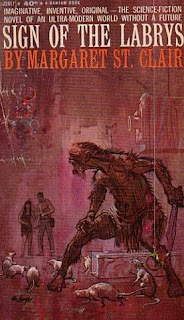 I saw this review over at the Alexandrian for Margaret St. Clair's The Sign of the Labrys. What is noteworthy about this novel is that it is one of two by the author listed in Gary Gygax's Appendix N, a list of works that inspired the Dungeons & Dragons game. James Maliszewski over at Grognardia posted a review of her other novel, The Shadow People.

Interest piqued, I ordered Sign of the Labrys used over amazon, had it mailed with my seasonal care package from home to Korea, and put it on the shelf. It took me two days to read it (and the only reason it took so long is because I am so busy). The book barely makes it to its 139th page, which is actually quite short, even as may mid-20th-century pulps seem to go.

The first thing I would like to point out about this book is the back cover blurb: 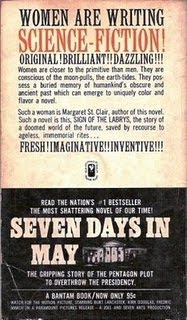 It claims that this work is "ORIGINAL!BRILLIANT!!DAZZLING!!!...FRESH!IMAGINATIVE!!INVENTIVE!!!" Aside from my amusement at the multiplying exclamation points, I have to say that, while Margaret St. Clair's The Sign of the Labrys was entertaining, I can't say that there is any great deal of originality or all of that.

The story starts out with a pretty compelling setting--it is a post-apocalyptic future brought about by plague in which 1 out of every 10 people survived. Society breaks down, but there are vast stores of food that prevent starvation, so people don't really need to work. A main feature of the setting is a vast underground refuge complex, built in case of nuclear holocaust. Much of the population has become very agoraphobic, and they live spread out from one-another both in the emptied cities and in these large underground labyrinths.

The setting is actually the most interesting aspect of the book. St. Clair combines the post-apocalyptic settings of nuclear holocaust literature with fantasy and gives the collapse of society a totally non-nuclear cause. In addition, St. Clair's humanity learns to survive not by being murderous or barbaric, but completely isolationist. Essentially, most of the characters are hermits that fear other people (mostly because of contagion).

The primary reason to read this book, honestly, is to see where Gygax (and perhaps his players) came up with some of the ideas for Dungeons & Dragons. In this case, perhaps, utility spell use during dungeon exploration and problem-solving techniques. The main characters almost never confront their opponents in hand-to-hand combat, but instead utilize trickery, stealth, and strategy to defeat their antagonists. This reminds me of a story I read on the RPG.net forums:

I played a Magic User in Greyhawk .. THE Greyhawk... for a while. Up to 6th or 7th level when I retired him because I was tired of him and went back to my 8th level fighter.

My favorite adventure was as a 1st level MU. I had heard about an entrance to the 3rd level of Greyhawk and went down. Alone. With 3 HP and a Charm Person spell. Just me. A 1st level MU. In Greyhawk Castle. With Gary Gygax reffing.

I hit 2nd level at the end of the night with enough XP to be one shy of 3rd. I ran, I snuck, I threw lanterns (fire, oil, and a handle in one convenient package!), I ran, and I ran some more. It was still one of the best single evenings of gaming I've ever had.

Attitudes aside, this is what struck me about the characters in The Sign of the Labrys. It was as if they were wandering through Castle Greyhawk with only their wits, a single charm person spell, and a couple of lanterns to throw. The labyrinth in the novel is, in many ways, an archetypal megadungeon. It is laced with secret doors, special rooms, various servitors and defenders, and all sorts of interesting tricks and mechanisms. It is huge and fathomless and full of mysteries.

Unfortunately, the labyrinth is the most interesting part of the entire book. Once you are past the novelty of reading a book that perhaps inspired some of the gameplay and dungeon design of Gary Gygax and his original Castle Greyhawk crew, the book loses a great deal of its charm. Its strengths are in the speed and handling of its pacing and the brevity of its descriptions. However, those strengths quickly become weaknesses as the novel progresses and St. Clair fails to successfully develop the characters or any setting elements beyond the labyrinth itself.

The prose style is rather flat. The book reads a great deal like a lot of mid-20th century science fiction, especially Asimov. The characters are disappointingly flat, and they seem to be somewhat detached from reality. It is almost as if they are simply vehicles to advance the story along.

I turned toward the noise. She wasn't there.

I hadn't heard her go toward the door. I hadn't felt it open. I said, "Where are you?"

"Right here." Her voice was perfectly clear, and it came from the same spot where she had been standing when she had had me turn my eyes away.

"That's fine. I haven't done this much recently." Suddenly she was visible, standing just where the blur had been.

This passage is pretty typical for St. Clair. Something happens, but it is described in the bleakest, briefest manner possible. The two characters are completely static. They don't move. Sam (the protagonist) doesn't reach or attempt to touch the blur. Indeed, the blur isn't even described beyond just being called "a blur." The dialogue doesn't feel natural, and is pretty emotionless and almost clinical.

The way St. Clair handles major revelations, romance, and plot points is ineffectually. Below is an example where all three are combined and it is pretty disappointing to read. Be aware, there are spoilers here.

I rolled toward her and took her in my arms. "Kyra," I said, "let me go back with you when you go. Let me stay on F with you. If you have to stay there, I'll stay. We're close to each other already, darling. Already we're half in love. We could be happy together, even on F. It's an unpleasant place, but we'd be lovers, dear."

She had not resisted my embrace, but she had not yielded to it. "No," she said softly. "I'm sorry, Sam."

"What is it? Some sort of prohibition, like the one that makes you stay on F?"

I let her go and she rolled out of my arms. I half sat up, leaning on one elbow, and looked down at her. She looked up at me unwinkingly.

"My sister? Are you sure? How long have you known?"

"Yes, I'm sure. I've known since you first told me your name."

I sat up on the edge of the bunk, my head between my hands. Her tone had brought conviction to me. There would be explanations; she would tell me how this extraordinary thing could be possible.

I did not doubt she had told me the truth. But now my future opened blankly ahead of me.

Casanova Sam is not and he is either gullible as hell or strange things are afoot (as it happens, strange things have been for some time in the novel). Nevertheless, this pivot-point is handled extremely poorly. The dialogue doesn't flow naturally at all. This segment is a great example of how characters end up "just knowing" things without explanation. And St. Clair's coining of terms is lackluster at best. "Unwinkingly?"

Overall, the novel comes off as a kind of cheap, lackluster New Age morality tale. The feminine is accentuated, but in a clumsy, haphazard manner. The main characters are all "witches," although they don't always know it at first. As the story progresses, through experimentation and training, they "discover" their abilities, but the dreary banality of day-to-day existence would normally have prevented them from ever noticing that they were different from anyone else. This whole "I'm special" business is coupled with repeated references to the moon, bronze-age Cretan imagery (such as the labrys--the double-headed axe--and the existence of the labyrinth itself), and dualism (male-female, science-magic, etc.) The "witches" are extremely intuitive and often just "know" things even though they don't know how, weakening the plot, destroying tension and just making the whole thing feel uninspired and lazy.

While some of this might sound interesting, it is executed rapidly and with very little explanation. It comes off as haphazard. When characters just seem to "know" things, it feels as though it is because the author simply needed them to in order to move the plot forward. The dialogue is rather stilted, and the characters personalities are all very flat and uninteresting. The emotional ties between them seem tenuous and ill-developed. The female protagonist-cum-potential-love-interest is thoroughly uninspiring. Everyone comes off as wooden and predictable, like cardboard cutouts instead of actual people--they are simply what St. Clair needs them to be in order to tell her little morality tale. A great deal is left unexplained, partially because the characters constantly end up just "knowing" things. One example is the eponymous labrys sign that is found scratched into walls once or twice through the novel. What the heck does it mean? Who put it there? It inspires the protagonist at two points to take interesting actions, but beyond that, it serves no purpose and is never explained. For some, this might not be noticeable, but for me, especially since it is the title of the book, it becomes a debilitating plot hole. St. Clair never develops it, never explains it. She just drops it in twice and then forgets about it.

All together, it's not a terrible book. It's definitely worth a read, especially if you've nothing going on for a few hours and are interested in seeing where some of Gygax & Co.'s ideas originated. Personally, I found Jack Vance and Fritz Lieber to be far more interesting.

The Sign of the Labrys by Margaret St. Clair
Style D+
Substance C-
Overall C-
Posted by Dave Cesarano at 11:22 AM

That back cover blurb had me in stitches.