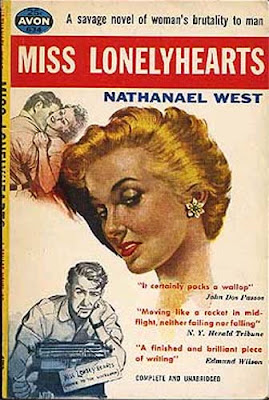 I read West's Miss Lonelyhearts in a few hours. I started it on a Wednesday night, stopped after about 20 pages, and finished it at a Dunkin Donuts in Hwamyeong, Busan, around 11:00 am the following morning.

West's novel traces a few weeks (or perhaps months) in the life of an advice-columnist for a New York City newspaper during the late 1920s/early 1930s. He remains unnamed, but the narration dubs him "Miss Lonelyhearts" after his column title, a term his sarcastic employer, Mr. Shrike, uses as his nickname.

"Miss Lonelyhearts'" sex-life is a complete mess, and I can't help but wonder if the entire "sheep sacrifice" scene (about 1/3 into the novel) can't be taken as a metaphor for his romantic exploits (more on this later). They are all disastrous. "Miss Lonelyhearts" is, essentially, what Style/Neil Strauss would call an AFC ("Average Frustrated Chump") in The Game. His own relationships with women are abusive. Many of them seem to leech off of him. However, the one that doesn't inexplicably disgusts him. He begs a married woman for sex, and cannot refuse a disgusting woman's advances. He is incapable of dispensing meaningful advice simply from the fact that he cannot even run his own life effectively. He is deeply misogynist, but his misogyny is something that one can perversely understand and relate to--it is an extension of his general misanthropy.

West describes the origins of this misanthropy:

"His friends would go on telling these stories until they were too drunk to talk. They were aware of their childishness, but did not know how else to revenge themselves. At college, and perhaps for a year afterwards, they had believed in literature, had believed in Beauty and in personal expression as an absolute end. When they lost this belief, they lost everything. Money and fame meant nothing to them. They were not worldly men."

Disillusionment and disappointment. "Miss Lonelyhearts'" subscribers, and "Miss Lonelyhearts" himself, have all put themselves in their disastrous positions and cannot see beyond themselves. They are ultimately selfish and incapable of real love. Their religion was art and in the ennui that defined the "Lost Generation" after World War I, they discovered that art and beauty were hollow concepts because they themselves had become corrupt. Their own needs trump the needs of others, but their corruption is so potent that not even wealth and notoriety hold value anymore. Existence has become an existential nightmare of pointlessness.

It is only when "Miss Lonelyhearts" begins to actually give himself up to Christ near the novel's climax and make a conscious decision to see beyond himself and truly help others does he drag himself out of the noxious funk that his life had become. Nevertheless, it is not enough--and it is too late for him to really save himself, or anybody. In the end, it was all for nothing.

West's novel isn't very happy. One of the primary themes is that disillusionment and disappointment that so permeated the Depression. "Miss Lonelyhearts'" subscribers are plagued by horrific situations, sometimes unbearable situations, but there are no easy answers, only difficult decisions that must be made. The entire atmosphere of the book is grim and unhappy. Indeed, there's little cause for celebration in the novel. Everyone's life is miserable for some reason or another. "Miss Lonelyhearts'" subscribers all bear some sort of cross, likening themselves to Christ in some strange, grotesque manner.

Christ is omnipresent throughout the novel--almost to the point of being a very character in the tale. Quite early on, "Miss Lonelyhearts" remembers a botched attempt to sacrifice a blameless lamb--obviously a metaphor for Christ. In the end he puts it out of its misery in an act of mercy, but the instrument being a rock, the imagery is far more brutal than a simple sacrificial throat-slitting. (Notice also how the "stone" is also used by West as a metaphor for "Miss Lonelyhearts'" advice column--there's a definite connection there.) This particular scene is quite revealing and describes "Miss Lonelyhearts'" religious experience, by-and-large. His own actions and deeds are always confounded.

"Miss Lonelyhearts" views the people who struggle to be rich and beautiful, who seek success, much like he considers his column-readers--as dupes. This act of duping weighs heavily on his soul, as he sees himself doing little more than writing feel-good message that have the moral equivalence of advertisements that inspire people to empty materialism. "Miss Lonelyhearts" is betraying his very faith by uttering cheap falsehoods in the newspaper.

West's book is short but not sweet. It's written in a mildly erratic style, but that is because "Miss Lonelyhearts" immediately becomes an erratic person. The narrative is fast-paced, each chapter only a handful of pages long, tightly focused on one episode. Each episode focuses on "Miss Lonelyhearts" and his interaction with a particular person, place, or idea. However, you do not feel quite jerked from one place to the next. The language of the characters should shock you, as they are only barely in touch with reality beyond their own sick, twisted viewpoint.

"I am a great saint," Shrike cried, "I can walk on my own water. Haven't you ever heard of Shrike's Passion in the Luncheonette, or the Agony in the Soda Fountain? Then I compared the wounds in Christ's body to the mouths of a miraculous purse in which we deposit the small change of our sins. It is indeed an excellent conceit. But now let us consider the holes in our own bodies and into what these congenital wounds open. Under the skin of man is a wondrous jungle where veins like lush tropical growths hang along overripe organs and weed-like entrails writhe in squirming tangles of red and yellow. In this jungle, flitting from rock-gray lungs to golden intestines, from liver to lights and back to liver again, lives a bird called the soul. The Catholic hunts this bird with bread and wine, the Hebrew with a golden ruler, the Protestant on leaden feet with leaden words, the Buddhist with gestures, the Negro with blood. I spit on them all. Phooh! And I call upon you to spit. Phooh! Do you stuff birds? No, my dears, taxidermy is not religion. No! A thousand times no. Better, I say unto you, better a live bird in the jungle of the body than two stuffed birds on the library table."

The words of his characters reveal their psyche very accurately, but it is the narration that reveals the psyche of "Miss Lonelyhearts," who rarely speaks, and when he does, it seems that only fallacious advice and saccharine verbiage emerge. Our protagonist struggles with his own faith (and lack thereof). At heart, he is an idealist. Yet his inability to perceive his ideals challenge his faith and his security. The great irony of the novel is that he is an advice columnist!

"Miss Lonelyhearts" is, in a way, the living embodiment of the struggle the faithful must experience when confronted with the Problem of Evil. 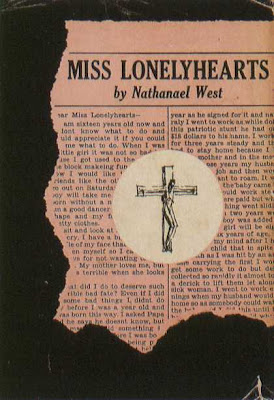 This isn't a happy tale with a happy ending, but the ending is the one that fits. It is very reflective of West's worldview. I haven't read A Cool Million, but I understand that it is a cynical lampoon of the "rags-to-riches" tale that was common in late 19th century industrial America. West seems to be of the opinion that life is generally unhappy, futile, and, perhaps blessedly, short. He also seems to be pretty clear in the idea that people are primarily the cause of their own unhappiness--they got themselves into their situations through folly, doing what "seemed like a good idea a the time." Self-sacrifice is taken advantage of, not rewarded, it seems. Miss Lonelyhearts carries many of the same themes of 1930s hard-boiled noir, although it is most certainly not written in the same style or deal with the same narrative issues. It is raises a definite question regarding the likes of all these advice columnists--"what good are they, really?" And maybe, just maybe, it also suggests that the solution to our problems might just be a bullet to the brain.

Not for the timid or the faint-of-heart.

Miss Lonelyhearts by Nathaniel West
Style A-
Substance A
Overall A-

Posted by Dave Cesarano at 3:35 PM