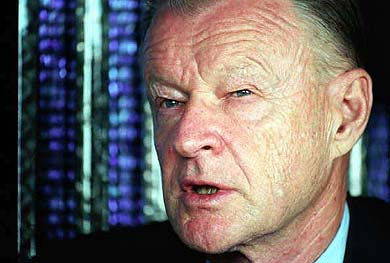 Zbigniew Brzezinski came to the United States from Communist Poland and served on the Carter Administration as National Security Advisor. He's well-known for his dislike of Russia, but has done a great deal of work for the United States foreign relations and diplomacy.

I was turned on to his book, The Grand Chessboard by a series of quotes from the book on The Truth & Lies of 9/11. While I like a lot of what that video says, and am impressed by the amount of research Mike Ruppert has done to connect the dots between the banking oligarchy and the U.S. government, I must admit that Truth & Lies takes Brzezinksi's book 100% out-of-context and presents it as if it were a blueprint for world conquest.

In reality, it is nothing of the sort. 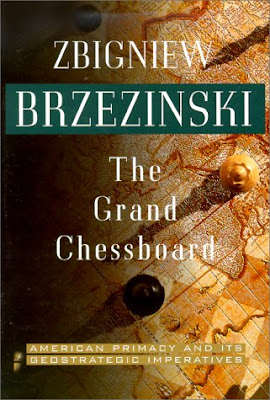 The Grand Chessboard: American Primacy and Its Geostrategic Imperatives by Zbigniew Brzezinski

The opening chapters had me convinced that this entire book was going to be about power-plays. Brzezinski lays out the Eurasian continent as the geopolitical axis of the world--the most important piece of real-estate on the planet. Central Asia is one of the pivotal zones of control in the Eurasian super-continent. It possesses a great deal of material wealth beneath its surface, and control and exploitation of that wealth will shape the economic and political future of the entire planet.

"Two basic steps are thus required: first, to identify the geostrategically dynamic Eurasian states that have the power to cause a potentially important shift in the international distribution of power and to decipher the central external goals of their respective political elites and the likely consequences of their seeking to attain them;... second, to formulate specific U.S. policies to offset, co-opt, and/or control the above...

"...To put it in a terminology that harkens back to the more brutal age of ancient empires, the three grand imperatives of imperial geostrategy are to prevent collusion and maintain security dependence among the vassals, to keep tributaries pliant and protected, and to keep the barbarians from coming together." --pp.40

This reminded me of that pivotal scene in W where Dick Cheney outlines his plans for American Empire.

As I continued to read Chessboard, however, I began to realize that the "Cheney Doctrine" was actually not what Brzezinski is advocating. Indeed, the war in Iraq (although not necessarily Afghanistan) are actually antithetical to what Brzezinski sets forth in his book.

Brzezinski describes America as the first, last, and only global superpower in human history. This does not mean, as some have implied, that America is destined to rule the globe for all time. Rather, he believes that America's empire is destined to recede, but his geostrategic outline is designed to replace the American hegemony with a framework for global international cooperation between nations.

This became apparent in the third chapter of the book, where Brzezinski describes the "democratic bridgehead" of the European Union into Eurasia. When Brzezinski talks of American power and bases for it, he's not necessarily talking about military power, but also political power. The EU is a bridgehead into Eurasia for American power, but Brzezinski doesn't want us to treat it as a vassal state. He sees it as imperative for the US to promote solidity and a sense of integration between the European states. The presence of the European Union is vital to our interests because we need a partner that is our equal in world affairs. Thus, he advises the United States promote unity in between EU member states and adjust its policies in order to foster feelings of cooperation and partnership.

This is all well-and-good, but Brzezinski's book begins to really open up when he discusses Russia and Central Asia. Here, there is far too much to lose. America's policies can encourage Russia to abandon its imperial past of dominance in Central Asia, or it can alienate Russia from the West and cause it to seek a Central Asian hegemony again. This is the key point--Brzezinski does indeed fear Russian imperial aspirations, and he backs those fears up with a lot of information. He wants Russia to follow the other European states and gradually integrate itself into a larger community, while simultaneously breaking itself into a more loose federation that is more flexible in dealing with its neighbors. 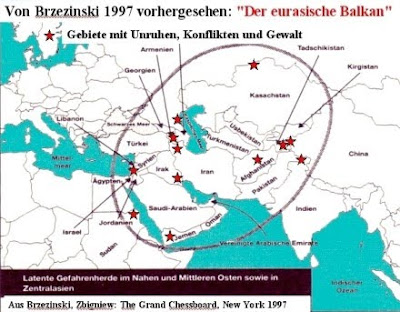 This is because Central Asian states, where all the wealth is to be found, are not too fond of Russia, and any advances that Russia makes to try to regain hegemony over them only alienate them and drive them to states that they perceive as Russia's rivals. This, in effect, creates rivalries where otherwise there'd be none. In other words, because many former Soviet Republics are gravitating toward the United States and other powers for protection, this generates friction between those countries and Russia. What Brzezinski advocates is a promotion of pluralism in Central Asia.

Similarly, Brzezinski believes that we should encourage Japan and Korea to reconcile their differences, Japan to become a more international player (as opposed to a regional one), and to try to settle our differences with China and foster strong ties of friendship and cooperation. It is imperative that China not become a rival, but instead an ally.

These ideas are incredibly important, but Brzezinski fails in one enormous aspect--he does not outline exactly how the United States should pursue any of these goals. Indeed, some of them, such as encouraging a Japan-Korea reconciliation, seem outright absurd to me after living for two years in Korea and seeing the grassroots hatred and resentment toward Japan. In addition, Brzezinski completely dodges the issue of Israel's role in Middle Eastern instability, forming an enormous gap in his advice regarding reconciliation with countries such as Iran.

Brzezinski is heavily informed by theories of geopolitics that are at least a century old, but still highly applicable today, such as Halford J. Mackinder's regard of Central Asia as the geopolitical "Heartland" and "Pivot Point" in his 1904 paper to the Royal Geographical Society. Samuel P. Huntington's theories pop up from time-to-time, but Brzezinski seems much more influenced by Mackinder and Alfred Thayer Mahan.

Part of me fears that Brzezinski's ideas might be well beyond our means. Indeed, he tackles our own internal divisions and our lack of motivation as a people, and blames it on our infatuation with escapism and entertainment. And I am inclined to agree with him--the American people have no more desire to greatness. Brzezinski rightly draws parallels between the American empire's culture of decadence and that of Rome. He also notes that the American empire cannot last forever, and as other states grow in economic vitality, technological prowess, and military capacity, our sphere of hegemony will gradually diminish. Brzezinski urges that the United States make the best use of what time is left to try to leave a legacy of peacemaking by fostering stability and creating ties between nations that will foster a sense of global community and cooperation. Unfortunately, he leaves us in the dark in regard to the specifics of just how we are to accomplish these tasks.

The truth is, we cannot really accomplish any of the goals that Brzezinski sets out for us. His work is sublimely idealistic. The reality of American economic terrorism in South America, support of malevolent dictatorships that permitted American big business to exploit local populaces in an almost neocolonial fashion, and our recent wars to secure strategic dependencies in oil- and resource-rich parts of the world, we've squandered our good name.

But this is all surface. Is there anything to the criticisms that this book is, as Johannes Koeppl once called it, a "blueprint for dictatorship" in the United States and Europe?

“It is also a fact that America is too democratic at home to be autocratic abroad. This limits the use of America's power, especially its capacity for military intimidation. Never before has a populist democracy attained international supremacy. But the pursuit of power is not a goal that commands popular passion, except in conditions of a sudden threat or challenge to the public's sense of domestic well-being. The economic self-denial (that is, defense spending) and the human sacrifice (casualties, even among professional soldiers) required in the effort are uncongenial to democratic instincts. Democracy is inimical to imperial mobilization." --pp. 35

Well, the book doesn't appear critical of the United States' inability to sustain an empire. Brzezinski's detractors could compare this quote to the opening paragraph to the speech of the Athenian demagogue Cleon regarding the fate of Mytilene: "I have often before now been convinced that a democracy is incapable of empire... ." (Thucydides 3.37.1) Here Cleon harangues the Athenians for their weakness and sentimentality. In contrast, Brzezinski recognizes the limitations of democracy, and therefore seeks to establish a geopolitical outlook for American leadership with the hopes that world stability can be achieved without straining the American psyche in needless imperial adventurism.

But there is a very constant Machiavellian streak throughout the entire book that still can't help but chill the reader.

"Moreover, as America becomes an increasingly multi-cultural society, it may find it more difficult to fashion a consensus on foreign policy issues, except in the circumstance of a truly massive and widely perceived direct external threat." --pp. 211

Is this passage advice? Is Brzezinski actually advocating the creation of a monolithic enemy against whom to stir the American populace and fuel the desire and willingness to imperial war? If you aren't at least wondering about 9/11, then you either have a faith in the current state of American democracy that I find childlike, or an ignorance of realpolitik that I find childish.
Posted by Dave Cesarano at 11:00 AM