Book Review -- YOU GOTTA HAVE WA by Robert Whiting 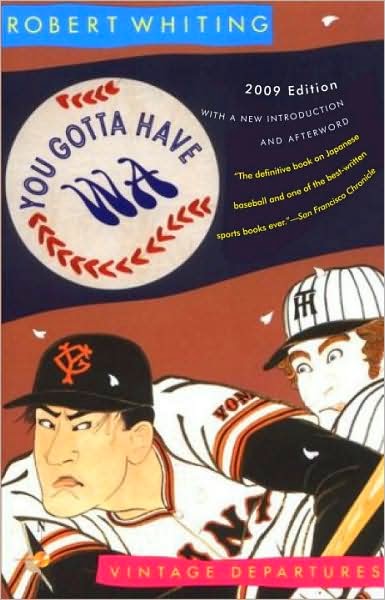 The cultural differences between the United States and Japan have fascinated many, many more people than just myself.  Although I'm not a huge fan of baseball, I can still appreciate it and the cultural impact that it has had on the United States and on many other countries that have adopted it as a professional sport.  What is so interesting about Japan with regards to baseball (in Japan, "野球"--yakyuu) is how the Japanese adopted the sport but not the American approach to the game.  Indeed, they approach it from a very similar standpoint that they do martial arts.

This is where Robert Whiting's book, You Gotta Have Wa, comes in.  First published in 1989, shortly after the height of the Japanese economic invasion of American markets, the book took advantage of the cultural climate in the States which, in the 1980s, was suddenly fascinated by the exotic strangeness combined with technological newness in the floating Japanese world and imperturbable stoicism of the Japanese businessman.  Films like Gung Ho, Mr. Baseball, and Rising Sun explored the American interaction with the Japanese in a way that was actually more revealing about American attitudes and prejudices than it truly managed to uncover the mysterious culture of the Land of the Rising Sun.

Decades later, the American public has a much greater appreciation for and understanding of Japanese culture.  Nevertheless, this can create a vast number of false assumptions and expectations for those Americans exposed to Japan only through their consumer culture and entertainment.  Japanese business and Japanese sports are still war and are still governed by the principles detailed in Sun Tzu's The Art of War.  In 2009 Whiting updated his book to incorporate the sudden and tremendously influential influx of Japanese players into the American MLB and consider recent developments in Japanese baseball, demonstrating that although there is a lot more cross-cultural understanding between the United States and Japan there are still very firm barriers between the two societies and their approach to the sport.

Whiting's book focuses on the concept of wa (和), the Japanese idea of harmony (which is, also, coincidentally, an ancient name for Japan itself derived from the Chinese name for the country, using a different ideograph--倭).  Harmony is integral to Japanese society and dictates almost all social interactions between Japanese people.  This both causes and is caused by the emphasis on the group welfare.  The individual is expected to sacrifice for the group.  Whiting explores the rigorous and demanding training regimen a Japanese baseball player is subjected to, often in direct conflict with what Western sports medicine determines as beneficial or harmful.  To the Japanese, though results are incredibly important, victory is attributed not to skill, ability, health, or anything physical at all but to attitude--the willingness to sacrifice oneself, the display of fighting spirit, determination, and will to do one's best.  Thus, the typical Japanese baseball team will wear itself out in pregame practice for four hours whereas an American player will engage in a few brief warm-up exercises.

Whiting explores the deep, cultural rifts between the Japanese and American approaches to baseball through the American players that head off to Japan, detailing their stories, their struggles with coaches and the companies that own the teams, their depiction in newspapers, their bitter fights against racism, and the hardships they endure because their teammates often resent their "special treatment."  Whiting injects thoughtful analysis of the damaging shortcomings that are harming the Japanese game, their inflexibility and inability to adapt to the Western model--a model built on science and medicine and an understanding of how the body conserves and expends energy.  Whiting does not use these analyses to attack Japanese society as a whole, and indeed demonstrates a deep appreciation for Japanese baseball.  His critique also serves to highlight the shortcomings of the American game as well--the frequent misbehavior of prima donna players, a lack of team spirit, poor attitudes, narcissism of American players, etc.  While the Americans have a lot to learn from the Japanese, it is also clear that we're a lot more accepting to an international approach to the game, as is evidenced by the frequent inclusion of South American, Caribbean, and Mexican players, and the fantastic success of Ichiro Suzuki with the New York Yankees.  The Japanese might adopt some practices of Western baseball but Whiting explains how the Japanese culture surrounding baseball is still very closed to foreign ideas.  Indeed, Whiting describes how the Japanese adaptation of the game makes it almost seem as though the Japanese believe they actually invented baseball.

Whiting's book was an absolute delight to read.  His narrative is heavy on facts and details without being over-encumbered by them.  His style of prose is evocative, clean, and direct, never turgid but still displaying a depth of vocabulary and a command of the English language that keeps the book vigorous yet tightly composed.  His analysis and criticism are not heavy handed and well-spaced throughout the narrative, which is well-sourced, documented, and researched.  Whiting brings a thoroughly professional level of scholarship and personal experience to his narrative.  I flew through this book and was determined to read more of Whiting's works the moment I set You Gotta Have Wa down.  Whiting has been quite prolific, especially on the subject of baseball and a number of his works have been translated into Japanese.

This book came to me with high recommendations and I cannot help but praise it as well.  I heartily encourage anyone with an interest in Japanese culture, baseball, the foreigner experience in Japan, or a combination of the three, to read You Gotta Have Wa. 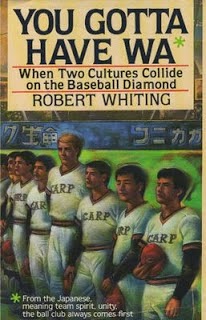 You Gotta Have Wa by Robert Whiting
Style:  A
Substance:  A
Overall:  A

Posted by Dave Cesarano at 3:46 AM