It's been about two weeks since I've last posted. A lot has happened since then. I took a vacation in Fukuoka, Japan during the Korean holiday of 추석 (Chuseok). That put me out-of-touch for the better part of that week. I'm stumbling through Democracy in America, but I find de Tocqueville to be incredibly depressing, since I can't help but lament how much American culture has abandoned its original shape and principles in favor of consumerism. The return from Japan bummed me out a great deal. I am deeply in love with that country, which causes no end of consternation with my Korean and other non-Korean associates here, who take my indifference toward Korea to mean I hate it (which I don't).

So, I decided to revisit an old flame in order to raise my spirits--Isaac Asimov's original Foundation Trilogy. 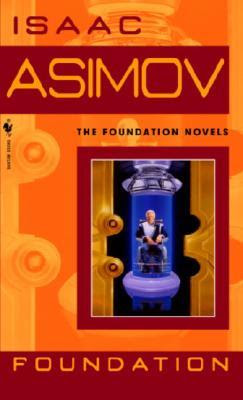 Foundation by Isaac Asimov
Prelude to Foundation and Forward the Foundation, although chronologically starting earlier than Foundation itself, aren't nearly as interesting, and are mostly redactive set-ups for the stories in this book.

The book is basically a chronological collection of short stories that were first published separately in the early 1940s in Astounding Magazine. These segments were collected into a single volume by Gnome Press in 1951 and chart the first hundred-fifty years of the Foundation. The premise is simple--the 12,000 year-old Galactic Empire (cue "The Imperial March") is declining, and will gradually collapse, though no one realizes it at the time but Hari Seldon. The mathematical genius, though the science of psychohistory, predicts the future, and works out how to shorten the 30,000-year barbaric interregnum to a brief 1,000-year rise of a Second Empire. The kernel of that Empire is the Foundation.

Asimov's prose is without flair, but that isn't necessarily bad, and is, indeed, refreshing in these days of word-bloat. Orwell would never have complained about Asimov's brevity, in fact it would have been seen as a strength. And indeed it is. The pacing and terseness of prose is an effect of the medium of transmission--the pulps. Like Lovecraft and Howard in the decades previous, Asimov's early work was, for the most part, serialized in magazines. This created a need for rapid pacing and swift plot development. Thus, since word-space was at a premium, many of the futuristic features (clothes, devices, buildings, vehicles) largely go undescribed, leaving the details up to the reader's imagination. After being raised on the visuals of Star Wars and the many incarnations of Star Trek, I had very little trouble filling in the gaps.

Asimov's writing is, of course, dated. Computers do not exist in his interstellar universe, simply because, in 1941, when he was writing, the ENIAC hadn't even been built yet. IBM was still NCR--National Cash Register. Laser weapons don't exist, but instead "nuclear blasts" are aimed at enemies. Granted, nuclear tools are present, but they are incredibly small--cars, planes, even flashlights and refrigerators run on perfectly safe atomic energy. These features can be abrasive to the modern reader who cannot understand why the characters pore over microfilm projectors rather than just pulling up entire books on their PDAs, but I could get past it easily.

The stories' plots develop rapidly. Most of them can easily be read in 45-minutes to an hour (depending on how fast you read). Characters have a tendency to be somewhat flat, but Asimov doesn't have a great deal of leg-room in which to work--they are flat quite by necessity in my opinion. The dialogue is rather bland and unimaginative, I'll admit, and this is actually the greatest weakness of the stories, because most of the action occurs offstage. We'll see characters plotting a coup, for example, and then, in the following chapter, they'll be discussing how their coup was successful, but we never actually see the coup happen. I'm not certain why. But this is a primary feature of Asimov's story-telling, and it feels like I'm watching a Greek play and not reading a science-fiction story some of the time.

Granted, this is a feature of much science-fiction. Although Frank Herbert wrote an incredible story with Dune, he wrote very little about the actual battle fought against the Harkonnen. It is as if any author writing science-fiction before Star Wars either couldn't grasp the ability to describe space-warfare or ground combat effectively or excitingly, or they believed it was far to gauche to explain the grittier aspects of their universes. After Star Wars you see a vast difference in attitude towards futuristic warfare, especially from Kevin J. Anderson and Dan Simmons (see my previous posts on the Hyperion books).

What makes this book so incredible is the "high concept" that drives the entire story. Asimov explores the concept of psychohistory--the capacity to predict the movements of vast numbers of people. What is fascinating is how each crisis that arises was predicted by imperial mathematician Hari Seldon's psychohistory. The Foundation weathers its storms simply by "going with the grain." Historical forces basically drive the Foundation through its evolution from a single, insignificant planet into a major political force on the edge of the galaxy. Asimov's main character of the story isn't anything more than the big concept itself. How do individuals interact with this concept is also a question. Although Asimov doesn't spend a great deal of time on it, one has to wonder how much individual initiative and free will count throughout the stories' development. The individuals that act throughout the various crises that the Foundation finds itself in all seem to operate in an almost Daoist fashion--they kind of "go with the flow"--there is always an obvious solution to all of the problems and the characters simply behave as if there were a natural impetus drawing them and their Foundation toward that solution. Asimov is obviously not a proponent of "great actor history" and seems to believe that people are (deterministically) a product of their space and time. 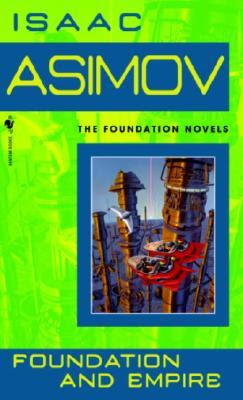 Foundation and Empire by Isaac Asimov
The first half of this book (about 90 pages) is the final death-throes of the Galactic Empire and their attempt to conquer the Foundation. And this is, perhaps, the most frustrating book to read.

On the upside, the book is full of intrigue and plotting. General Bel Riose is a believable military man who is as ruthless as he should be. We certainly get a feel, from the dialogue, for the different regional accents and dialects that have been developing during the past 200 years of Imperial disintegration. We also get the feel that the stories in Foundation are seen as history by the characters, who are, in many ways, scions of the first book's protagonists. Plans are hatched, and the ultimate victory of Seldon's Plan is ironic, but interesting. You have the definite feeling that history truly marches as Hari Seldon had plotted. The deeds of individuals are subsumed by psychohistory. Everything works out in such a way as to leave the reader somewhat satisfied regarding the historical inevitabilities that Seldon prepared. As an historian myself, I find this all fascinatingly reflective of structuralist views of history.

The second half is a bit longer and a bit better, and a major monkey-wrench is thrown into Seldon's Plan, and the reader is left wondering, How the heck is this going to turn out alright for the Foundation? This is good. The story in Part II is excellent, moves well, and has less off-stage action than the first. The characters are a bit more fleshed-out than in the first half, and the dialogue throughout this book is overall better than in Foundation. You can see how Asimov has been growing as a writer.

On the downside, again, there are no space battles. The entire book (both parts) are about war yet, disappointingly, action is described as having happened off-stage. In addition, I feel that the censors had a bit too much fun with one particularly foul-mouthed character, a professor with the penchant for saying, "unprintable" in place of any other "colorful adjective." I have a feeling that this was not the writer so much as the censor having a good time. In addition, transitions are handled horribly. There are no spaces between paragraphs when one scene ends and another begins. The reader is jerkily pulled from one situation to another perhaps minutes or hours later. This feature did not exist in Foundation, and it gives the book a slightly sloppy, not-quite-final-draft feel to it. 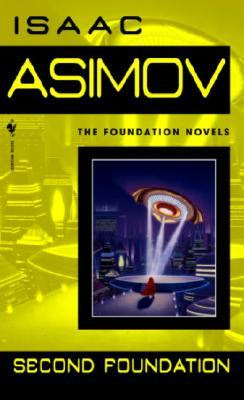 Second Foundation by Isaac Asimov
About a decade separates the last penstroke of this book from the first penstroke of The Psychohistorians, the opening story in Foundation, and the reader can see how far Asimov has come. Characters are far more dynamic and interesting in this book than in the previous volumes. Compared to other writers, however, Asimov's characters are still somewhat wooden in their behavior, with a few specific exceptions--and these exceptions do a lot in demonstrating Asimov's growth as a writer.

This book has even less action (as in, guns blazing) than the previous two. However, more things seem to be done on stage, as opposed to off, in this book and though it moves less it seems to pull the reader in a bit more. The bulk of the story is devoted to intrigue. If I were to compare this book to a film, it'd have to be Clerks, since the best parts are when characters are just sitting around talking to each other.

Asimov's dialogue develops the plot entirely, and carries it on it's shoulders. Dialogue is the key to this narrative. Asimov isn't interested in what is going on outside of the discussion room--indeed, the story reflects this. Gigantic space battles between fleets of warships are unimportant in the Grand Scheme of things. Interestingly, Asimov's narrative style and the elements of the story itself have finally achieved a sort of synthesis in this regard.

The dialogue serves to increase the tension and reveal what the characters are thinking--which ultimately revolve around the location of the Second Foundation and the reasoning behind all of their deductions. The book keeps you guessing. Just when you think you've found the Second Foundation, it turns out that they were one or two steps ahead of you and they have you all figured out.

Morality is ambiguous. I'm not certain if I really like the Second Foundationers, and can honestly see why the original Foundation might consider them a potential threat, although the two were originally supposed to work toward a single goal from "opposite ends of the galaxy."

The "big revelation" as to the location of the Second Foundation feels like Asimov painted himself into a corner. It just feels so forced, like he needed some enormous twist but was incapable of working it out in any way. Sure, the reasons and rationale behind the actual location of the Second Foundation do make sense, but it seems... well... stupid. Forced, as I had said earlier.

Nevertheless, this book is probably the most solid of the series and probably the most interesting one. Its pacing is good, things develop swiftly, and you definitely get a feel for the gigantic forces of history at work. All-in-all, a pretty solid book. But, still, like most of Asimov's novels, they are better read because of the uniqueness of his ideas rather than for the quality of his prose and the dynamism of his characters. And, believe-it-or-not, those ideas were better expressed in the original Foundation, despite his growth as a writer in this later book.


Foundation
Style B-
Substance B
Overall B-

Second Foundation
Style B-
Substance B-
Overall B-
Posted by Dave Cesarano at 11:25 AM